I’ve been to the historic Revere Tavern many times over the years dating back to when I was a child. However, I had been there only once since I started food blogging, and my review of it was based on a holiday buffet a few years ago. While the food was excellent, such a review does not do this establishment (in operation for nearly 280 years in one form or another) any justice. That is why I am scrapping the previous iteration and am going to present this. Such a decision was made based on the perfection of the evening. I will soon be coming up on 300 restaurant reviews and I can say without any shred of doubt that my visit on Valentine’s Day evening was one of the finest dining experiences I’ve ever had in my life.

Originally, Justin and I were supposed to be going to Lancaster the week after. When plans changed and we realized we were going to be spending Valentine’s Day in the area, I immediately booked a table. Knowing what a busy night this is for most restaurants, I made one request: that we could be seated near a fireplace if possible. The Revere Tavern has six or seven of them, all in working order, but still I did not know if it would actually come to fruition. Sure enough, we were sat in the first room directly in front of the fireplace. Even though I was aware of this restaurant’s charm and romantic ambiance, I was speechless. Justin, who had never been there, was also in shock. We literally had the best seat in the house, directly facing the fireplace.

It was at that moment I felt that even if the food was merely passable, it still would have been an incredible evening. But we did not have to worry about that. From one moment to the next, everything was spellbindingly amazing. The Revere Tavern offered Valentine-themed drink specials, a special food menu, and their full regular menu including the prime rib which is normally only served on weekends. Justin started with a Blue Diamond, one of the specials, which consisted of Verdi Spumante, Blue Curacao, and pineapple juice. It had the right balance of dry and sweet, and the blue color wonderfully off-set all of the red everywhere. I went with a gin martini, straight up, which also was fantastic. I ordered a second later on while he moved on to his usual Budweiser. 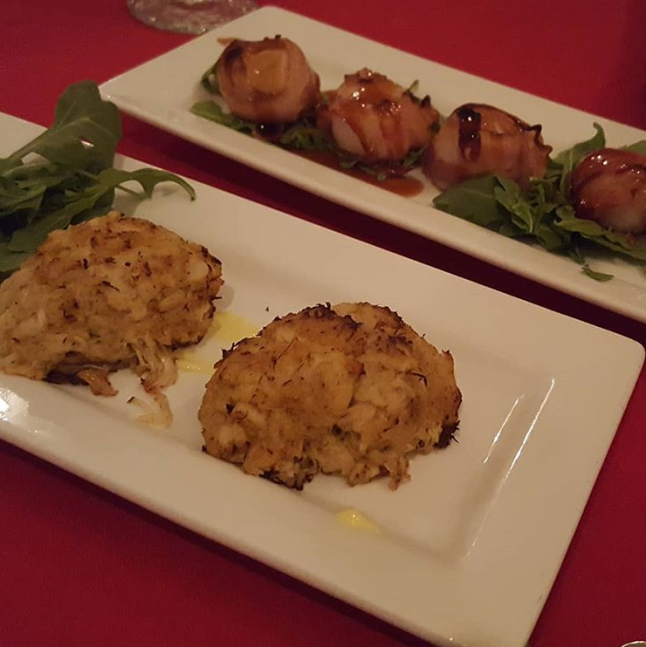 For appetizers, we selected the crab cake and the bacon-wrapped scallops, the latter of which was also on the specials menu. The crab cake was a large portion, divided in two and drizzled with a lemon aioli. The cake itself was entirely lump crab meat with hardly any breading. It delightfully fell apart as I tried to move it from the platter to my plate.  It had a freshness that you cannot normally get in the middle of farm country. The other appetizer was also top-notch. The bacon was crisp, the scallops tender, and it too had a drizzle of some kind of sauce reminiscent of a ponzu. The fire roared as we inhaled all of this delicious food. 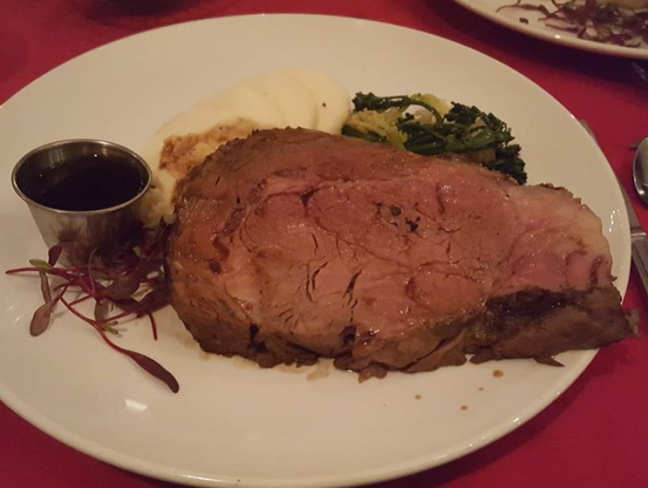 I had barely looked at the menu when our waitress told us the prime rib was available. On that note, I promptly set it down because I now knew what I was ordering. The portion was massive, practically hanging off the plate. The menu said 14-16 ounces, but it seemed larger. The meat to fat ratio was right on, the edges had a black pepper rub, and it was cooked to my exact request of medium-rare. This was the best prime rib I’ve ever had. I’m sorry that I couldn’t finish it, because I was just too full. It came with a side of ultra-creamy piped mashed potato and sautéed broccolini. For his entrée, Justin ordered the almond-encrusted chicken which he said was outstanding. I personally enjoyed the honey Dijon cream sauce that accompanied his. Both of our meals came with a nice garden salad. We could not conceive of having another bite to eat but it was Valentine’s Day after all. So we took it upon ourselves to have the brownie sundae which was overly large and left us at capacity. A warmed brownie was topped with vanilla ice cream, caramel and chocolate sauces, and walnuts. It was served with a chocolate covered strawberry, which I assume was included because of the theme of the evening. We also added two Calypso coffees, which included rum and Kahlua. These certainly got the job done by way of strength. I could taste that rum in every sip. They also came with a stick of rock-candy-like sugar, which was a really cool way of stirring in some sweetness without having to add a whole packet. As dessert was finished, I stared into the fire wishing the night did not have to end.

To mention the service, it was par excellence. I am almost certain I had our waitress when I was a child. She looked familiar. She was great, bringing kindness and attentiveness to our table without being overbearing. She did not push drinks, had a sense of humor, and was nice enough to take our picture by the fireplace after we finished eating. There was never any rush and she asked us if we wanted to put appetizers in before our meal order so we could take our time. I wish I knew her name to thank her publicly (EDIT: her name is Kelly!). Actually, I would like to thank the Revere Tavern as a whole for providing a dining experience that I could liken to “putting on a show”. Starting with accommodating my reservation request of being seated near a fireplace to bringing one course after another of fine food and drinks by a flawless staff, it could not have been done any better. For that, I have no choice but to give them 5 out of 5 stars, which is the first of such rating I’ve ever given in Pennsylvania. This magical evening will be in my memories forever. I hope everyone else there that night had an equal experience!