Making Friends at the Revere Tavern

This is one of those posts where I know exactly what I want to say but have to figure out just how to say it. Sometimes an experience can be that awesome. If I did not give the Revere Tavern a 5-star rating in February, I would have done so on this most recent trip in April. Following that review, and the subsequent social media explosion, I was thanked by the owner (Tina) and several staff members for the write-up. I had mentioned in another post that I do not review restaurants for that reason, but it is always great to get feedback, and always appreciated when the business shares my writing with their followers. The Revere Tavern has a heck of a following, as likes and shares poured in. I really was awestruck. It was then that Tina reached out saying to let her know next time we were coming to Lancaster, because she wanted us to stay at their hotel (the Revere Best Western Plus). Both the restaurant and hotel have been in their family for over 50 years.

We gladly took her up on this generous offer, and finished a two-night stay there earlier this week. She also had a gift bag for us which included a blow-up of the review I wrote. It was on this trip that I finally got to meet Tina and also catch up with some of the staff members written about in the review. Justin and I dined there on Monday night. Kelly, our original server, was not working that night but still came by to say hello, which was really nice of her. We had Angela this time around and she was superb as well. The staff continues to be simply impeccable. I enjoyed a perfectly cooked NY strip steak while Justin had Chicken Chesapeake. Our appetizers were the fried mozzarella (freshly made and fried to a crisp) and spinach-artichoke dip, which came steaming hot and loaded with cheese. Any progress I made recently at the gym was deterred on this night. I washed it down with some martinis and Justin tried the house special pineapple sangria. 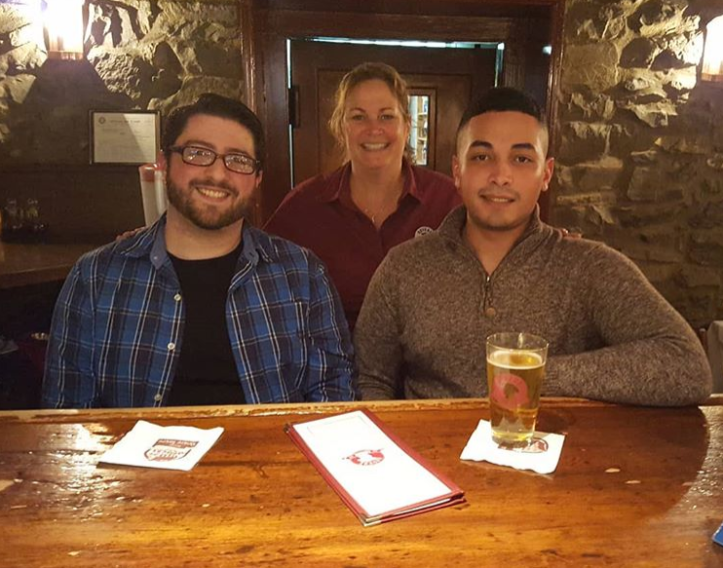 We had missed Tina on Monday, who was working earlier in the day. We decided we would eat at Revere the second night too, in the bar area which is part of the building’s original construction. Combine some good drinks with a nearly 300 year old building, and this history nerd is in heaven. It was a wonderful experience chatting with Tina and getting to know each other (on and off for nearly four hours). We saw Angela again (who had several bar/restaurant recommendations for us and said she would take us on a dive bar tour of Lancaster!) and then met Hunter, the bartender. He is only 20, but has the skill and personality of a veteran. He mentioned he had made our drinks that night and thanked me for noting them in the review because, “Most people only talk about the food”. To me, drinks are just as important.

It was enjoyable getting to know him too. Like me, he is a lover of history and wants to be a teacher, so we share that commonality. Hunter makes an excellent dry martini and was ever-ready with suggestions for Justin who was being adventurous aside from his usual Budweiser. It was margarita night, so we couldn’t help but try those too. We picked on some old bay wings and chicken tacos, also great, and talked the night away with Tina, Hunter, Angela, and a couple from south Jersey who was seated near us.

It seemed like it now was after-hours when I got to sample some of Revere’s new bar ingredients, and we experimented with possible new cocktails. Hunter definitely has a bright future ahead of him. It was during all of this, especially after asking for any funny stories Tina had from many years of working there, that I realized the Revere Tavern was no longer just a restaurant—we had become friends. It is funny how that works sometimes, how chance it is when certain people come into contact with each other. This restaurant, already special, was now firmly cemented in our hearts as the place to go when in Lancaster.

To the entire staff at Revere Tavern, you are excellent and I thank you. To anyone reading this post who is traveling to Lancaster, make sure you get over there. Whether you want fine cuisine in the dining room or light food and drinks in the bar, you cannot go wrong. Hope to see you again soon!