I once read somewhere that New Jersey is second only to India and its surrounding area in terms of where you can actually get quality Indian food. After a few experiences I have had in Pennsylvania, I started to believe that was true…until now. Justin and I wanted to explore Lancaster City. Even though I have been visiting the area for my entire life, the City was foreign to me. We figured we could get lunch and start from there. I suggested Himalayan Curry and Grill. “I thought you never really went to the city?” Justin asked. I responded with, “I haven’t, but I follow this place on Instagram.” I then explained that a few years ago when browsing through travel sites, Himalayan consistently came up as one of the best restaurants in Lancaster. I started following them hoping that one day I could give this Indian and Nepalese restaurant a try.

In we walked, for lunch on Valentine’s Day, to a packed dining room. We were definitely not in the country anymore. This restaurant immediately gave off city vibes. The dining area was small and filled to capacity. The tables were close to each other. Along the wall sat a large buffet arrangement. The aroma inside was mouth-watering—actually, we could smell the cooking outside while walking down the street. We followed the scent. This was one of those times that I knew we would not be disappointed.

After about a 15 minute wait, we were sat at a snug table. Having never been there before, the buffet seemed like the logical option so we could try a bit of everything. It was only $11 per person too, which was jaw-dropping for quality of this magnitude at such a location. We put in an order of garlic naan, and attacked the buffet. It was very similar to what Neelam near my hometown puts out. There was an array of cold sauces and chutneys, salad, naan, vegetable pakora, and rice. For entrees, there was spinach and chickpeas, chicken korma, tandoori chicken, a dish containing cubes of cottage cheese in a creamy sauce comparable to a makhni, chicken tikka masala, and perhaps a couple of others which I cannot remember. 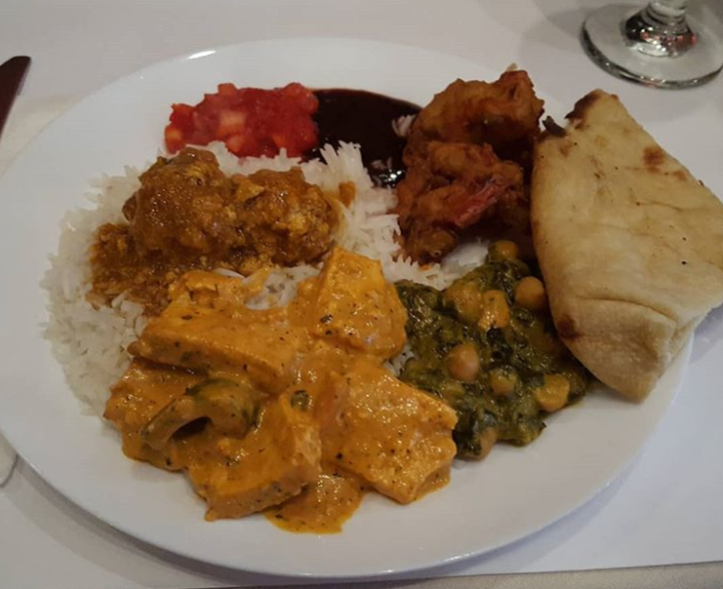 My favorites were without a doubt the spinach with chickpeas, which was just loose enough that it became almost like a sauce in itself. It was delicious when mixed in with my rice or scooped up with some naan. I found myself a tad surprised that I could not stop eating this presumably vegan dish. The other option which made me wish I lived in Lancaster was the cottage cheese selection. Cubes of it were tossed in a creamy sauce with chunks of peppers and spices. It was perfectly prepared: the cheese was tender but firm. The sauce was rich and flavorful. Dredging naan through it was almost a religious experience. I enjoyed all that I ate, but I needed to point out these two dishes. Justin had everything I did, but tandoori chicken in addition. He loved every bite. I couldn’t even get to that, or the chicken tikka masala (the sauce was a bit looser than what I am used to), because I was just too full from everything else. This also meant foregoing a refreshing-looking rice pudding dessert.

Often times it is hard to rate a restaurant based on a buffet. However, here at Himalayan Curry and Grill, I was impressed. This was like a “Greatest Hits” of Indian food. Every dish was steaming hot. There is nothing worse than a buffet where delicious food sits at a lukewarm temperature. This food was so hot that steam emanated every time someone lifted the lid from the serving trays and it was still smoking by the time I got to the table. Had I wanted to be the annoying tourist taking pictures of everything, I would have snapped one of the buffet itself. The staff too was wonderful—warm, pleasant, and attentive. You feel at home when you walk in. This place was so good that I cannot wait to come back. I want to try it for dinner and hit up the Nepalese section on their menu. It will become a mainstay in my Lancaster dining from this moment forward. 4.5 out of 5 stars, and with another visit like this, will go even higher!

Himalayan Curry and Grill is located at 22 East Orange Street in Lancaster, PA.