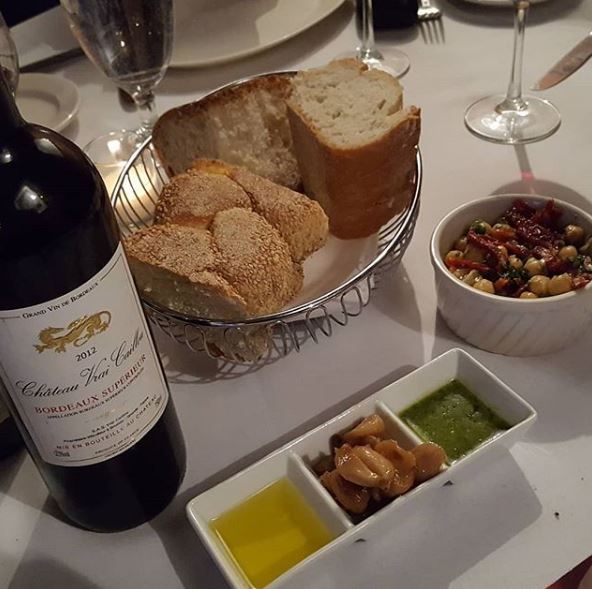 I opened the menu to see the following inscription on the bottom of one of the pages: “We ask that you refrain from cell phone use unless you are instagramming or facebooking our delicious cuisine.” As an avid food blogger (I despise the term “foodie” as you know), this was license to go crazy with pictures on this night. Not just my food or appetizers, but everyone’s at the table. Usually, I try to avoid that as not to inconvenience the others in our group, but my mom, Justin, and good friends Roy and Joanne were egging me on to capture it all. Such a revelation on a menu shows that a restaurant like La Cipollina is one with the times.

People are on their phones way too much, so much so that often times it impedes on the quality of a dining experience whether with our with friends, family, or as a couple. They acknowledge this societal flaw yet recognize the social media food scene. Major props to them. This Freehold dining establishment which has been here forever manages to blend the old with the new. This is classic, almost old-fashioned Italian fine dining. But it is not stuffy or stuck in time. La Cipollina has their own hashtags for goodness sake: one for the restaurant, and one for their head chef Matt Higgins.

Our group was sat by a kind hostess who could have been your Italian grandmother. She then introduced the maitre d’ who came over to open our bottles of wine and pour the first round of glasses (this place is a BYOB). He then introduced us to the head waiter who recited, in detail, the specials of the night, and also introduced his back waiter. All were friendly and attentive, without being overbearing. Our group needed time to talk and hang out. Without even having to mention this, we were left alone to chat as we pleased. The wait staff never bothered or rushed us in any way. We ended up being at this table for a solid three hours. Our reservation was for 6 p.m. and we were the only people in the place. As the night progressed, the dining room swelled to about five or six tables.

About 45 minutes in, music started to play. There was a live musician whose name I won’t mention. Though it was literally just our table, he played as if seated in front of a busy crowd. He cranked out one rock song after another, and quite annoyingly so. Actually, it was a kind of grotesque so-bad-its-good entertainment, hearing him belch out “Sweet Caroline” to an empty dining room and no patron drunk enough to shout “Oh! Oh! Oh!” at that opportune moment two or three times in the song. It became a game between myself, Justin, and Joanne, to humorously (and quietly) sing along and roll our eyes in between courses.

Once this guy passionately intoned Jon Bon Jovi’s “Wanted Dead or Alive”, it became too much. I silently wished I had enough alcohol in me to get up, walk over to him, and sing along into his mic. We could have had a duet. He even had a multicolored light which blinked randomly during each song.  Such music was not befitting a fine restaurant like La Cipollina. Not that any music was needed, but the Andrea Bocelli softly playing on the speakers when we arrived did more for ambiance than this one-man spectacle ever could. The only positive I have is that he was not too loud. He too was with the times. The maitre d’ came over with a card saying we could text song requests to a certain phone number and he would play them. The card advertised him knowing a library of 1,400 songs from the 1950’s until today. Justin sent three as a test and he didn’t play any of them. We’re probably better for it. My only guess is that he is either related to the owner or was the owner himself. How else could such obnoxiousness be tolerated? And if I may say, his gym shorts and t-shirt attire somewhat clashed with the tuxedos worn by the rest of the staff. 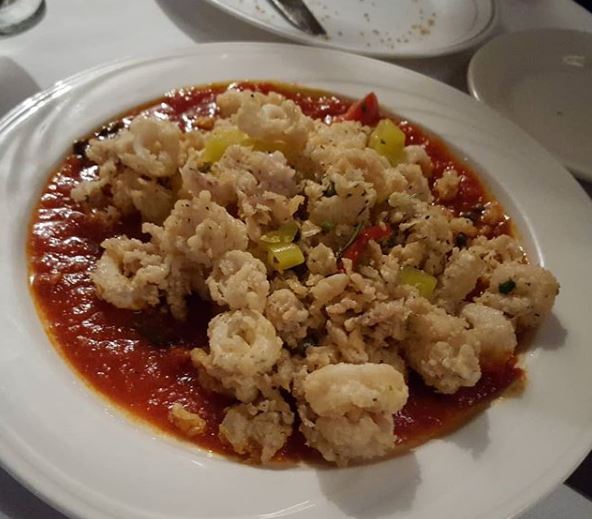 I hate to start a review off with that and not food, but such an entity dominated this dining experience. But we were not there for music. It was made tolerable in spurts by a glorious basket of bread and accouterments which included a bowl of chick pea and sun-dried tomato salad, and a small tray of roasted garlic cloves, olive oil, and pesto sauce. Our buddy’s renditions of a string of Beatles hits was forgotten when the fried calamari hit the table. One order was shared by Roy and my mom, another by Justin and I. This was a large portion of crisply flash-fried calamari. It may be the best I have ever had. It was served over a zesty marinara sauce and included chopped cherry peppers that added additional spice. Despite the sauce, the calamari never softened. The both of us scarfed it down and I kept reaching for more bread to drag through that sauce. Joanne, meanwhile, had an excellent looking appetizer that consisted of prosciutto, melon, and fresh mozzarella. 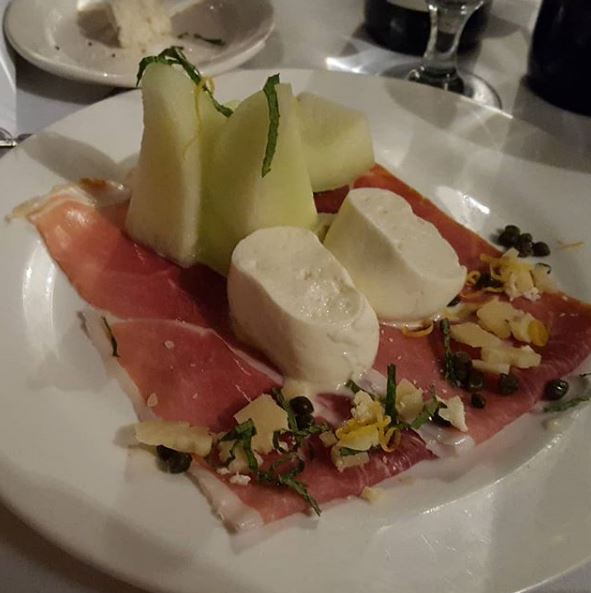 After the appetizer plates were cleared, more bread arrived. We had a few minutes to relax, talk, and enjoy our wine. And catch more tunes. Just as I was ready to stand up and yell “Freebird!”, the entrees came. Roy had the rack of lamb special, Joanne the Veal Scallopini, my mom went with the seafood fra diavolo, Justin the French Chicken Breast, and I with the Berkshire Pork Chop. I can honestly say that I have never ordered a pork chop in a restaurant before. But I did not feel like steak or chicken and this dish’s preparation which included cherry peppers (again), onions, shiitake mushrooms, Gaeta olives, and plum tomatoes with a side of whipped potatoes was calling my name. It ended up being massive, probably near a pound in weight.

It was sliced in three and served with the bone that had additional meat on it. The outer layer was well-seasoned and crispy. The inside was tender and juicy. While the middle was slightly pink (not really visible in the picture due to the light), I remember reading somewhere that you have a better chance of being hit by lightning than contracting trichinosis from under-cooked pork. The bottom of the dish which contained all of these vegetables and was spicy because of the peppers really put this over the top. I enjoyed it so much that if I ever went back, I would probably order the same thing. Hats off to Chef Matt Higgins. There was not a single complaint from anyone at the table. There wasn’t much talking at this point, which is a sign everyone is enjoying their meals.

I enjoyed the environment that La Cipollina had to offer. It was dimly lit, the walls exposed brick, and we were allowed to relax without ever feeling rushed. Prices are on the high side, but the quality was there. Being a BYOB certainly helps. If I was rating this place on food and service alone, it would be hard to not give it a 4.5 star rating. However, reviews must be all-encompassing, and the music was really enough to knock it down slightly. So, overall, I am giving this restaurant a 4 out of 5 stars. I would definitely come back for a special occasion and recommend it (especially the pork chop) to others.

La Cipollina is located at 16 West Main Street A in Freehold, NJ.