The morning started innocently enough. I was on my way to run some errands and grab a bagel and coffee in Aberdeen when my friend called and asked if I wanted to get breakfast at Le Peep. He had been raving about it for as long as I can remember. So, I made a U-turn and headed on over. What went from aspirations of a toasted bagel and butter turned into one of the more luxurious breakfasts I’ve probably ever had. If I needed to describe Le Peep in as few words as possible, I would say it is comparable to the Turning Point chain. Breakfast, brunch, and lunch. Done. 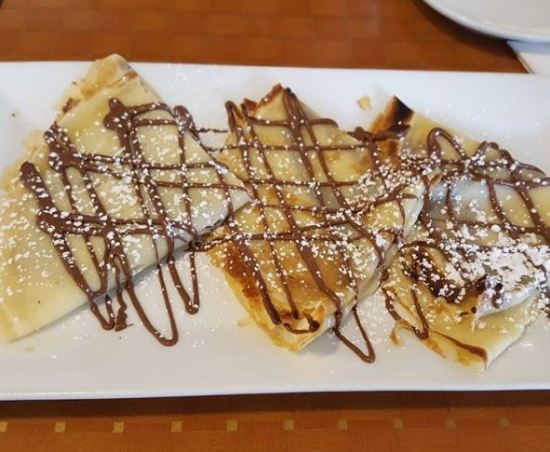 I sipped a cup of LaVazza coffee as I browsed the menu. There were too many good choices. Omelettes, pancakes and waffles, sandwiches, and paninis. I was drawn to the sandwich section but was still in the mood for breakfast. He was getting the lobster omelette with grits instead of what they call “peasant potatoes”, and I decided to go with that as well. We also split an order of Nutella crepes, because why not at this point? Believe it or not, these were the first crepes I have ever had. For this reason, I have nothing to compare them too. They were good—light and kind of spongy. A thin pancake folded over and stuffed with some of the sugary hazelnut spread. As an appetizer, the crepes hit the spot. For a meal, though, the serving would probably not be enough to satisfy anyone with even a moderate hunger. Indeed, they fill up a plate and are presented beautifully, but remember how much food is actually there. 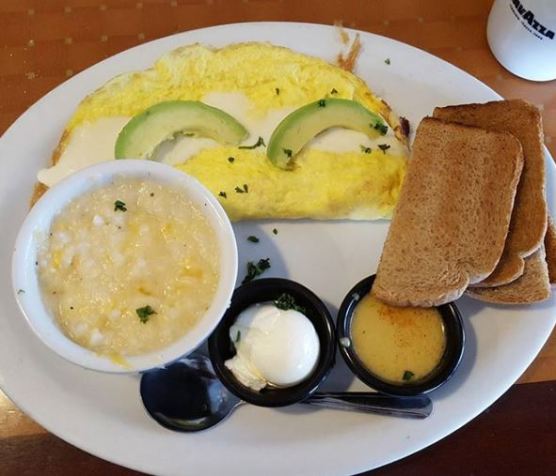 Now, onto that omelette. Holy hell, it was something else. A decent amount of lobster for $11.79 stuffed into the eggs. It looked as if they were mixed with cheese. There was then another drizzle of cheese sauce across the top with two slices of avocado. On the side were cups each of butter and Hollandaise sauce. This was as rich as you could get, and that is without the super creamy and cheesy grits. The spoon would have probably stood up straight inside of it if I stabbed it down. Throw in two slices of wheat toast (excellent when spread with butter and that avocado, mashed) and this is a cross between what you might call either a power breakfast or a glutton’s delight.

My only complaint at Le Peep was my friend’s drink—a pumpkin smoothie. It was not particularly tasty and was $5.99 for what I consider to be a tiny amount. Everything else was fine. I am going to give them 3.5 out of 5 stars. For a chain breakfast place, that’s superb.  Prices, portions, and quality; they have it all here.