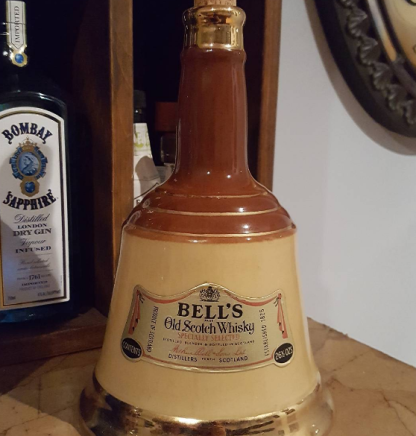 My friend wanted to give me a gift because I was going to help her at an estate sale she was running (the same one I snagged this ash tray at). She presented me with this beautiful decanter—a bell—which she had assumed could only be used for decorative purposes. It was heavy, and you could barely hear any liquid sloshing around inside. Actually, what she said was, “The stuff inside is probably no good anymore, but at least you’ll have a nice decanter for your bar”. Either way, I was thrilled. It’s not often one could find decanters like this anymore. The drink in question was Bell’s Old Scotch Whisky, and it was probably from the 1970’s.

When I got home, though, I realized that the cork was firmly in place. Perhaps it was caused by age, I had no idea. So just like what I did with that 40-year-old bottle of Drambuie I found (also at an estate sale), I forced the cork (which was starting to disintegrate) back into the bottle. Then comes the process of straining out the whiskey into another bottle, mashing up the cork in the bottom of the original, washing out all the bits and pieces with water, letting it dry, and then straining the product back again. To my surprise, the amount indeed filled up an entire 750 ML bottle. This Scotch was intact. It had never been opened. Now I was intrigued.

With the Drambuie, it almost wasn’t worth the trouble. The taste was there, but age had damaged the sweetened liqueur. It had a slightly sour note, like The Knot, just not as pleasant. But with this Bell’s Scotch, there would be no such problem. Air had not damaged it.  Time had worked its magic. The first sip put me in heaven. It was as smooth as anything, comparable to a Johnnie Walker Blue Label, with only a soft bite that had not worn off. The result upon drinking was the same, warming feeling that encompassed my entire body. It didn’t take like old Scotch that had been laying around, but some kind of aged perfection.

I went online to see what I could find out, and if it had a value. Empty decanters can sell on Ebay for around $50. It was when I started looking for unopened bottles that my jaw-dropped. Master of Malt, the online whiskey warehouse apparently still has a few left over from the 1970’s (there’s no way to determine an exact year). They currently sell for $438.16, or more than double what a brand new Blue Label would cost. I quickly phoned her and she was in shock. I can’t imagine the product that is selling for big bucks would taste any differently, and is likely to encounter the same problem with the cork because that’s just something that happens with age.

This decanter of Bell’s Scotch proudly sits on my bar, in reserve for special occasions. Anyone who points it out gets to hear this story. Maybe only whisky nuts would appreciate it, but for me, it’s part of the chase when doing estate sales, flea markets, or going antiquing. You just never know what you might find.