Beware: The “Cash Discount” is Coming

I first saw a note stating a cash discount at a restaurant I frequent three or four months ago. I remember thinking that this was only the beginning. Surcharges are nothing new. With rising costs in everything, it is only natural that businesses pass on the charge to the customer. However, with what we are seeing now, it is a bit misleading. Below are two notes from separate restaurants (ironically both in Red Bank—one was taken by me, the other is shared from a food forum posting) offering, respectively, a “cash discount” and “cash adjustment discount” for customers paying cash rather than using a credit or debit card. At first glance, it seems logical and almost goes unnoticed. But when you examine the menu, you realize there is no actual discount. The “discount” is just paying the original price. 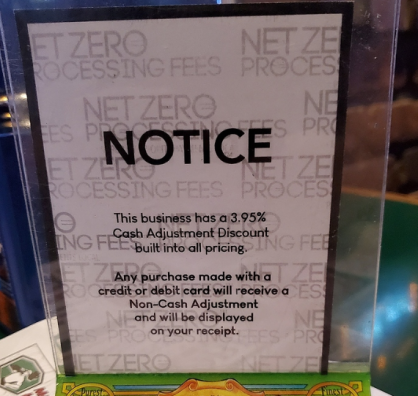 While both of these examples lead to less than $4 worth of charges for every $100 you spend, this is another example of nickel-and-diming within the hospitality industry. I do not want this opinion to negatively affect these two specific restaurants, which is why I left their names out. I am trying to see both sides of the story myself. Part of me is thinking that it makes sense because there are no transaction fees for cash, so of course those using it should pay less because it is not costing the business any additional money. We also rarely get frustrated when a business asks for a $10 minimum charge for card-carrying customers. The other part of me says, “More fees? Really?” So far, such changes have been met with more disdain than understanding. A third business (in Matawan) experimented with a credit card surcharge a few weeks ago and did away with it after only a couple of days due to angry backlash…which also resulted in the owner posting an angry diatribe directed at customers on the restaurant’s Facebook page.

However, my concern is less about the 40 cents extra my burger is going to cost and more about this being the slippery slope to something more. The second note posted above gives a specific reason for the upcharge: a “change in minimum wage laws”. In New Jersey, the minimum wage is set to increase to $15 by 2024. It recently reached $10 this July 1. What, dare I ask, will prices and fees look like in a year or two, much less in 2024?

On the restaurant’s side, this is a damned if you do, damned if you don’t situation. They are trying to do the right thing by not raising costs for everyone, but somehow, there would be less backlash if they simply changed the prices on their menu by raising everything 35-40 cents, which is less than price increases normally are. How often do you hear someone complain that a restaurant raised its prices? When was the last time an Italian joint’s chicken parm going from $15.95 to $16.50 caused a riot? Not often, because it is expected. But to specifically target a group of customers by way of payment, that receives an outcry. It will be interesting to see where this goes. Keep an eye out, because once more restaurants catch wind of this, I am sure they will switch over to this “cash discount” scheme. Can I call it a scheme, or is that too harsh? I just wish people would call things what they are.