Duke Bourbon is More than Just a Whiskey

When I was growing up, both of my parents worked. This meant, at an early and impressionable age, I was left in the care of my grandmother when I got home from school. It was at this time that I was introduced to John Wayne movies, among other “oldies”. Before I was ever a film nerd, before I knew anything at all about the real John Wayne, I watched his movies over and over again with grandma (who is now 90 and still loves The Duke), whether they were on television or asking to buy a VHS or DVD after seeing them. I can only image, had all this happened now, with virtually Wayne’s entire library available via On-Demand, how much more of a fan I would have become at such a young age. 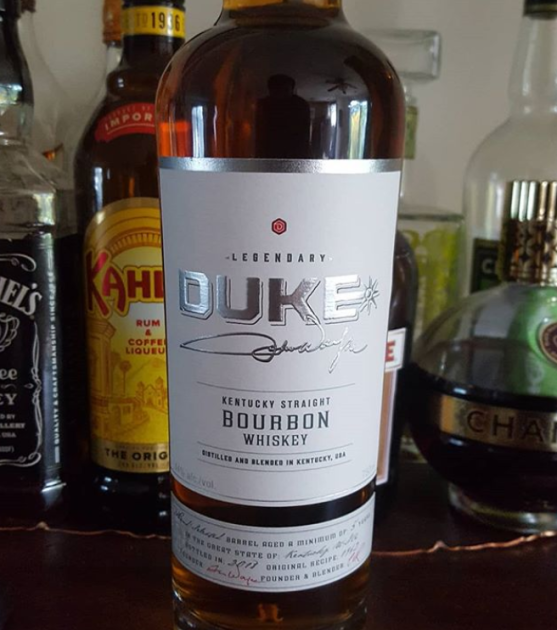 Now at 27 years old, I still consider John Wayne my favorite actor. We would have been diametrically opposed politically (this I realized as I entered my high school years) but I am one of those people who can separate someone’s politics or viewpoints from their art and work. I’m also not the most patriotic person in the world, but I love this country and probably could not live anywhere else. I always admired John Wayne’s love of America and outspoken nature regarding this country and our freedoms, and his support of the troops. In having a philosophical conversation with Justin the other day (ironically over a glass or two of whiskey), he asked me, “What do you think it means to be American?” The answer I mustered up was a simple, “John Wayne”, before elaborating (much to his surprise) my affection and passion for The Duke, his films, and what he stands for.

Some of Wayne’s politics were controversial, but in this day and age of constant vitriol, I look to the friendships which he shared with people of all kinds and backgrounds. There are many stories of him being good friends with people who did not share his views. It seemed that being human outshone which side of the aisle people were on. He was a man of morals and honor, and could put politics aside and cherish a friendship. Such a notion is quickly being lost today.

Perhaps the biggest impact Wayne’s films had on me was my introduction to the siege and battle of the Alamo. No, it was not Walt Disney’s Davy Crockett like it was for so many across generations and spanning decades. It was the 1960 epic The Alamo which he starred in, directed, and produced. It inspired a love so deep that I read every book and watched every film I could on the subject. My parents took this Jersey boy to San Antonio to see the real Alamo for my 16th birthday in 2007. Much to my dad’s vexation, this also meant a nearly two-hour drive to the John Wayne Alamo movie set in Bracketville, which has since closed down.

When my father passed away unexpectedly in 2017 and my world was quite literally flipped upside-down, I turned to two people to get me through it: Anthony Bourdain and his travel shows, and John Wayne and his movies. There was something comforting in settling in to watch a familiar movie and see a familiar face. Some might think that trivial, but to anyone who has ever experienced a real tragedy, you may know exactly what I mean. I threw myself into work and tried to stay as busy as possible, but much of my free time was spent watching John Wayne.

I probably own 30 or so of his films on Blu-Ray, and still catch myself setting the DVR whenever one of his movies comes on TV. Just a few weeks ago, it was McLintock! on TCM. Though there was playoff hockey on, there I was watching this 50+ year old western for the umpteenth time. While I was at it, I poured myself a glass of Duke Bourbon. Justin bought me a bottle of it for Easter this year. It was the second time I ever had it, the first being right after it came out. As a whiskey fan, this was a must-have. As I researched further, I was intrigued to find out that John Wayne had extensive tasting notes for whiskeys he wanted to develop. Sealed since his death was a collection that also included lost memoirs and a vast liquor collection. He died before producing his own ever came to fruition.

Thankfully, his son Ethan (also an actor who I feel like I have watched my entire life) resurrected John Wayne’s plans and founded Duke Spirits, which offers a Kentucky Straight Bourbon (the one I have, which uses a recipe from 1962), a more aged “Grand Cru” Founder’s Reserve, and a Double Barrel Rye. The baseline bourbon is a highly enjoyable blend of corn, rye, and barley. Such a reliance on corn is not a surprise, given it is exactly the kind of whiskey we would have expected Wayne to be drinking in the plethora of westerns he starred in.

To me, this bourbon does come across as a bit spicy. It is one of those rare whiskeys which manages to be smooth and have a kick. At first, the whiskey gently hits your tongue but then almost immediately gives way to a peppery spice. A warming sensation then takes over as it smooths out with hints of toasted nuts and a mild sweetness lingers on the palate. Is this what John Wayne would have wanted? We will never know for sure, but it must be damn close. There are a lot of novelty spirits out there with a cool name, interesting label, and storied provenance, but when you get down to it, the drink itself is nothing more than a souvenir bottle with a barely drinkable product inside meant to take advantage of die-hard fans. Duke Spirits is not one of those. This, my friends, is the real deal. The Duke would be proud of Duke Bourbon.

This was more of a story than a review, but then again, this whiskey is much more than just a whiskey. If you don’t care for John Wayne or this story one way or the other, this is still an excellent drink to pour. For those who are fans like myself, young or old, this is an experience. It is a chance to connect with a legend—dare I say it, to take this larger-than-life figure and make him human just by pouring a drink and maybe sharing it with someone else. It is the closest we will ever get to interacting with our favorite actor. For that reason, I will try to always keep a bottle of Duke Bourbon on my bar.