For years, I drove past Vic’s Wayside Inn thinking that from the outside it looked like a stereotypical locals only bar where everyone would turn around and look at you when walking in. Maybe even the music would stop too. As Justin and I entered, I still thought that would be the case. But I was wrong. I’m sure that 95% of tourists would not venture into this place, but we love dive bars so we needed to give it a shot. Don’t get me wrong: I was a little scared when we opened the door and saw the interior. It looked like a tough crowd. Older. Rough and tumble. Biker dudes with long beards. “Okay, we’ll just have one drink and be out of here”, I thought to myself. Our plan for the evening was to eat dinner there. I had called in the afternoon and asked if they had food. The bartender who answered said they had a small but quality menu with “the best burger in town” and even going so far as to advertise their crab legs. As someone who eats frequently in Pennsylvania, I can say that everyone and their mother has “the best burger in town”.

Anyway, we walked in and grabbed a seat at a table. To my surprise, no one turned around and looked. The world didn’t end. Everyone was too busy minding their own business—watching the lone TV, staring into their drinks, or browsing a SmartPhone. The bartender, a pleasant young lady whose name escapes me, greeted us. A few minutes later she came over to take our drink order. I had a Jack Daniel’s on the rocks and Justin got a whole pitcher of Budweiser after finding out it was only $11.75. We asked for a menu and she brought it over to us. I had a few minutes to look around. I loved the atmosphere. The walls were covered in bumper stickers and metal signs. The ceiling had dollar bills tacked with messages from customers. The tables and chairs were beat up. There was a pool table, shuffleboard, and a dart board. Cigarette smoke wafted across the room. I couldn’t wait to light up an American Spirit. It was the time and place.

She brought us a menu and had a seat. I was expecting a “You ain’t from around here, are ya?” but instead she was very friendly. Justin playfully asked, “So…would you eat out of that kitchen?” and she responded, without offense, “Well, I sure would. After all, its my sister in the kitchen doing the cooking. We’re clean. Its clean back there. I’m here all day on shift and you can be damn sure I eat here.” She was proud of the place. Question answered, he ordered the best burger in town with cheese and bacon while I had a cheesesteak. When she asked, “What sauce would you like?” I was confused. She then added, “Do you want any ketchup or steak sauce?” Never having previously eaten a cheesesteak with steak sauce, I said I would try it. I also asked for some fried onions on it. We shared a basket of onion rings. 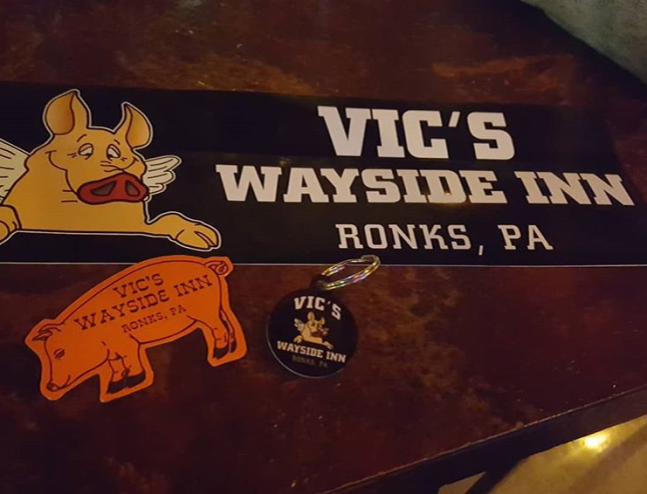 As our conversation continued, I mentioned that I had been coming to Lancaster my whole life and drove past Vic’s a million times but never stopped in. She got up and said she had some keepsakes for us. A minute later, she brought us each a bumper sticker, magnet, and key chain. It was a moment like this, combined with the atmosphere and food to come which endeared me to Vic’s. I actually rank it right up there with my two favorite bars of all-time: John and Peter’s in New Hope, PA and my regular hangout The Globe in Red Bank, NJ.

The food ended up being delicious. Justin said it was the best burger he’s had in PA while my cheesesteak was out of this world. Truly. The steak was chopped finely and mixed with the cheese and steak sauce. This simple addition made the sandwich slightly sweet. Was this the best cheesesteak I’ve ever had? Surely this dive could not be capable? I’m still thinking about it. My only complaint was the bread not being sturdy enough to hold the large portion of meat they put on it. It was not really a big deal, it just means I got a little messy when eating it. The onion rings also were great—crispy and no grease at all. I ended up having three Jack’s on the rocks while Justin stuck with his pitcher. These combined with the two meals and an appetizer was $53. To put that into perspective, we had just come from the hotel bar at the Fulton Steamboat Inn and doled out nearly the same amount for four half-assed drinks in tiny glasses loaded with ice and one decent appetizer. I figured that my whiskey pours at Vic’s were around $5.25. This place cannot be beaten for both drink and food value (everything on the menu appeared to be under $10 at a quick glance).

Before we left, we signed a dollar bill to be placed on the ceiling. She asked where we wanted it and tacked it right near our table. There was also a sign on the wall behind us which said, “Please sign the sign”. So we did. There is zero nightlife in Lancaster, especially in the countryside. Vic’s being open until 1 am makes it an optimal hangout when you are done with dinner, or if you are looking for cheap but decent food and a place to relax for a few hours. Do not let the appearance or preconceived notions scare you from giving it a try. Vic’s Wayside Inn is a classic roadhouse and even has a small four or five room motel attached. When I asked if patrons were mostly locals, she responded, “Yes, but since we’re on Route 30, you just never know who is going to stop in.” Be one of those people. 4 out of 5 stars.