The Globe is an old theater built in the 1900’s. It has been renovated but not to the point where you do not know its former use. After all, the dining area is broken up into two spaces: the downstairs where the seats used to be and the actual stage which you have to walk up steps to get to. It’s a neat building which includes a bar that runs along the right side where you first walk in, and a loft that is nearly the full length of the building—that has been turned into a lounge and local art gallery. There is even another side room where a large screen projection plays TCM. It’s charming yet cool, casual but relaxed, and manages to be serious and fun at the same time. Not many restaurants can pull that off when it comes to atmosphere.

We sat up on the stage and started off with a couple of cocktails, creatively named the Orchard Old Fashioned and Marilyn Monroe respectively. They both hit the spot with what we were looking for—mine was a lighter and fruitier take on the bourbon-classic while His contained elderflower liqueur and was light and refreshing. Both were priced at $8.50 if I remember correctly; great prices for the area. The Globe also boasts an extensive craft beer menu for those interested.

Our appetizer was a no-brainer: the fried green tomatoes topped with crab cakes. I dare you to look at that picture and tell me you would not want to scarf that down. Crisply fried green tomatoes were placed over a roasted red pepper tartar sauce and topped with mini crab cakes. Everything about this dish was excellent. The tomatoes had a bit of snap to them and were not greasy at all. The cakes themselves had plenty of whole lumps of crab and very little breading to them. The sauce was creamy. Even the sprinkling of bean sprouts served to add some more crunch and freshness.

For meals, I was torn between the seafood burrito and the seared tuna tacos. I asked the waitress what she preferred and she recommended the latter. I did not want to disagree. She was exceptionally pleasant and did not rush us or push drinks, which is appreciated. So I went with her suggestion, also ordering it the way she gets the tuna, which is rare. This was sushi-grade tuna I was told, and the less amount of cooking the better. It was outstanding. The tuna was fresh, had good flavor without being fishy, and the spinach, mozzarella, and wasabi mayo brought it all together. These were better fish tacos than most Mexican restaurants could serve up. Even the tortilla chips on the side were great (and homemade). Instead of being hard and salty, they were more delicate. It was worth going the extra mile to make them in-house rather than buy them bagged. 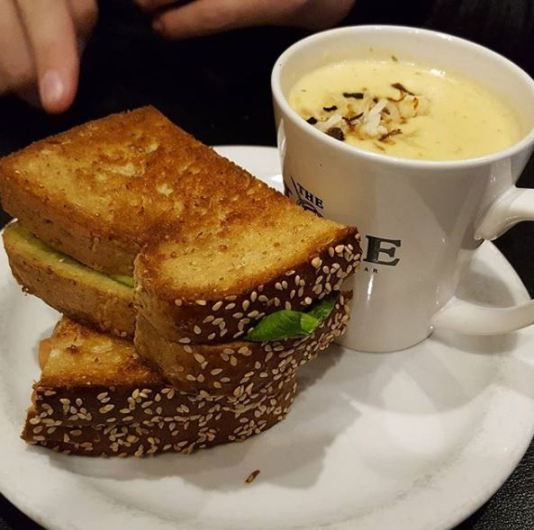 He had a soup and grilled cheese combo. The sandwich itself changes by the day unless you want the house version (cheese, bacon, tomato). His had spinach and a couple of other ingredients that I am wracking my brain to remember. The soup he chose was red-pepper coconut. He loved both. I took a few spoonfuls of the soup and it was delicious. It was like something you would get at a Thai restaurant. Creamy and luscious.

All in all, you cannot do much better than what the Globe did with our meals. And when you think of the range we had: a sandwich, tacos, crab cakes, seared tuna, soup, and cocktails. It was like we had a little bit of everything and they nailed it. This is an unquestionable 4.5 out of 5 stars rating. Our waitress was delightful, and the atmosphere helps to enhance everything just a little bit more. But the food here is center stage (pardon the pun). If I lived nearby, I’d be there every week. Berlin being the “coolest small town in America” starts with their restaurants.

The Globe is located at 12 Broad Street in Berlin, Maryland.