For years, I have heard people speak about Jose Tejas with reverence and awe. They will gush over how good the food is, but not before telling you about how long they waited for a table. Two hours. One hour. “We were lucky! It was only 45 minutes!” I have heard people exclaim. So, when I went there last week, I did not know what to expect. It was a Monday night, after all, just before 7 PM. The parking lot was packed, the cars illuminated under a vintage neon sign that simply says “Eat” with an arrow pointed to the restaurant. Inside, the place was rocking and rolling, but lo and behold, we did not have to wait for a table. I felt like I should have made some kind of sacrifice to the gods for this miraculous event—that the universe had smiled upon us. There were perhaps only three or four empty tables in the massive restaurant as we made our way along the divider separating the bar from the dining room, stacked with hundreds of cases of Corona. Sure enough, by the time we left, there was a line out the door.

Seeing trays of Margaritas go by put me in the mood. This would be my first and only complaint of the evening. I was not a fan. For $6.50, I found the size to be smaller (due to the amount of ice) than what I have had other places, and for cheaper. I guess no one will ever beat Tequila Mockingbird. The taste was fine, though not strong by any means. After a few sips it was gone. Next time I think I will just go with a Corona. Aside from that, I was very happy with the experience. 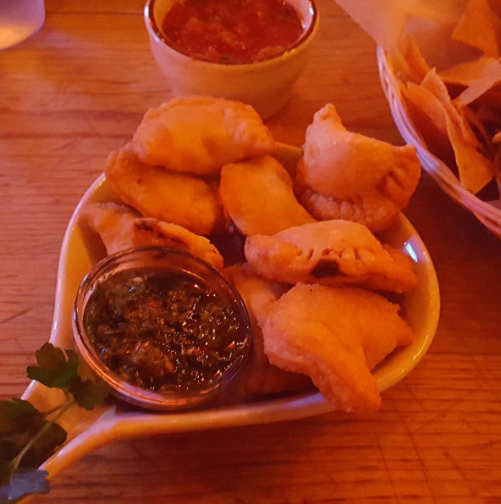 The complimentary tortilla chips were hot when they arrived at the table. Crispy and obviously homemade, but overwhelmingly salty. I needed to dip it in some of the salsa in order to mask it. But man, they were tasty. For appetizers, my friend got a bowl of gumbo and we shared an order of Pastellitos (chicken empanadas). There were eight of them. They were puffy, fried golden brown, and stuffed with a mixture of ground chicken and cilantro, with a dipping sauce on the side reminiscent of a Chimichurri. I enjoyed them, but it was the gumbo that blew me away. The chunks of chicken and sausage were large, and the flavor of the latter was so pronounced that it dominated the dish, but not in a bad way. I’m not sure I’ve ever had gumbo in all my food travels, so this was a nice introduction. But again, holy salt, Batman!

The menu of Jose Tejas is an interesting one. With a Mexican-sounding name, the meals and appetizers are almost evenly split between Mexican and Cajun/Creole. You won’t find that at many other places. Prices were mind-bogglingly cheap. We’re talking $7 for quesadillas, and around $10 for most other entrees, including the Eggplant St. Charles, which he ordered. While on the vegetarian page, this was anything but light fare. Slices of fried eggplant were smothered in a thick layer of cheese and spices. As for me, I went old-school with the chicken fajitas. The portion size was massive. The searing-hot skillet was topped with probably 10 or 15 strips of grilled chicken and tossed with onions. No nasty green bell peppers were present anywhere near this. Then came bowls of rice and beans, and a plate with shredded lettuce and cheese, pico de gallo, and sour cream. For $13, my meal covered half the table.

I’m giving Jose Tejas 3.5 out of 5 stars. Like many other places, I’d be curious to try some of their other dishes because they are on the cusp of a higher rating. For price and portion size, you absolutely cannot go wrong. We happened to luck out regarding the wait-time, so be prepared. But people do not seem to mind. Regulars laugh about it as if it’s just part of the experience. Once you’re seated, though, it’s like a marathon. The food flies out and you’ll probably be done in 45 minutes. Hundreds of customers swinging from the chandeliers is no deterrent to those cooks cranking the food out of that kitchen. The decor is old-school and vintage. Gaslights are lit on columns, while strings of multi-colored lights are strung along the ceiling. It reminded me of a large-scale, indoor version of Taqueria La Ventana in Dallas…only without the skeletons and toilet bowl planters.

Jose Tejas is located at 700 US-1, North in Iselin (Woodbridge), New Jersey.