Bargain hunting? Searching for a hidden gem? This column will profile spirits known as “The Bottom Shelf”. Should you take the chance, or run like hell? Keep on reading and find out!

Why I bought it: At the end of February, one of our local supermarkets that sold liquor went out of business. They had a clearance sale on alcoholic beverages and I saw a 750 ML bottle of this for $8.99. I bought it for that very reason, figuring I would have a cheap mixer and nothing more. (Previously written about here.)

The nose: Mild hints of toffee and caramel, but overall pretty weak. Pleasant, but not quite there.

The taste: Their website puts this at a cross between a Canadian Whiskey and a bourbon. I would say that is pretty accurate. The bourbon notes are there, but the “Canadian” aspects make it a lot more mild and pretty smooth. Die-hard whisky enthusiasts and those who enjoy a good burn will probably be disappointed, but I found myself thoroughly enjoying Henderson. I liked it so much, I headed back the next day to buy the remaining bottles of it…but they were all gone. Luckily, a few weeks later, I found a handle of it at the liquor store. Look, this is not a whiskey that will blow you away. You would not pull out a bottle to impress your friends. Some may label it more on the weaker side, but that lack of bite makes it perfect for easy sipping in a Old Fashioned with some good bitters, quality simple syrup, and cherry. When you think of bottom shelf whiskey, Canadian Club, Seagram’s, Rebel Yell, Old Crow, Heaven Hill, and Fleischmann’s come to mind. Henderson is better than all of them, though perhaps not quite as good as Evan Williams at that price point. 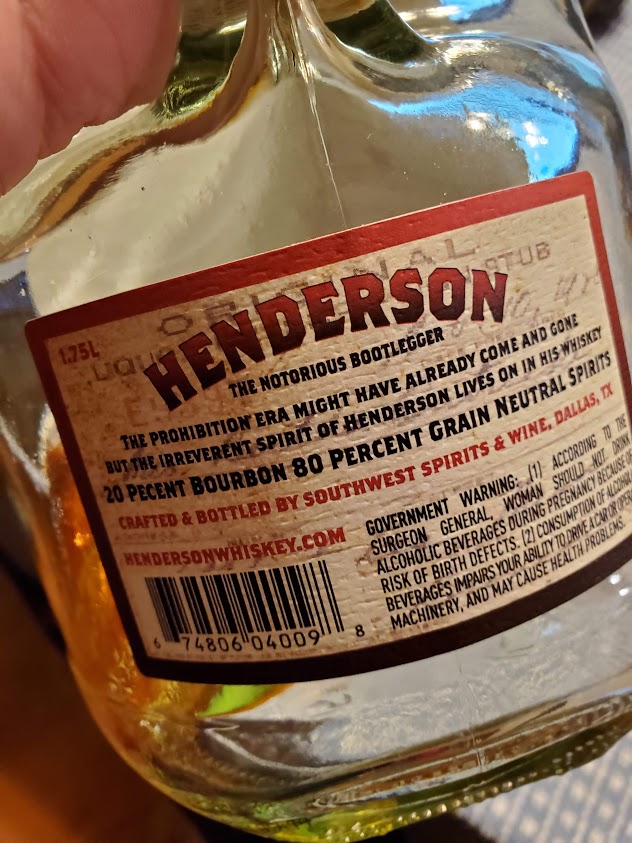 What to use it for: Most people are going to relegate this to mixing with Coca Cola or Ginger Ale, but seriously, give it a try in an Old Fashioned or a Whiskey Sour. I don’t think you will be disappointed. While not quite good enough to sip straight or on the rocks, this could be a good “introductory level” whiskey for someone trying to discover what their tastes are.

Comments: This is all about price. I’ve had whiskeys three times more expensive that were less pleasant than this.