I’ve reviewed a slew of restaurants lately going solely on drinks and apps. Over the years, I have varied which reviews I post with such a sampling. There are some places where I feel that what I had can be representative enough for a review, while others I hold onto and wait for a second visit where more food was ordered. The Red Rock Tap + Grill kind of falls in the middle. We had enough for me to write about, but I feel like there is so much more for me to try here (including an excellent sounding sandwich called “The Piglet” that comes with roasted pork loin, prosciutto paste, broccoli rabe, Provolone, and vodka sauce). However, given the times we are currently living through, who knows when there might be a second visit. So, here we go…

Justin had been here with a friend a couple of months ago. Though also a weeknight, he said the crowd was rocking and remarked more on the vibrancy of the atmosphere than anything else. We normally end up at The Globe across the street, but he had wanted to come to Red Rock with me, and since it was his birthday the next day, used this as a kick-off to his celebration.

There was a decent crowd but the atmosphere was a subdued one. As more businesses close and people choose to stay home, how many more nights like this will we have, albeit temporarily? That’s what I was thinking as I took a sip of my drink. How long before my next review? 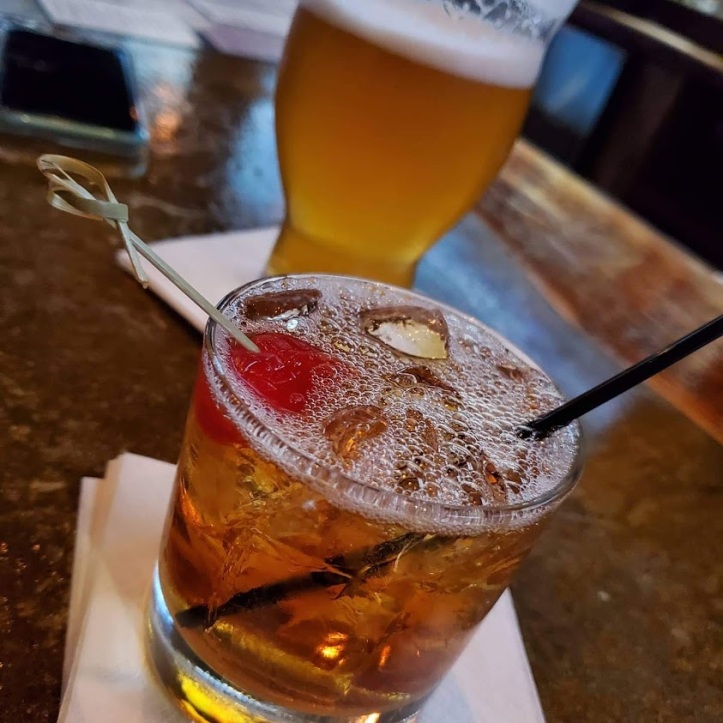 As for what I was drinking, I ordered a Manhattan made with Maker’s Mark. The bartender asked whether I wanted it up or on the rocks. Normally, I always go up, but not wanting to overdo it, ordered this one on the rocks. He did a good job with it, as there was not too much sweet vermouth. Justin started out with a beer (it was their “Beer of the Day”– a heavy-handed IPA) before asking the bartender for a cocktail recommendation. He suggested a Rumrunner, which was two kinds of rum and a bunch of different juices. This was right up Justin’s alley, and he enjoyed it. 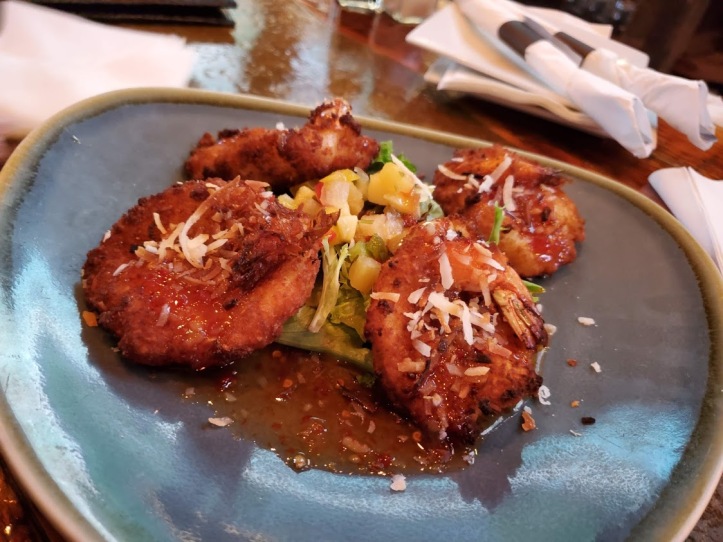 The two appetizers we ordered were the coconut shrimp and the bacon cheeseburger lollipops. The shrimp were actually delicious, cooked to a crisp (though slightly overdone) and placed atop a mango salsa. There was also a drizzle of sweet chili sauce which was really spot-on. The lollipops were essentially risotto rice balls stuffed with ground beef, bacon, and cheese, drizzled with ketchup and mustard, and served with a side of cole slaw and pickles. I did not get much of a bacon flavor, but overall, not a bad dish. This was great bar food, though admittedly difficult to eat as a “lollipop”.

For a first time visit and such a limited sampling, I am going to give a 3.5 out of 5 stars, which I am sure might climb with another try. The bar area is a comfortable setting, the bartenders were knowledgeable, friendly, and made a couple of good drinks. The food, while not blowing us away, was interesting and adequate enough. Prices for all were great, especially for the area. I really want to try “The Piglet” next time.