If I ever had my own bar, my cocktail menu would look like what they offer at Clydz. First of all, I need to thank my friend and coworker Chris C. for this recommendation. We were talking about drinks the other day and he said, “If you like martinis, you need to go to Clydz. They even give you the shaker.” Ah, I reminisced, not many places pour your drink and then leave you with the shaker. You have to go to the big cities for that, or in this case, the college town of New Brunswick. I don’t really even know where to begin with this review. The cocktails themselves, the atmosphere, the service? All were top-notch. So, I guess I’ll start with what we came here for: the martinis. 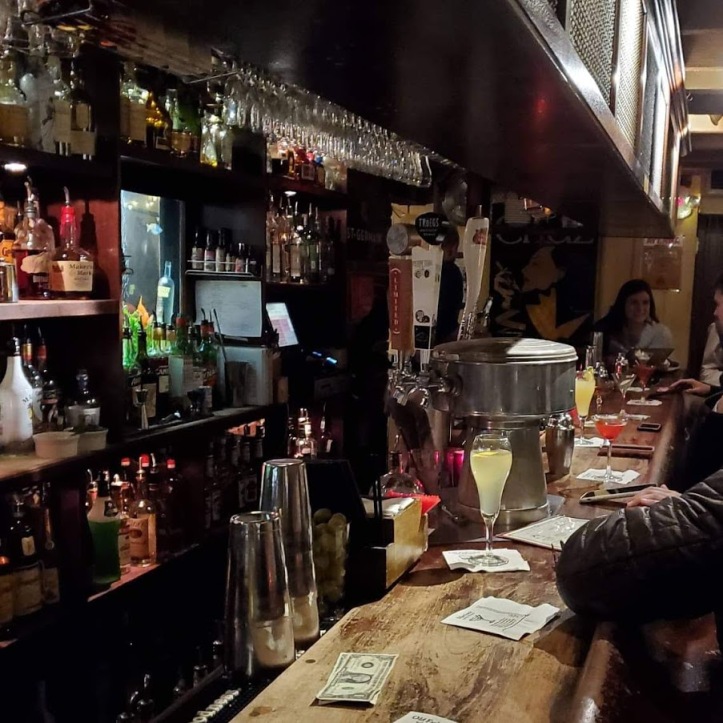 Clydz offers an unbelievable Happy Hour menu with over 50 different kinds of cocktails at a reduced price of $7.50. They include some old-school classics, some new, and some totally unique to their establishment. Their regular drink menu with additional concoctions is essentially a history of the cocktail movement from Prohibition right on through to today. There’s The Last Word, Corpse Reviver, an Aviation, Sloe Gin Fizz, and a Vesper. Some drinks have names that pop right off the menu, such as Bourbon and Cigarettes, Satan’s Whiskers, Cocaine Lady, and Sex in the Hub City. You probably cannot go wrong with any of them.

I ordered the Clydz Classic, which is their take on the gin martini. Rather than dry vermouth and olives, they substitute Lillet and an orange peel. Our bartender was named Eugene, and he was fantastic. He offered recommendations based on what we like (with such an extensive menu, any help is appreciated if you are unsure) and even noted that he would make every gin martini with Lillet if he could because it does not dominate the gin like vermouth does. He was correct in this assessment, as I found myself enjoying this more than any other martini I’ve ever had, either in a restaurant or made by myself at home. This was the martini for me at this point in my life as far as I am concerned. I enjoyed it so much that even as Justin tried three different kinds during our visit and nudged me to differentiate, I stuck with the Clydz Classic over and over again. It was smooth, cold, ever-so-slightly sweet, and citrusy. While I did end up asking for some olives, they were graciously served on the side. Two days later, I found myself in the liquor store buying a bottle of Lillet.

Justin started with a French 55 (vodka, St. Germain, pineapple juice, lemon, and champagne) before moving on to a chocolate martini and then a Decadence (Bailey’s Kahlua, chocolate vodka, Godiva dark and white chocolate) which was as smooth as chocolate milk. Almost every cocktail on their list comes with some form of complexity between the ingredients, garnish, and presentation. My Clydz Classic may have been the easiest out of all of them.

How many times have you ordered something off a bar’s own drink menu and the bartender had no idea what was in it or had to look it up? Well, that was not the case here. This guy knew the menu inside and out. And as Chris advertised, anything served in a martini glass came with the shaker. Since the glass was a cutesy kind of small, the shaker made each drink almost a double.

As is the case almost everywhere we go, Justin and I bring the crowd. When we arrived, we were the only two people there aside from one table in the bar area. Within 20 minutes, a group from Rutgers arrived which filled the house and totaled probably close to 30 people. Eugene was alone for most of the time, handling the massive cocktail-wanting crowd with ease. I did not see a single beer or wine until we were almost ready to leave. Another item of note: at 28, I may have been the oldest person there until a couple in there 60’s arrived just before 7 PM. Normally lost in the abyss of Monmouth County suburbia, this was different and kind of refreshing. No “Old Man Bar” here. Justin’s friend who lives in the area joined us for a round at the tail-end of our visit, and had the Chocolate Martini.

Aside from our drinks, we also ordered to appetizers which were priced at $6 for Happy Hour. This included arancini and vegetable dumplings which we spaced out. Both were delicious, really hitting the spot and keeping us “with it”. Served hot out of the fryer, we needed to wait several minutes before devouring both to give them time to cool off.

Clydz does have a dining area and full food menu, but to do it right is to do what we (and about 30 others did): martinis at the bar and some light appetizers. The ambiance is outstanding. First, you enter down a small flight of stairs below street level. When you walk in, you are greeted with brick walls, a roaring fireplace, a cozy bar, and even fish tanks. This had the look and feel of a Speakeasy—the kind of place that felt cool and secretive until you realize the secret is out.

I give major props to all involved, especially Eugene who was more of a mixologist than simply a bartender. It was so busy at one point that he had four shakers in his hand at the same time and poured mine and Justin’s drinks out simultaneously without spilling a drop. This is a guy not only good at what he does, but enjoying it too. A clear asset to such a business and just downright fun to watch. Even though this was a first-time visit with a limited food sampling, I have no choice but to go with a 4.5 out of 5 stars. Clydz is not so much enjoyable as it is captivating. Part of me is glad that we live so far away, because if I was within walking distance or a reasonable drive to be a regular, I could do some serious damage. For now, this will serve as a treat and getaway for us when we are ever in the New Brunswick-area. Thank you to Clydz for this exhilarating performance.

Clydz is located at 55 Paterson Street in New Brunswick, NJ.