“Peanut Butter Whiskey? What kind of cheap, artificial garbage is that?” I’m not going to lie, but that was exactly what was going through my head when I stumbled upon a small bottle of Skrewball resting on my bar. Justin bought it as a surprise so I could try something new. I was hesitant. Flavored whiskeys are all the rage and have probably reached their apex in the world of spirits. I’ve had a bunch, but aside from one or two, many have a cheap, chemical-induced burn and/or aftertaste. They can be ghastly. I will not mention any brands specifically, but you can probably take a guess which ones. 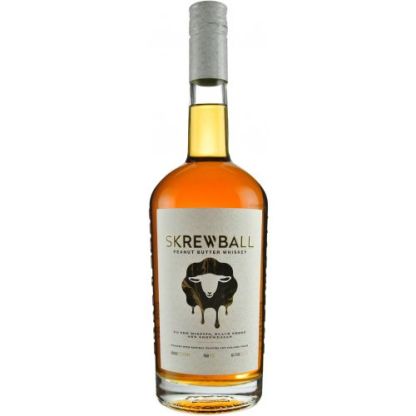 It should then be a complete surprise to all when I found myself thoroughly enjoying this peanut butter whiskey. Having never thought such a combination would work, I opened the bottle to give it a sniff. It was intriguing at first, then after a while became pleasant. My first sip ended up being a perplexing one, because I still did not know what to make of it. But by sips two and three, I said out loud, “This is actually really good. I’m shocked.”

Many flavored whiskeys, or even some cordials in general, do not taste like they smell. You’re excited and then let down. That was not the case here. It smells like peanut butter, and tastes…like peanut butter. Not in a chemically artificial way, but natural. After a few seconds on the palate, the nuttiness lingers almost like a good coffee. When you exhale through the nose, the light and pleasant aroma remains with you. I also appreciate (very much so) that this product is not too sweet. It walks the line between liqueur and actual whiskey. The ABV is slightly lower at 35% (70 proof) but the fact that it is not overwhelmingly sweet and gives you a slight burn as its going down reinforces that this is indeed a whiskey of some kind. Many similar offerings currently on the market fail in that regard. At what point is flavored whisky no longer whiskey? Again, I’m not naming any names.

Skrewball Peanut Butter Whiskey was delightful neat, but I am looking forward to trying it in a cocktail such as a Manhattan. There also has to be some kind of “peanut butter and jelly” cocktail out there, though I am wracking my brain for the combination (Skrewball and Chambord?). I also imagine this going exceptionally well in a chilled Bailey’s shot (a “Nutty Nipple”?) or in coffee. The experiments are endless, and I am looking forward to trying them. Looks like I’ll need another bottle.