It has been a long time since I’ve been to a real Irish pub, not just one in name only. So many places think they can throw an Irish name onto a sign, put corned beef and cabbage and shepherd’s pie on the menu, and be an “Irish Pub”. Well, Dubliner on the Delaware is the real deal. If being smacked with their whiskey selection when you walk in the front door and exposed brick and wooden beams throughout does not get the job done, nothing will. I was actually in this establishment as a small child. Perhaps it was on my first ever visit to New Hope with my parents. Only then, it went by the name of Mother’s. I don’t have many memories of the place except the dining room. I think we were seated at the same table as all those years ago. The shape of the front windows was familiar.

We just had a wonderful evening the night before at our friend’s birthday party. I guess we were not ready to return to New Jersey. We wanted one last meal, which my mom offered to treat us to. We were torn between hitting Ferry Market or giving somewhere new a try. Dubliner it was. There were eight appropriate Irish entrees and a bunch of other goodies on the menu. Not being overly hungry, we all split an order of the curry fries. This was one of those rare instances where a dish can be both amazing and disappointing at the same time. The good: that curry sauce! It was delicious! The bad: why so little of it? Come to think of it, I had curry fries one other time and it was served the same way. Is this how they do it in Ireland? I would have given anything to have ladles of that glorious sauce smothering those hand-cut and genuinely decent fries. We asked the waitress for more sauce but she never brought it over.

For drinks, my mom went with a gin and tonic, Justin had a beer, and I had a beer cocktail which I had not drank since my early drinking days: the Snakebite. This version combined Harp Lager with a hard cider (presumably Magners). It was decent. Prices for all drinks were average for the area, if not slightly below.

Before we even walked in the place, Justin knew he was getting bangers and mash. My mom wanted a burger. But I was torn. The Irish Breakfast was calling my name, but with a car ride ahead, I did not feel like the metric ton of meat and protein that meal entailed. Instead, I too went with the bangers and mash. We ended up both enjoying it—the sausages were snappy and had a little bid of char on the sides. They were place atop creamy and flavorful mashed potatoes. The brown gravy accompaniment brought it all together. It was a satisfactory meal.

As for my mom’s burger, that was a different story. She ordered the mushroom and Swiss burger cooked medium. When it arrived, it was actually still bloody and raw in the middle. As someone who likes his steaks still mooing on the plate, even I couldn’t help but wrinkle my nose and say, “Yeah, you gotta send that back.” And no wonder why, because it was shaped like a baseball. I know a lot of restaurants try to go the gourmet route with this shape of a burger, but I never understood why. It does nothing but increase cooking time, mess with internal temperatures, and make it more difficult to eat as an actual sandwich. We brought it to our server’s attention and she took it away to be put back on the grill. About 10 minutes later, it arrived, barely more cooked than it was the first time around. Points for a solid amount of cheese and toppings, and for a quality brioche roll, but please, flatten those burgers out! 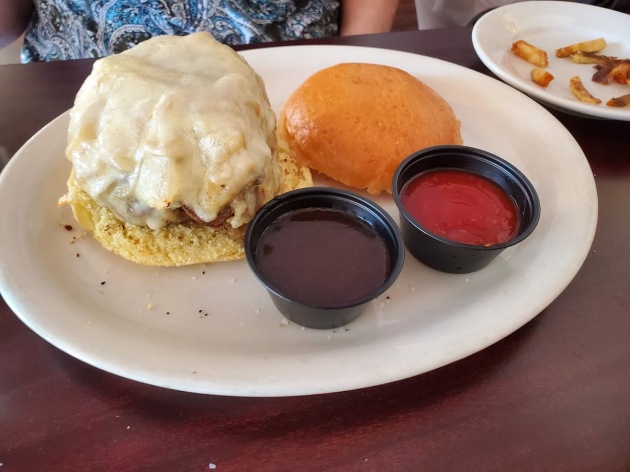 How to feel about Dubliner on the Delaware? Aside from my mom’s burger (which was taken care of without issue), we pretty much enjoyed all that we had. However, there was nothing especially standout out with the exception being that curry sauce. With so many restaurants in New Hope and the surrounding area, I would have to pause before considering coming here again. I appreciate the zero pretentiousness and “homey” factors this pub has, but there is no “Wow!” factor to go along with it. They did a great job in transforming this building to a little piece of Ireland, but the food needs more zing. The rating here will be 3 out of 5 stars. Perhaps if I ever do give them another shot, further exploration of the menu will yield different results. 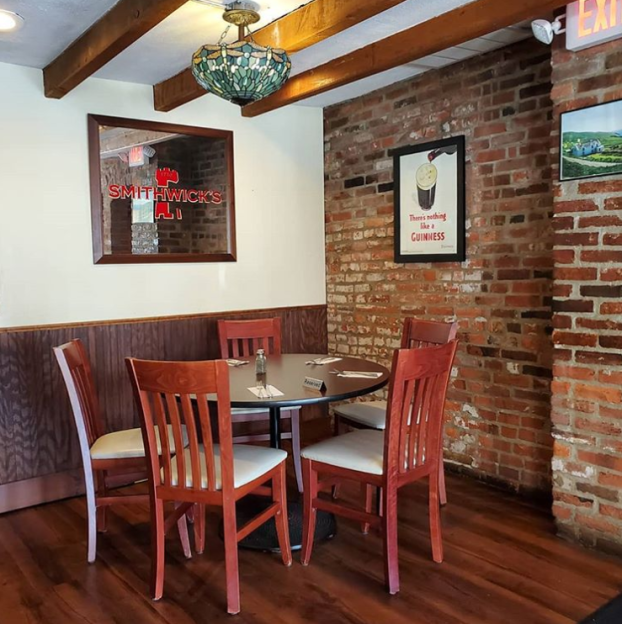 Dubliner on the Delaware is located at 34 North Main Street in New Hope, PA.