I’ve been to the Bird-in-Hand Bakery and Cafe many times over the years. I have seen it evolve from a small bake shop into a mini empire located within a very modern but comfortable building. When you walk in, you are immediately hit with the pleasing aroma of freshly baked breads, pies, pastries, and desserts. On the other side of the building, though, is a place to grab sandwiches and ice cream. In our second morning in Lancaster, we wanted to take a small break from Dienner’s. We usually go there every morning, but we felt deviating away from a heavy buffet to something lighter would be a benefit to our waistlines.

Justin and I decided we would share a pastry ($1.79) along with a breakfast sandwich ($4.29). He chose a cherry Danish, while I ordered a ham, egg, and cheese on a bagel. So much for eating “light”. After placing our order, they gave us a buzzer. We headed upstairs. There is a large eating area next to a quilt shop, and a balcony with three or four tables. It was sunny and warm, so we sat outside. For drinks, we both went with the house special blend coffee. We sipped it while overlooking the countryside as we waited for our food.

The buzzer went off about 10 minutes later. Justin returned with our food. The pastry was delightfully delicate. We ripped it in two and it nearly fell apart. This spoke of its freshness, as it was probably baked earlier that morning. As for the sandwich, it was well-constructed. As someone born in New York and raised in New Jersey, I (and many others) have found it difficult to get a quality bagel outside of that area. This one, of the everything variety, was competent. There was just enough ingredients on it, and the cheese oozed with every bite. The sandwich came accompanied with something that us New Jerseyans have condensed into one word: saltpepperketchup. 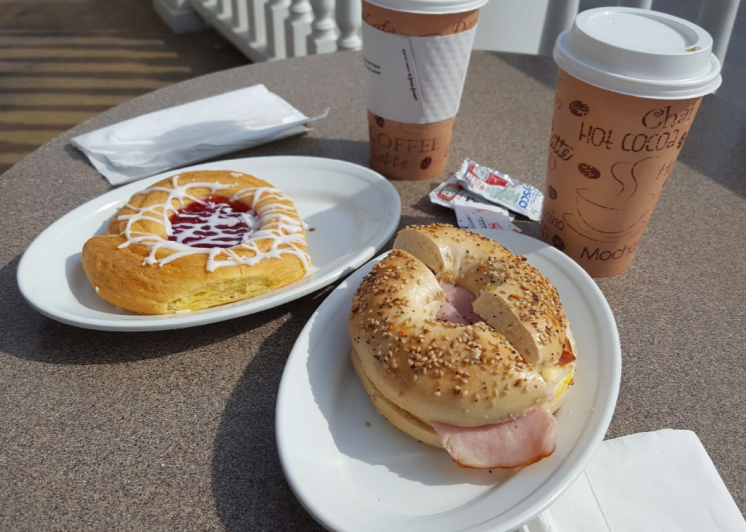 We were overly satisfied with everything we had, especially the coffee. I know most visitors head to the buffets in the morning, ourselves included, but this was a nice change of pace. The Bird-in-Hand Bakery is for tourists, but most just pick something up on their way home. There were not many tables taken from people actually eating in. It is hard to rate a place based on our limited sampling, but I feel 3.5 out of 5 stars is fair, and a pretty good score for a breakfast place. The next day, we returned to grab some sticky buns and a Whoopie Pie before hitting the road. No complaints.

The Bird-in-Hand Bakery and Cafe is located at 2715 Old Philadelphia Pike.