I tend to have a love-hate relationship with high-end breakfast places. Sometimes I find one that I really like, while most often I am left wishing I had just gone to a diner instead. With an overwhelming fan-base, including my own mother, I was not expecting The Buttered Biscuit in Bradley Beach to fall into this category. While I usually approach such places with an air of skepticism, I firmly believed I was going to have an amazing meal here and be writing a positive review. Unfortunately, that will not be the case. After months of telling me I had to visit, it was my mom who treated Justin and I to lunch this past Sunday. Having heard stories of excessively long waits on the weekend, I was pleasantly surprised when we were seated within 15 minutes. It took us more than 30 minutes to get there, so I thought we were off to a good start.

The ambiance and atmosphere of the white-walled Buttered Biscuit is an uppety but sterile one with hints of a Parisian theme. There are chandeliers, those French-themed prints on the walls that you would find in a Marshalls, and a painting of New Orleans’ Cafe Du Monde hanging above the toilet in the bathroom. We were taken to a table in the back corner near the kitchen door. My mom and I had coffees while Justin had an espresso. We glanced through the three-page menu, which is pretty large for a place like this. Seeing that corned beef hash was the house specialty (“So good and I’m not just saying that because my husband is the chef”, the menu reads), I quickly decided I would order that. They had two versions: plain and one with grilled asparagus, Swiss cheese, Hollandaise sauce, and two poached eggs. It sounded like a deluxe take on the classic. My mom would order the same thing, while Justin chose the biscuits with sausage gravy and a side of the home fries with peppers and onions. We made sure that each of us had a biscuit in our meal, because with the restaurant named after one, they had to be good. The three of us would also share a slice of the grilled crumb cake as a mini appetizer. 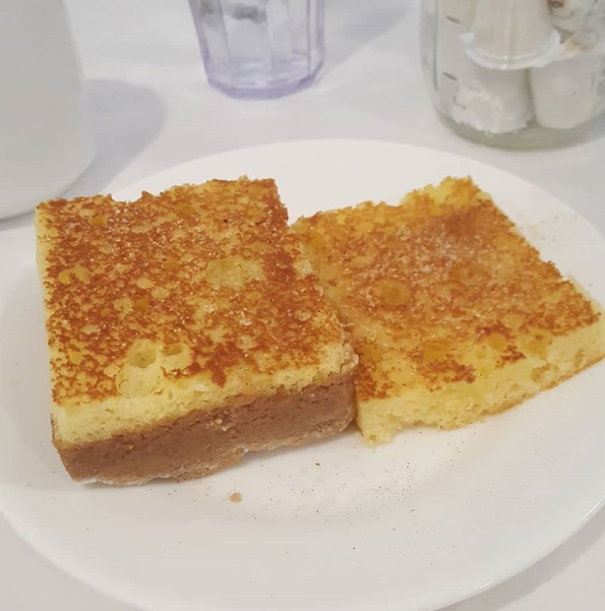 The coffee was fine, and Justin really liked his espresso. The crumb cake was placed on our table. It looked rather uninspiring, kind of like someone accidentally dropped it upside-down into the plate. But I suppose it had to be plated like this to show off the grilled area. It was cold, for starters. I tasted it and found the flavor was just alright. The cake part was delicate and I enjoyed that I could actually taste the butter that was used to grill it. As for the topping, it was not exactly crumbly for a crumb cake. Rather, it acted as a kind of pavement, so packed together that you could have driven a car over it. $3.50 for this little sample was not bad, I just wish the topping was better.

Let’s take a look at some positives of the outing before we get to the entrees. I found the prices to be decent, especially for the area being located so close to Ocean Grove and Asbury Park. Plating and presentation, aside from the crumb cake, was also fine. When my meal arrived, as you will see below, I got very excited because it looked delicious. Service was excellent—our waitress was funny and did not rush us at all. 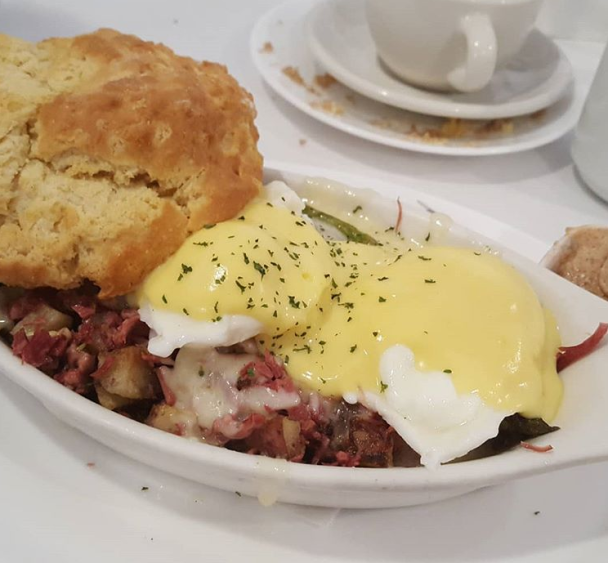 When our corned beef hash meals arrived, I was ready to dig in. This wasn’t some chopped up mess of corned beef, but actual pulled corned beef that had been hashed with some potatoes. I appreciated that. I dug my fork into a poached egg and noticed that the egg was not cooked properly. Rather than hot and runny, it was cold and solid. But that was okay—I figured I would use this as a moment to save some cholesterol and just eat the whites because the Food Gods had deemed it necessary for me to not have a runny yolk. That was the first problem. The second was the corned beef itself: there was the overwhelming flavor of sage. Now, I am not a huge fan of it to begin with. However, even if I am not crazy about an ingredient, if I am at least expecting it to be there I can prepare myself and enjoy it. The fact that this corned beef hash was so loaded with an herb that had no business being there really threw me off. They used so much of it that I could not taste anything else. Halfway through I started dousing what was left in my plate with Tabasco sauce just to do whatever I could to nullify the intense burst of sage hitting me with every bite. Did I finish it? Having drove a half hour for this, you can be damn sure I did. 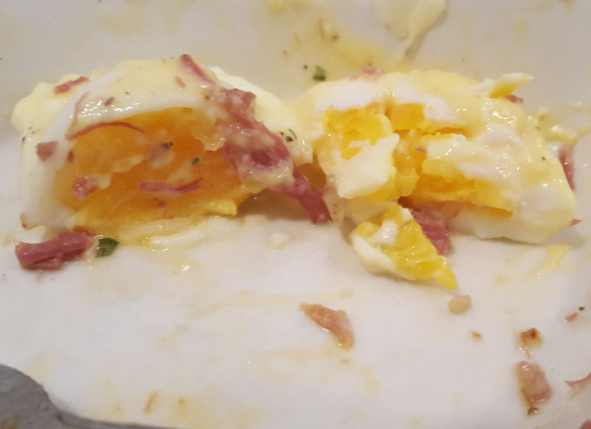 It was about three fork-fulls in that I decided to try the biscuit. “Please save this meal” I said to myself. Or to the biscuit. Expecting a nice hot and flaky biscuit where I could just pop the top off, I was instead greeted by a something more in line with a boat anchor. It was a solid disc—ice-cold, hard, dry, arid, and upon biting into it, tasted like nothing. I found this being the namesake of the restaurant to be astounding. It looked and tasted as if it was baked days ago. We could have played street hockey with it out front. The biscuit did not even come with regular butter. Instead, they gave a little cup of some kind of cinnamon butter and strawberry jam. This was also mind-boggling that The Buttered Biscuit did not actually serve butter with the biscuit. But we asked for some regular butter and the waitress happily brought over a few packets. 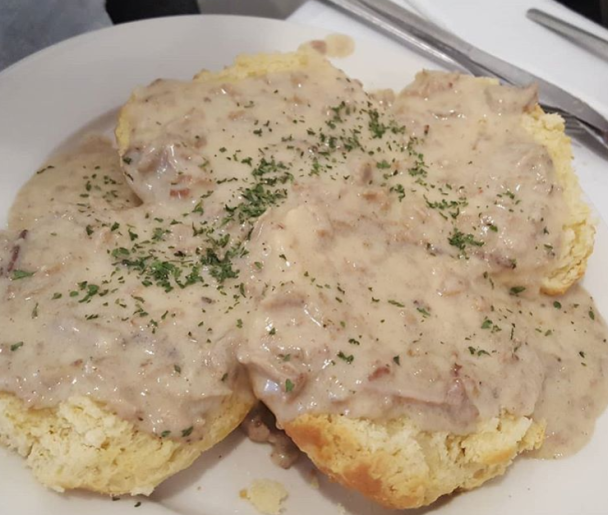 Justin’s meal looked the best, and his biscuits were made better by the fact that they were moistened by the sausage gravy on top of them. I tried some of his and found that I enjoyed the gravy itself, but the biscuits still were flavorless. In a bit of ultimate irony, the sausage gravy contained no sage. Again I wondered how something which usually has sage in it did not, and how my simple corned beef hash could be marred by such an herb. His portion size was massive and he could not finish it. For $7.99, it was the bargain of the day. As for his potatoes, I could not believe my eyes. 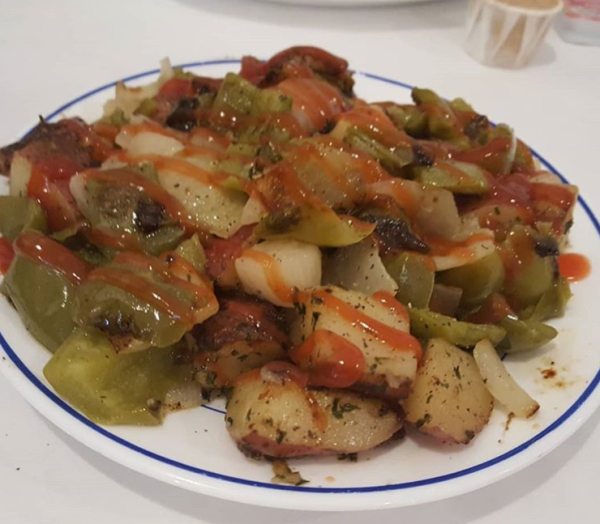 What do you think of when you hear “home fries with peppers and onions”? Maybe the latter two ingredients finely chopped and tossed into the potatoes which are then grilled. Well, when you take a look at the picture (he added the hot sauce), you will see a horrifying, ungodly amount of green peppers. I would have gagged if this was served to me. The potatoes appeared to be roasted, but that did not matter. Who in their right mind would serve something like this? Whole chunks of green peppers! Why? Why? Why?  He did not mind it so much, but I thought it nauseating. I have eaten home fries in more places than I can count and I have never in my life seen it done this way.

What can I take away from The Buttered Biscuit? Well, sheer disappointment to start. I was really expecting something incredible here. Instead, what I got was just another high-end cafe doing things with ingredients which are totally unnecessary and trying to present it as gourmet. I cannot find much in the food which I enjoyed. Hell, if you are a breakfast place which cannot even poach an egg correctly, that says a lot. As for the biscuits which are their namesake, did I get this place on a bad day? Was the chef on vacation? I would think a Sunday at noon would be the optimal time to visit such a restaurant. Based on their reviews and ratings, I was expecting to be walking out of here with a 4 or maybe even higher. However, I am going to have to settle for a 2.5 out of 5 stars. This is only because the sausage gravy was good, the service friendly, and the portion sizes (despite containing sub-par food) more than filling. I would have a hard time giving it a second try.

The Buttered Biscuit is located at 700 Main Street in Bradley Beach, NJ.