Gordon Ramsay’s “24 Hours to Hell and Back” 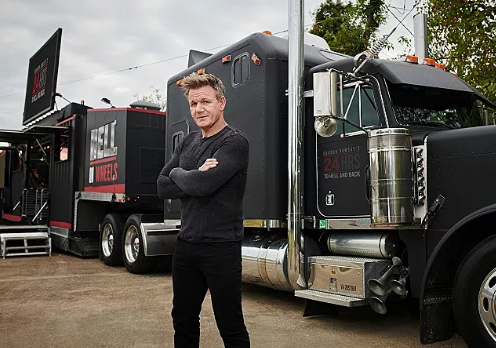 As a fan of Kitchen Nightmares and Gordon Ramsay in general, I was excited to see him returning with a new “restaurant help” show after a nearly four year hiatus. In fact, judging from the commercials, it appeared that this was going to be the same show, just done in a more challenging 24 hours as opposed to the few days or week he used to give himself. While 24 Hours to Hell and Back does have the feel of Kitchen Nightmares, it manages to be too over-the-top for its own good. As if you think Ramsay couldn’t scream or curse any more than he usually does, you are wrong. Only now he has elevated his game by actually throwing a piece of rotten meat at faulty workers and making them eat the same mold-invested nacho cheese that was served to him an hour earlier.

But was that mold incident the real deal or for the camera with a “stand-in” cheese? One would think in this world of liability and lawsuits that had he actually force-fed them cheese with spots of green mold festering and one of them was to get sick or die, that would be the end of Mr. Ramsey and his television empire. That’s the problem with 24 Hours to Hell and Back. No, it’s not the cheese. Hell, I was rooting for him when he made the three stooges running the restaurant have a taste of their own medicine. Privately, some of the cooks and managers of these nightmarish kitchens deserve worse. The problem is that everything in this show is for the camera.

Yes, this is reality TV. Yes, we can expect a fair deal of it to be staged or partially rehearsed. But at least with Kitchen Nightmares, the scenario was more believable. He had a whole week to work with the chefs, clean and remodel the restaurant, work up publicity, etc. We can actually believe some of the outlandish things that happened actually happened because of the general craziness of the restaurant industry. When all of that is condensed into 24 hours, the look is artificial. Ramsay even entered the restaurant in disguise (as a mustachioed police officer) which is going to be a new feature of this new series (in later episodes, we see him dressed up to look like a grandmother). Is that really necessary? And how disguising can it be when a full camera crew was already waiting in the bathroom for him when it was time to get out of the costume and approach the workers for real?

The kitchens are dirtier, the workers and owners more buffoonish. The first part of that statement, I am sure, is not an exaggeration. After years of the old show and Robert Irvine’s Restaurant Impossible, it is hard to believe that more people have not died of foodborne illness. Watching this show makes you want to eat at home for the rest of your life.

Kitchen Nightmares made it seem that helping the restaurant was the true purpose of the show. 24 Hours does nothing but show off Ramsay’s “kitchen on wheels” training truck and a hectic, frenzied atmosphere that even such a project in real life could not produce. It also aims to advance a culinary agenda by turning the first restaurant (the Trolley Stop Cafe in New Orleans) from a diner into a more fine dining establishment. As an around-the-clock location which had become a haven over the years for late night munchies after hitting the bar, Ramsay seemingly erased the breakfast food and burgers and replaced them with a plate of a pork chop and collared greens, and a frittata. The menu was reduced to four items, which according to angry people on social media, still stands. The reason? How many dishes can you teach someone in the course of a few hours?

There was a lot I liked about this show and I will give it another shot next week. Ramsey’s softer side is shown, as he shares a private moment with the kitchen manager over their difficult younger years and how they overcame them. However, everything else seems to outweigh it. I know the target audience has no patience, but the pacing was too frantic even for them.

There is no restaurant development in 24 Hours to Hell and Back, only drama. There is no working with the kitchen team on a new menu, just five minutes of screen-time where Ramsey shows the kitchen manager a new dish and then yells at him moments later when he cannot replicate it. That’s not how teaching works. There are no bonding exercises and extensive forums where the workers voice their opinions in detail, only a minuscule denigration of the coddled millennial owner, by his employees, who has no idea what he is doing early on in the show. There are plenty of people who see Ramsey as a bully over a chef, and an episode like this does nothing to quell such a sentiment. 24 hours is the point of the show, but it hurts more than it helps.