We wanted to end our three-day excursion throughout New York, New Jersey, and Pennsylvania last month on a good note with a good breakfast. We were staying in Bethlehem and I did a quick search for the nearest diner. Right up the road was the Hanover Eatery. I walked in and was immediately reminded of Lancaster. I don’t know what it was. The design was not overly country. Actually, it was more like country colors with modern fixtures and artwork. I’ve had some amazing meals at diners/family restaurants like this. I’ve also had some dreadful ones. How would this one pan out?

I’m never one to eat meat at breakfast but there was my beloved scrapple on the menu. It practically called my name. So I went with the “Hanover Breakfast Feast” which consisted of two eggs, two pancakes, homefries, a meat of my choosing (scrapple), coffee, and juice. All of this for $7.95. Justin, meanwhile, ordered a special which was the stuffed pumpkin pancakes. These were filled with vanilla cream cheese. He also asked for chocolate chips to be added.

Our server was extremely friendly but seemed a little off. She forgot that my meal came with juice and upon bringing the food, forgot my pancakes. Not that I needed the pancakes with the feast in front of me. I dug in so quickly that I did not take my customary Instagram picture and only have this half-hearted effort below to show for it after I already started eating. Apparently my meal also came with toast. The eggs were perfectly cooked—nice and runny. The yolk was everywhere as I scarfed down the homefries and toast while waiting for the pancakes. I was stuffed by the time they came. I was only able to eat one. It was fluffy. My only complaint was the scrapple. It was a large portion but a little too mushy. If the slice was a bit thinner and crispier, it would have been a homerun meal. 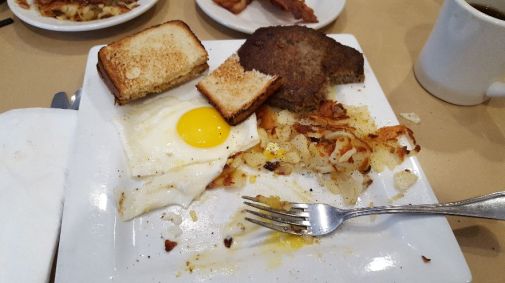 As for Justin, he began to sweat after just one pancake. They were delightful. Just the right amount of pumpkin spice. The vanilla cream cheese (speckled with those chocolate chips) tasted like a cross between marscarpone and canoli cream. Quite a remarkable feat for this homey looking diner. He was thankful he got the short stack of two, because three of those would have put him into a food coma. He too had a side of homefries and toast. Carbs! Carbs! Carbs!

The bill was cheap, the atmosphere warm, and the food filling. We left more than satisfied. The exclamation point on our trip. If only we could have walked around instead of getting in the car for a 90 minute drive. It would have been much-needed. I would like to try this place for lunch or dinner next time. Hanover Eatery gets 3.5 out of 5 stars and with a solid lunch or dinner would probably climb higher.

This restaurant is located at 5090 Bath Pike in Bethlehem, PA.