The Eldorado Diner was located across the street from our hotel. It was also the final stop for some food after our bar-hopping adventures in Tarrytown and Sleepy Hollow earlier that night. No longer in New Jersey, it was nice seeing a 24-hour diner…with a bar. We already had enough to drink, but their cocktail prices weren’t bad. Anyway, with stomachs full of corn fritters and jalapeno poppers, we still did not quite have enough fattening food. First up? A basket of onion rings.

The rings were a little thinner that what you would normally see, but they were certainly crispy enough. They hit the spot and helped soak up the remaining booze. I bit into each one with feelings of self-loathing and questions running through my mind like, “Why are you doing this?” If that wasn’t bad enough, I ordered a burger in the form of a patty melt. 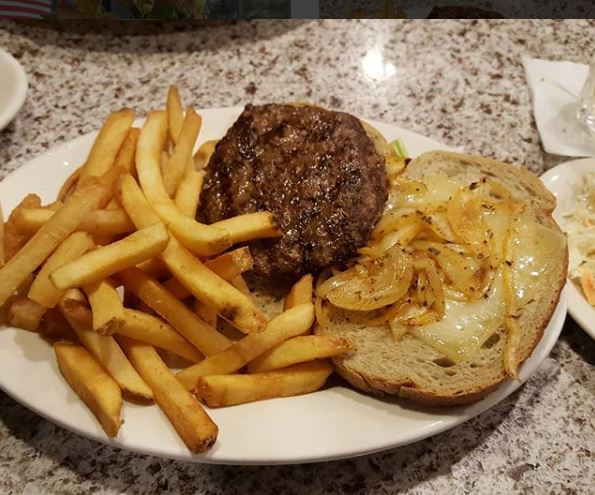 Oddly enough, I enjoyed it and disliked it immensely at the same time. The first couple of bites sent me into a peaceful nostalgia. The bread was quality. The fries were well-done. But the burger patty itself had been cooked into oblivion. It was like biting into a hockey puck. This was mind-boggling when you consider the waiter himself asked if I wanted medium before I could even request it myself. As for the customary onions, they were dusted, of course, with my favorite herb of all-time: oregano. After a few bites, it was all I tasted. I stopped halfway.

Justin too had a burger. He actually enjoys his cooked ala hockey puck, but that could not save his meal. The burger was flavorless. Worse than that was the Disco Fries he ordered. No friends, we’re not in Jersey anymore. They had to be ordered as “fries with cheese and gravy”. The portion size was ample, but the gravy had a weird consistency and taste to it. Actually, it was kind of slimy. I gave it a try and thought it was just plain average. Disco Fries for people who’ve never had real Disco Fries.

All in all, I didn’t hate the Eldorado Diner. The food was kind of blah but it wasn’t horrible either. For almost one in the morning, this place served its purpose. I think that is the best way to put it. I will give them a 2.5 out of 5 stars. Maybe their breakfasts are better than the rest of their food.

The Eldorado Diner is located at 55 West Main Street in Elmsford, NY.