Our third bar visit of the day was thankfully the best one. Third time’s a charm, as they say. Since the first two were so disastrous, we debated even giving this place a chance at all. The goal was to come here for late night drinks and maybe a snack, before heading to a 24-hour diner across the street from our hotel for actual dinner. When we walked into The Huddle, I actually took a step back. There was no one in the place. No customers. No bartender. No servers. Totally empty. With the lights and televisions on, we stepped inside. After taking a seat, the bartender appeared. I ordered a gin and tonic while Justin had a pitcher of Bud Light to himself. He originally ordered a bottle of Budweiser, but the bartender informed him a bottle is $5 while a whole pitcher of the lighter stuff was $8. He ended up getting five pints out of it.

My G & T was passable. At least I could taste some gin. The small size was $6 and I eventually moved on to a larger one (in a pint glass) a round later. That was only $8. This bar is another example of how knowing what to order will save you some money. As first-timers, it was through trial and error. We placed an order for an appetizer, the jalapeno poppers. With that, the bartender disappeared. He was gone for 10 minutes. He emerged with our poppers in tow. I inquired if he did the cooking as well and he said that on Monday nights he was the only employee in the joint. This was not a problem because we were literally the only people there until three more came in an hour later, but what if there was a rush? How can one person be expected to bartend and cook, and in totally different areas of the restaurant? What if I wanted something more extensive than a fried appetizer? Sounds like he was being left out to dry by management.

Anyway, the poppers were delicious. It was evident they were homemade and not frozen because they were all different sizes. There was also a wad of flaming hot cheese inside which could scald your mouth if you did not bite down carefully (I learned the hard way). As we continued to drink and munch, I noticed a bottle of Johnnie Walker Blue Label on the bar. These sell for around $180 and usually fetch a minimum of $50 for a pour. Justin wanted to make a bet with me about the price. I said it would be $60 while he, not knowing much about Scotch, said it would be far lower. He called the bartender over and asked how much a shot of Blue was. The bartender responded that it would be $8.

I was astounded and nearly fell off the stool. I even questioned him, asking if he was sure. He said they only charge $7 for Black Label and that Blue was a dollar more. He left to attend to something else and Justin prompted me to get it, because he could tell how shocked I was. I said, “He’s either wrong, it’s a computer error, or that’s not really Blue inside that bottle” and “He must be confused between Red and Black”. Well, Justin ordered one up for me and it arrived. It was indeed Blue Label. He won the bet.

We continued to talk about this astonishing discovery. But there was something amiss. The bartender came over and said, “Actually, the price is only $7.” He walked away again. As I debated what I was going to order next (which was not really a debate), we asked how much a neat pour would be, or even just a shot poured into a rocks glass. That’s when it got a little strange. The bartender said, “It’s $35 for a shot. I was just doing you guys a solid.” There was something wrong with this: 1) Why would he do us this favor? 2) How could he blatantly screw his employers over like that, and while on camera? It seemed more to us that he made a mistake and tried to cover up for it by saying he was “doing us a solid” and “hooking us up with the good stuff”. While their loss is our gain and I was the opposite of mad, it left us both feeling that this place is in disarray. Management will leave him and, in turn, the cash register alone so he can go cook in the back and also have someone so untrained that he literally cost them money. And by the way, the Blue was on the bill for $6.

I don’t want it to seem like I’m bashing the guy. He was very nice, talked with us just enough, and actually cranked out a couple of nice appetizers. But he needs some help. We ended up with one more snack, which was the corn fritters. These too were perfectly crispy and stuffed with sweet and white corn. Served with chipotle mayo, they were a shining example of what drinking food should be. 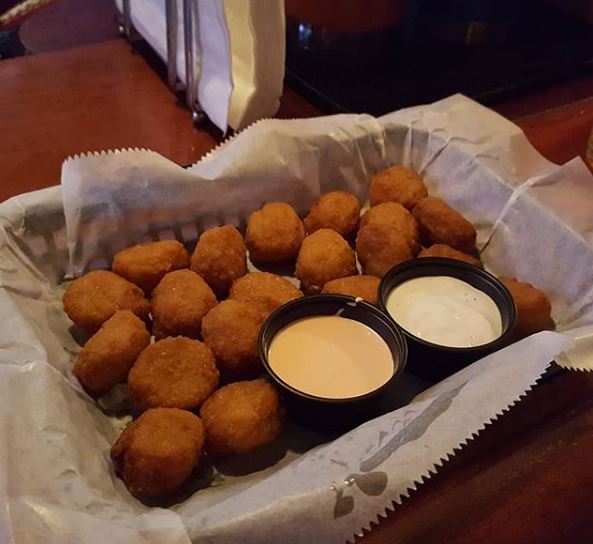 The only thing that rubbed us the wrong way was the shot of Jager that Justin ordered. Though it was on tap and advertised as chilled, it was piss-warm. It was also served in a plastic medicine cup, not a shot glass. I have no idea why it was done this way. The price for this royal screw was $6…and a sour taste in our mouths to end what was otherwise a fun experience. It also knocks the final score down to 3 out of 5 stars.

The Huddle is located at 92 Beekman Avenue in Sleepy Hollow, NY.