Our first restaurant on this recent three-day trip was located right across the Hudson River in Tarrytown, NY. We had walked around a few minutes looking for a place to grab lunch before exploring Sleepy Hollow, the reason for our trip there. It didn’t take much thinking after looking into this charming Greek restaurant that appears to have been in business forever. Lefteris Gyro has a cute dining room with those blue checkered table cloths you would expect to find. It had a certain nostalgia to it that only a New York eatery could provide. The workers there appeared to be all family. The owner greeted us on the way in and then we were sat by our always-smiling and kind waitress. We noticed there were outside tables as well. Though located right on a busy street, they were hidden away by planters. It was a romantic spot, perfect for a first date if you are looking for such a location. 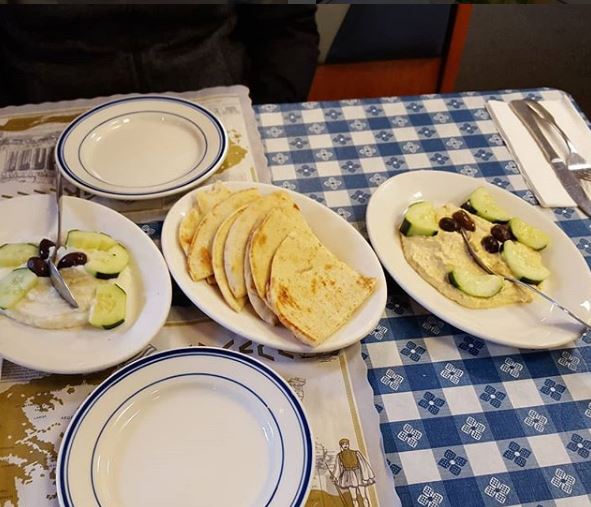 We started out with a couple of appetizers. In hindsight, had we known how large our meals would be, we probably would have ordered only one. It was hard to not go with the ubiquitous hummus. I also wanted to try something that I had not eaten in a long time which is Skordalia, a cold mashed potato, olive oil, and garlic mixture. These were served up with a plate of warm, grilled pita bread. As we neared the end of the bread, our waitress came over and asked if we wanted more. We of course said yes. It arrived along with our meals. 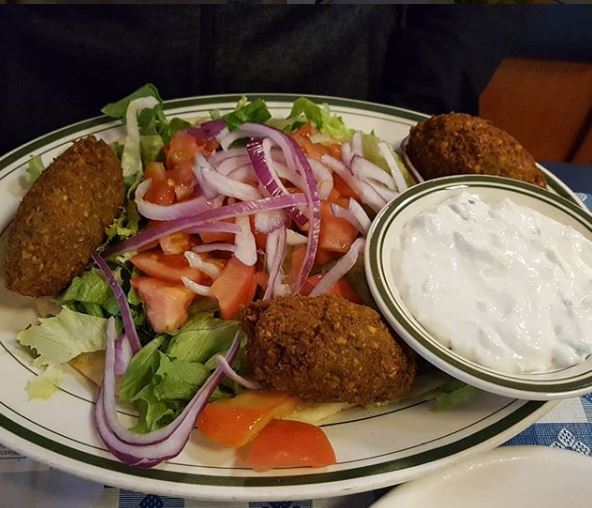 Justin had gotten the falafel platter. He had three croquette-like pieces presented on a massive pita wrap with lettuce, tomato, and onion. There was a side of ultra-creamy tzatziki sauce just waiting to be dipped in. He enjoyed what he had. The falafel was crispy on the outside but light and airy on the interior. I had gotten the gyro, the authentic version with lamb. You cannot tell from the picture because of all the lettuce, but there was a massive amount of meat stuffed inside of that. I actually did not finish it—I ended up eating the lamb out of the pita with a fork at the end because I was so full. It was sliced thin and was tender and juicy. I snagged some of Justin’s tzatzki sauce even though mine already had some in the wrap. 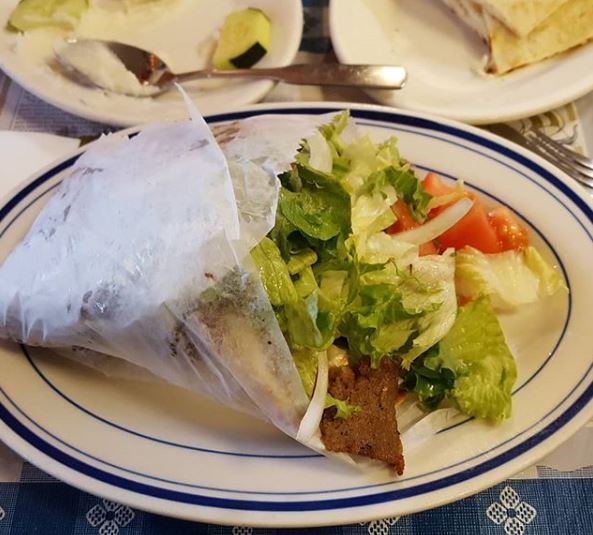 Come to think of it, neither of us finished the food. Combined with the appetizers, this was a feast. The hummus and skordalia came in at $6.95 each while ours were both $8.95. The service here was fantastic. She refilled our drinks without any prompting and was always smiling. She looked like she truly enjoyed her job, which is always a plus. I can’t see us coming out this way ever again, but if we did, I would love to return to Lefteris. There’s a whole world of entrees on their menu that need exploring. This was a great restaurant to begin our trip with. 4 out of 5 stars.

Lefteris Gyro is located at 1 Broadway in Tarrytown, NY.

Leave a Reply to Reviews of The Tapp and Set Back Inn (Tarrytown, NY) – Eating New Jersey Cancel reply