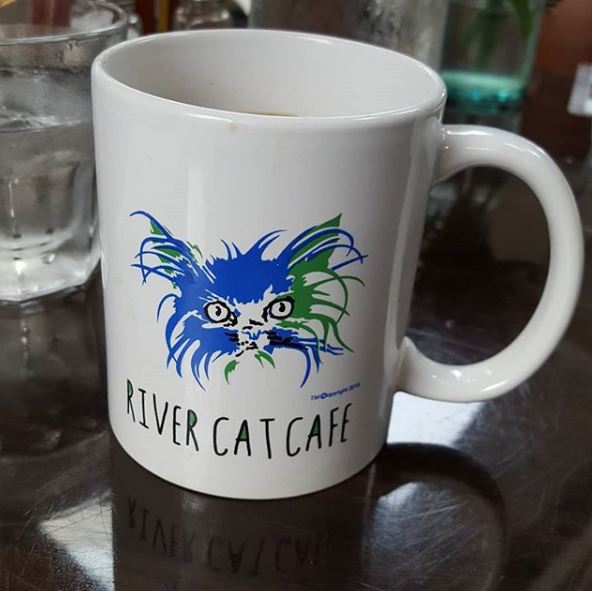 It is with joy that I can type this review of New Hope’s newest restaurant and not have to note it was overpriced and aimed toward trendy hipsters. Instead, we finally have a place where you can grab an affordable breakfast or lunch in a town where trying to get a meal for two people under $50 can be a daunting task. My friend Walter, a frequent character here on Eating New Jersey recommended this restaurant to me. He knows one of the owners. I told him that next time we were in town, Justin and I would make it a point to eat here. The time came two days ago. The River Cat Cafe is a breath of fresh air into New Hope’s environment. The logo is cute. In fact, if I had to pick one word to describe the place as a whole, it would be that.

The inside is pretty open. There are tall ceilings with skylights and a large seating area that is not broken up. When you first walk in, there is a counter displaying pastries and baked goods. You can also come in and order something to go without having to sit and eat. We were about to go for a walk at the nearby Bowman’s Wildlife Preserve. For that reason, we wanted something filling yet did not want to be stuffed. We chose to share an order of chocolate chip pancakes as well as the chicken cordon bleu panini, which was a special that day.

Waiting for the food gave me a chance to look around. Through the back windows, there is a slight view of the river. It would have been really something if this place was located just a little closer. The people eating lunch on this quiet Tuesday were a mix of families, senior citizens, and a few people around my age. It is always good to see a mix.

It is also worth noting that coffee is self-serve. You can get up and walk to a station. They also have more flavors beside just regular and decaf, including Jamaican Me Crazy and Salted Caramel. I went with the former, and thought it was delicious. It would go great with the pancakes.

Speaking of those flapjacks, I got excited when they hit the table because you could tell they would be fluffy—they just had the look. Biting into it erased any shred of doubt. It was like eating pillows stuffed with chocolate chips. The pancakes were light and airy, meaning an addition of butter and syrup was not going to make them too heavy. We both loved these, and I would probably get an order to myself next time. As for the panini, it was pretty good. The chicken was a medium-sized breast and grilled. It was topped with ham and Swiss cheese, and pressed. My only complaint is that I wish it was just a little bit bigger. The sourdough bread used (we were given a choice) was just not big enough for the contents. Compared with the pancakes, it was run of the mill. The sandwich was served with a kale salad.

I don’t really have any other complaints. It would have been nice to see fries on the menu to accompany sandwiches (although my gut was thankful for the kale). There were also quite a few bugs flying around including a bee and what looked like a wasp that came too close for comfort next to our table. Maybe they can be a little more mindful of the door opening to the outside seating. The River Cat Cafe is going to be a recommended breakfast/lunch dining option for the sheer reason that you get a good bang for your buck. The pancakes were $10 and the sandwich was $9. Nothing wrong with that. I am going to give them a 3.5 out of 5 stars and say I’ll definitely be back.