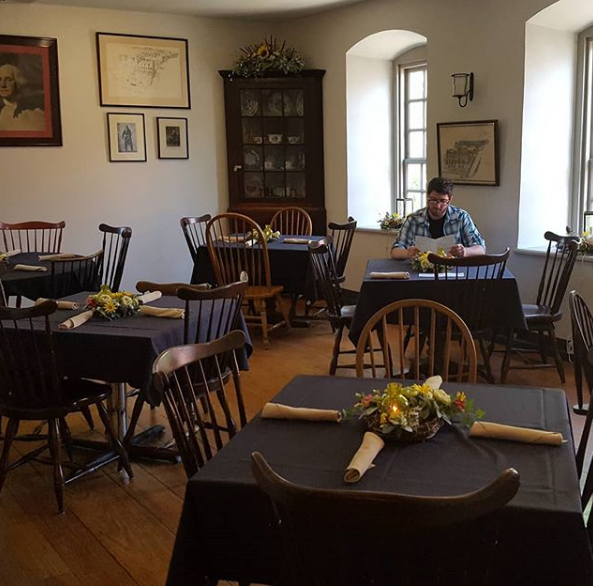 When Justin and I arrived on a Monday and walked around Bethlehem, we were immediately drawn to the Sun Inn. The building was erected in 1758 and currently serves as a full service restaurant, distillery, and museum. My being a history lover made this a must-visit. However, we had to wait until Wednesday (our last day of the trip) because they are closed on Mondays and Tuesdays. We arrived for an early lunch, around 11:30 AM before hitting the road back home. We walked in and were taken aback by the Inn’s charm and atmosphere. The first floor has three museum-style rooms which were decorated and furnished according to the time period and roped off. We were then seated upstairs, which was a nice feature, because it felt like we were exploring this old house.

Since it was so early, we happened to be the only table in the place for the majority of our experience. The server we had was named Zach, and he was friendly, attentive, and knowledgeable. He asked if we had been there before and when we said we had not, explained the menu to us. Since we had a lot of driving ahead of us, I had to forgo ordering one of their many unique, colonial-inspired cocktails. Their drinks featured “shrubs”, which is a centuries-old way of preserving fresh fruit in vinegar. Our waiter noted that the Sun Inn tries to be as historically accurate as they can, with a modern twist. However, the “Fish House Punch”, which includes rum, peach brandy, cognac, tea, and lemon juice is George Washington’s own recipe. I then mentioned that I work at a museum myself and appreciated what they were doing, both with historic preservation (the building was a model of how restoration and maintenance should go) and the restaurant. He spoke a little more about their recipes before offering Justin and I each a sample of their Goundie Soup. We obliged. 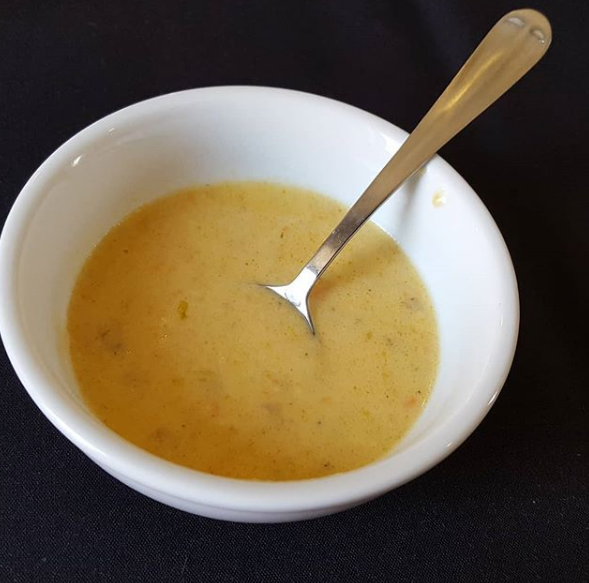 At this time, we put in an order for an appetizer which was the Innkeeper’s Meal. It consisted of brie cheese, homemade bread, homemade pickles, dried fruit, and grain mustard. For meals, Justin had the Ben Burger which was actually a black bean burger with arugula, shaved red onion, and a mustard aioli. I then ordered the Caldwell Brat, which was a locally sourced Breakaway Farms chicken brat and the somewhat odd combination of lemon, tarragon, shallot jam, goat cheese, strawberries, and a balsamic glaze.

The soup arrived first. This was melted muenster and cheddar cheeses along with the Sun Inn’s own ale. It was rich and creamy. The flavor of the beer really shone through. As a whole, it was actually quite bitter (due to the beer) which is a flavor profile that helps set up your palate before a meal. I am glad we got to try some of this. The sample size hit the spot. A whole bowl would have been too filling.

As for the appetizer, we both enjoyed it. There were two nice wedges of brie and four large cuts of their homemade bread. The pickles were tiny and sliced paper-thin. The highlight of the board was the grain mustard. It was so overly creamy and flavorful. The grains were delicate and not overpowering (I saved the rest for my brat). I only have two complaints: the first is the dried fruit. It was unnecessary and tasted store-bought, like the kind you would find in packaged Hawaiian trail mix. Considering the board contained homemade everything, it was a bit of a downer. Secondly, it would have been nice if the cheese was warmed, but it was not a big deal. We made due spreading it on the bread. 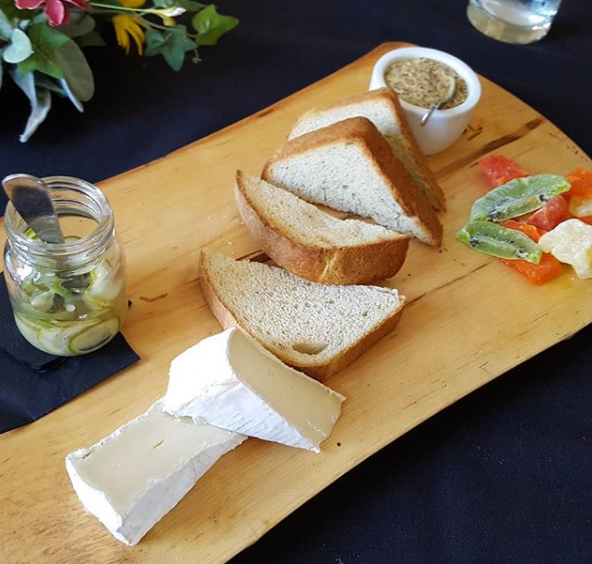 Our meals were a mixture of excitement and pondering. I knew exactly what I ordered and that it was a bit odd, but it needed to arrive for me to fully grasp a chicken bratwurst being put on a bun with strawberries and balsamic vinegar. The brat itself was perfectly cooked. It could not have been any crispier on the outside, and the inside was burning hot and juicy. I did not taste any lemon, tarragon, or shallot jam whatsoever. The goat cheese ended working surprisingly well in this context, and the balsamic added some additional sweetness. But the strawberries were unnecessary as they were not exactly ripe and did not add anything. The bun was toasted perfectly making this an enjoyable sandwich but just not as good as I was expecting.

Justin’s burger itself was also excellent. He enjoyed it and I did as well after taking a bite. It was clearly homemade and fresh. But he complained about the shaved onions on top being so potent that they overshadowed the taste of the burger. He felt the same as me: it was good but should have been better. Both came with homemade potato chips which were outstanding. 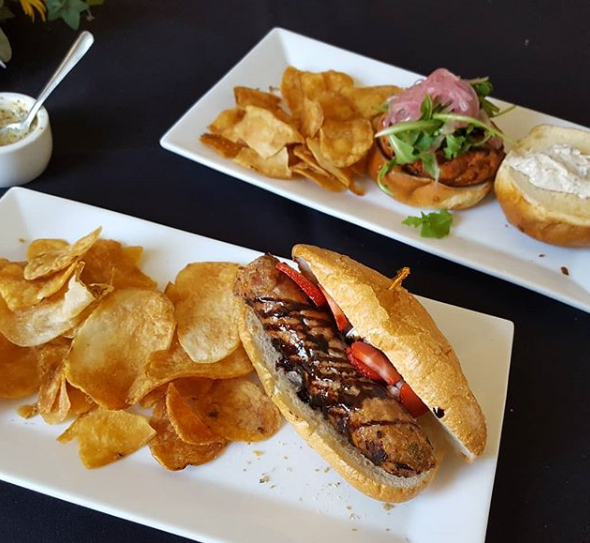 For a colonial inn, the prices were not bad. Our sandwiches were $12 and $13 respectively, while the appetizer was $10. Drink prices were not bad either, but I only went with a seltzer with lemon (which they did not charge for). I am having a hard time coming up with a rating. The food by itself would be a 3—little more than average overall. Then I have to factor in the unbeatable atmosphere and charm, and also the friendliness and attentiveness of our waiter. I guess I will give them 3.5 out of 5 stars because there are so many variables. The building is beautiful and the setting just adds that much to the experience.

The Tavern at the Sun Inn is located at 564 Main Street in Bethlehem, PA.