On every vacation I have ever taken, no matter how great the overall experience was, I manage to find one dud of a restaurant. On our four-day sojourn through Pennsylvania, we wanted to have a touch of culture. I am a passionate consumer of Indian cuisine. Justin is newly getting into it, and after a visit to Neelam and a couple of other dabbles here and there, he calls himself a fan. While doing a restaurant search in the Bethlehem area, Nawab Indian Restaurant came up. It had decent reviews. We actually decided the night before that we would eat here on our last night in town. As we relaxed in the hotel room getting ready for a night out, a Nightmare on Elm Street marathon played. Yet little did we know the real horror show was about to begin.

We walked into Nawab and I was taken aback by the color. It was pink. Not in a subdued way, but hot pink. The kind of color you would see jumping out at you from the girls’ toy section at a Target. Because we were excited and had only been there a few minutes, I thought the atmosphere was dated yet mildly authentic. By the end of the evening, it was tacky, gross, and unclean. After all, we had a lot of time on our hands to sit and stare.

Justin and I were sat without menus. I believe it was the owner who brought us to our table—one of only two visible employees in the establishment. I thought he was going to come back with menus but he never did. Instead, he focused his energy on straightening out a tablecloth and fixing silverware. When I finally got his attention, I asked for menus and he apologized. They were brought over to us. Justin and I would go on to each order a Lassi (his strawberry, mine plain sweet). For food, we started with the vegetarian platter consisting of samosas, vegetable pakora, paneer pakora, and some other little pocket of fried dough stuffed with something. Our entrees were chicken makhni and tandoori shrimp. For bread, we could not go wrong with plain naan and an onion naan/kulcha.

20 minutes passed by and there was nothing except our two drinks, which were both warm. While the flavor was there, if I am having a sour yogurt-based drink, it should be cold. But I overlooked it because it is really a minor detail in the grand scheme of things. When food finally arrived after a third of an hour, it was the chicken makhni and one basket of plain naan. No appetizer. Nothing. In fact, the waiter, when he sat them down, made no mention of anything except to say, “Your appetizer is coming right now”. Putting aside the fact that he had just placed our entrée before the appetizer without even so much as an apology or explanation, the appetizer and the rest of the food would not come for another 17 minutes. Yes, I counted. Yes, I was mad. No. Enraged. I never get angry at restaurants, but something about the nonchalant arrogance of these two nitwits set me off.

The owner was still aimlessly meandering about. He filled a water here, fixed a napkin there. He was rearranging the deck chairs on the Titanic as the minutes ticked on and on. I refused to eat the makhni or the bread until the rest arrived. If it got cold by then, I was going to send it back. It somehow managed to hold the heat. The owner kept looking at our table as he walked by. Maybe he was puzzled. Maybe he was staring off into the oblivion which he arrived from that projected him into a profession that he had no business being in. In either case, he chose to saunter around with his thumb up his ass rather than go into the kitchen and say, “Why is their entrée sitting there for 17 minutes and the rest of the food including their appetizer is still not done?” It would have been better for them to just take a really long time and bring everything in one shot than do what they did. 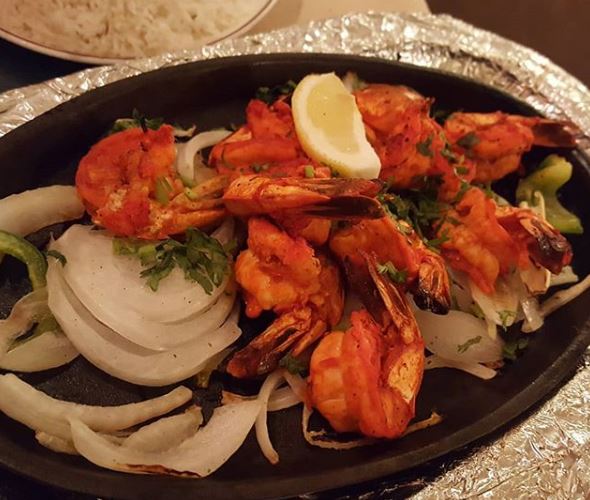 Finally, the moment came. The shrimp, onion naan, veggie appetizer, and basmati rice arrived all at once. Where do I even begin with this assessment? Justin grabbed at the shrimp first and said that it was cold. I picked one up too and it was. I still ate one and it was chewy, the least of our problems. We called the waiter over and asked if they could heat it up. He responded with, “It needs more heat?” and when I responded yes, he said “Okay” and proceeded to walk away from the table without the shrimp in question. Five minutes later, the captain of the vessel walked by and I called him over too. I said the same thing and he responded in the quietest, most clueless voice, “Oh…it’s cold? Sure, I’ll heat it.” He grabbed the dish and walked away. We didn’t see those shrimp for 15 more minutes. Time check? We’re up to 52 minutes and still we are not complete.

When they finally arrived back at our table, they were no hotter than when they departed. What did he do, stick them under a heat lamp? We ate one more shrimp each and by this time the color had turned into a weird translucence, the consistency into shoe leather, and the flavor into what could best be described as “funky”. We refused to eat any more. I am just grateful that I didn’t end up with food poisoning in this God-forsaken patch of restaurant hell.

On to the rest of the food, the cubes of chicken in the makhni were also tough. The sauce was hot and quite flavorful—I enjoyed it—but that chicken was clearly pre-cooked at an earlier time and heated up in the sauce. No way it was made to order. As for the portion size, there were maybe 10 tiny cubes of it. The rice was fine, but cold. The vegetarian appetizer which was all deep-fried was about as average as Indian food could get. Thankfully, it was not greasy but it did not pop with any flavor. Both breads were dry and arid, and also flavorless.

Look at the pictures and they will reveal a decent-looking food. But underneath that was a real bomb. Regarding my heat lamp comment from earlier, Justin raised a good point. He mentioned how at no time did we ever hear the clanking of pots and pans in the back or see anyone in the kitchen moving around (he was seated facing that way). It brought up the idea that perhaps all of their foods were just sitting in a steam table in the back. Maybe the shrimp was done in the tandoori oven that afternoon. Same for the chicken. The waiter, when he disappeared for moments on end, may have been stirring said chicken into a pre-made sauce. Indian food is difficult cuisine and based on my experience, usually done with love. I would hate to think this restaurant was half-assing it that much, but I’d certainly believe it. How else could food hitting our table “as it was being finished” be cold. There is only one answer and it isn’t pleasant.

The owner came to clear our dishes and I mentioned the shrimp again. I said that it was still cold, tough, and inedible, and kindly asked for it to be removed from the bill. He had a glazed, almost dumbfounded expression and simply said, “Okay”. That was the face of someone who didn’t care: not about his customers, not about the quality of his product, not about his business. The passion was gone, and it showed. They couldn’t handle a moderately busy Tuesday night and did not seem the least bit concerned about it.

But there’s more. I went to use the bathroom and when I got back (expecting to see the bill), Justin said we had to pay up front. I was confused. No bill was given to us despite every other table receiving their check at the table and either paying at the table or up front. So we walked over to the register where we stood another 10 minutes before the waiter finally came over to ring us up. I will have you know that for the first time in my life I contemplated not leaving a tip at all. They did not deserve another cent from me, even with the shrimp removed. But I conceded to my conscience and left a nominal, well-deserved amount.

This was an exercise in how to not run a restaurant. The people at Nawab (all two of them) are not fit to operate a roadside hot dog stand, much less be a purveyor of such an exotic cuisine. I give them a 1.5 out of 5 stars. The makhni sauce was the only thing that prevented this fiasco from becoming the first 0 I have ever given in this blog’s history. I have had bad experiences, sure, but never have I literally seethed with anger during a dinner. I feel bad if the people of Bethlehem think this is good Indian food. Such a nice town deserves much more than this masked pig slop.