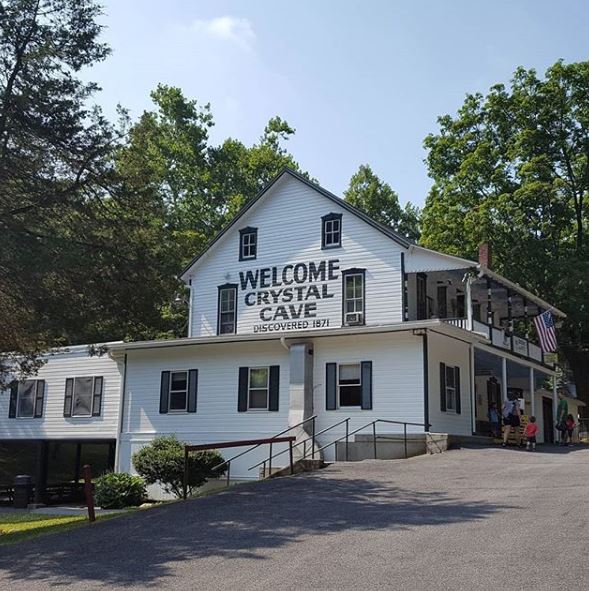 This entire story is the result of happenstance. Right place, right time. Fate…if you will. The one thing Justin really wanted to do on this vacation was take me to Crystal Cave. He enjoyed it so much on his previous visit years ago, that he said we had to go. I actually altered my hotel plans to make sure we would stay somewhere near enough to get there early in the day. We arrived at around 10 AM. We headed into the gift shop to buy tickets and the man at the register said that one tour was just about to start. If we hurried, we may miss a minute of the intro video. If we wanted to wait, the next tour was only in a half hour, but had a large school or camp group on it. With that said, we made a mad, exasperating dash up a small mountain where the cave entrance is. We caught the video right on time.

After a 15 minute showing, they bring you into the cave. It is well-lit so you can take in all of the natural beauty. There are scientific mini-lectures on stalagmites and stalactites mixed with enough humor and corny jokes to make it fun enough for all ages of visitors. The time in the cave is only about 40 minutes. We made it to the deepest chamber and that is when they tell everyone not to move. They then shut the lights off for around 30 seconds to give you the experience of total darkness. When the lights turned back on, they flickered slightly. A woman next to me nervously said under her breath, “Are those lights flickering?” Before I could answer her, they were off. Total darkness again, this time for the duration of the tour. 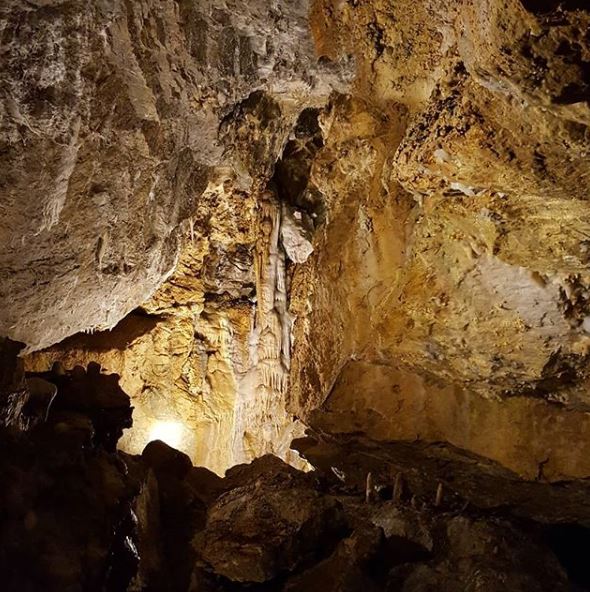 At first, people thought it was a joke. Another tour in front of us was on their way out. We thought maybe they pulled a prank. But nope, it was dead. There was nervous laughter from the group, but the guide (who was working his last day at the cave) kept on trucking. He continued the tour. After all, we had to go that way anyway to leave. Since this is 2018 and everyone has a flashlight on their phone, it was far from dangerous. But I imagine a different result if this was 10 or 15 years ago. It might have made the news.

Other employees rushed in as we were leaving to make sure everyone was alright and to assist older visitors. One remarked that we were the first group of people to tour the cave in such conditions since it was discovered over a hundred years ago. As we hit daylight, we saw a massive backup awaiting the cave. There must have been 200 kids on the property with their counselors and teachers. There weren’t going to be any tours for a while. As fate would have it, we got there at the right time and picked the right tour.

On a totally unrelated note, there was another catastrophe brewing. We made it back to the parking lot. I noticed a bus heading straight for a low-hanging power line. I stopped Justin from advancing, and we stood and watched this bus driver get a live wire hooked on the back of the bus as he tried to drive under. A female employee came running over screaming, telling him to back up so it would unhook. He did, and no progress was made. A minute later, a male employee also ran over screaming, saying he should go forward. At this point, the dingbat, mouth-breathing driver must have said, “Screw it!” because he gunned the bus forward and took not only the power line with him, but the entire unit the wire was attached to on the side of Rock and Mineral Shop.

The wire and the wooden panel it was attached to were ripped right off the building and dragged through the parking lot. At this point, employees were running towards the bus like a cavalry charge. All hollering, everyone in disbelief. Again, right place, right time. We stood there amused and dumbfounded. And they say people-watching isn’t a worthy activity? Someone lost their job that afternoon! I could only imagine if tours could not resume, the thousands of dollars Crystal Cave was robbed of that day. This vacation was barely a full 24 hours old and it was far from boring.