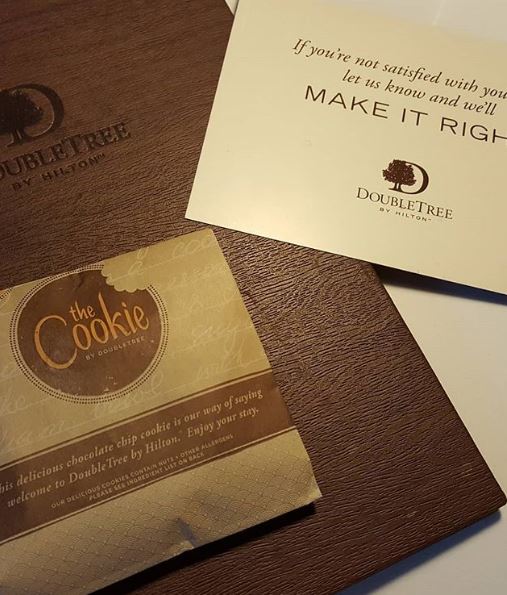 Justin and I were only in Reading for one day and one night. We arrived late in the afternoon after antiquing in Adamstown with a mandatory stop at Renninger’s. We picked up some books and another piece of hardware for my bar. The traffic was horrendous, so we stopped at only one more shop before heading straight to the Reading Pagoda. After that, it was time to check in at the Double Tree located right by Santander Arena. This was the highlight of our existence in this town.

I haven’t stayed at a Double Tree I haven’t liked. They start you off with warm chocolate chip cookies and there is always quality coffee on standby in the lobby. The hotel itself is massive, classy, and clean. For a place with extremely reasonable rates, it felt upscale. The employees were all quite friendly. Then there was our experience at their restaurant, Cheer’s American Bistro, which may be the best on any Hilton property I’ve been to. There was even a piano outside the hotel with a mini library above it. After a rocking night at Cheer’s several people were out there having a good time.

Our hotel room was sizable and appeared to be newly renovated. We were on the sixth floor. When we arrived, the room I had checked into online was still not ready, but the person at the front desk immediately switched us to one that was so we did not have to wait. Finally, Justin and I went for a swim later that night after grabbing drinks. The pool was open until midnight, and the gym 24 hours. Very convenient. The pool also stood out. They had a nice arrangement of tables and chairs as well as the restaurant menu on the walls next to a phone in case you wanted to dine poolside.

I don’t know what would ever bring us to Reading again. We stayed here out of necessity: wanting some place in the middle of Adamstown and Kutztown to make morning travel easier. But this hotel was par excellence and I would absolutely come back. I don’t rate hotels on this blog, but they would easily get 5 out of 5 stars. The next morning, we hit the gym at 6:30, grabbed some coffee in the lobby, and got ready to move on to Crystal Cave, which is the next installment of this Travel PA series.