I had never realized the sheer numbers the Hispanic population represents in Reading. There was one restaurant after another. It was hard to decide which one to check out. Being in town on a Sunday helped, as many of the dining establishments we had our eye on were closed. We felt like something cultural, and a quick online search turned up the Sofrito Gastropub. It is located right in the middle of a residential neighborhood. Blink and you’ll miss it. You’d have to be looking for it to find it.

The inside was kind of grungy but fun. There was a nice wrap-around bar when you first enter, and that room opens up into the dining area. We grabbed a table right in front of an enormous chalkboard listing their craft beers. The bartender was also our waitress (and from what I observed, seemed to be either the owner or manager). She was super-friendly saying right off the bat how we could sample any beer we wanted before ordering a pint. I  blindly went for the Sobel Honey Blossom, while Justin sampled two and got the Lot #3 IPA. Mine was delicious—maybe the sweetest beer I’ve ever had. The flavor was easy on the palate and it went down incredibly easy, almost like nectar. 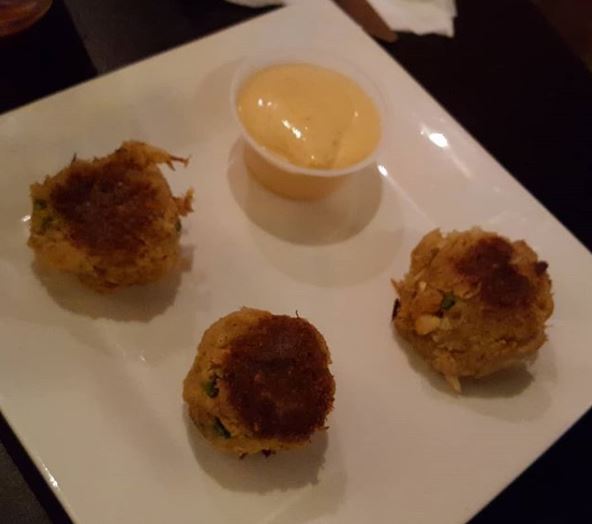 The waitress was also up front about some ingredients they had run out of including yucca and mofongo, among a few others. They must have had a busy weekend. For an appetizer, we ordered the jalapeno crab balls. I can’t say I was impressed when they arrived, being that it was $9 for three tiny balls, but the flavor was there. The crab was not imitation and the peppers gave it a slight spice. The spicy cheese sauce on the side was killer. Due to the size of the entrees to come, the small crab balls were a blessing in disguise.

Meal prices were more than fair. My Pernil Asado was $12. Justin’s lemon chicken was $13. These came with sides of rice and beans, fried sweet plaintains (maduras), and an additional salad. The choices were the house salad, Caesar, or a kicked up “Chipotle Caesar”. We both went with that. The dressing was not remarkable—merely a smokey Caesar salad. The lettuce was not cold, which was odd.

Before our entrees came, we put in another beer order. Justin got a bottle of Budweiser and I had a pint of a peach wheat ale whose name eludes me. Dinner hit the table. My portion was massive. The section of pulled pork in the photograph does not do it justice. I feel like I kept eating and eating and eating. It was fall-apart tender, loaded with flavor, and even more popping when mixed with the rice and beans. I had no complaints. Zero. It was Justin’s where we encountered a major problem.

He cut into his chicken breast to reveal that it was completely raw on the inside. This ultra-thick cutlet was too big for its own good. The waitress came over, saw it, and apologized profusely. She took it away as well as the silverware. 10 minutes later a new plate (and thinner chicken) arrived. She said they threw it out and made a new one from scratch, and then said that she would buy his first beer for the inconvenience. The problem was rectified smoothly here, and the raw chicken will not affect the overall score of this review. If only more businesses reacted with such grace.

We left here absolutely stuffed. The amount of food Sofrito gives you, combined with price makes this a hard place not to like. The waitress was knowledgeable about every beer and dish on the menu. The food quality was up there with other Hispanic food I’ve had. The atmosphere was quirky, but I enjoyed it. I am going to give Sofrito a 3.5 out of 5 stars.

Sofrito Gastropub is located at 220 Douglass Street in Reading, PA.