Hear ye, hear ye, all those on diets, stay away from Amy’s! This place is named the “Omelette House” for a reason: there are 222 of them to choose from. You open up to the front pages of the menu and you are blitzed and inundated with options. The array is dizzying. How can any mere mortal decide on just one from over two hundred? While they have it nicely broken down into categories, I must be forgiven if I stared at those pages for about 15 minutes. There’s a section for “usuals”, one for seafood-based, another based on favorites from certain states, another from countries. Then there is a selection just for Mexican-themed, “healthy” choices, and finally, some gut-busters where your omelette is placed atop a deep-fried potato pancake…or two.

I’m not an omelette guy. Hell, I’m not all that much into breakfast in general. Give me a bagel or some pancakes. However, for the sake of reviewing an “Omelette House”, I needed to get an omelette. How could I judge such a place based on a ham melt? Justin did get a burger, but that ended up being just fine because it gave me a chance to catch a glimpse of the “other” portion of the menu. After you are done with the whirlpool of egg choices, there is still two more pages of additional breakfast items and four more pages of sandwiches, burgers, clubs, wraps, salads, cheesesteaks, and some dinners including steaks, meatloaf, and fish. This is a diner on steroids. My only hope was that it lived up to its image. 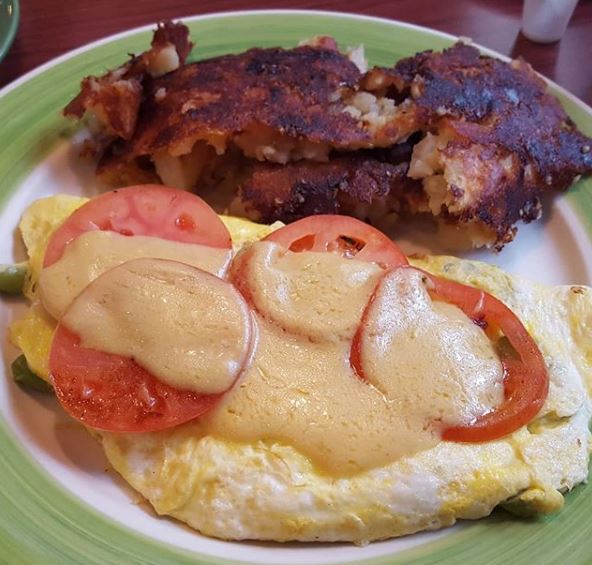 Of all the possibilities, I settled on the #101 named the “Asparagus Delight”. This was stuffed with asparagus, tomato, cheddar cheese, and topped with Hollandaise sauce. All  omelettes came with a side of home fries and toast. I was ready to dig in by the time it had arrived. Justin and I had just finished burning some calories on Sandy Hook and were starving. The portion was sizable. The omelette took up over half the plate. It was stuffed with diced asparagus and tomatoes, and topped with four more tomato slices. There was just enough Hollandaise to let you know it was there, without ever making it too heavy or drippy. The egg texture was light and fluffy. The cheese inside was adequately melted and oozed out with every fork-full.  As full as I was by meal’s completion, I never became stuffed or uncomfortable. Quite an accomplishment for a diner to pull off with such big plates. Food like this can become overbearing quite easily.

The homefries on the side are also worth their own paragraph. I asked for well-done, and they delivered. They were as crispy as I have had anywhere—not underdone underneath the crispy-looking part, but handedly well-done. It lacked seasoning, which was a small downer, but I added some salt and pepper and it was good to go. The toast they gave was also notable: thick slices, lightly toasted, and served dry with a side of butter packets.

Justin’s burger was called the “Mountain”. It came with slices of Canadian bacon, diced fried onions, cheddar cheese, and barbecue sauce (which he got on the side). The burger was cooked to the level he asked, and this became an enjoyably sloppy sandwich for him. There was plenty of all toppings, and he was relegated to eating his second half with a knife and fork. The menu did not note that it came with onion rings and fries, but there they were. Also quite crispy.

I have to ask why Amy’s is not open until ultra late? This is drunk food done to perfection. Well, maybe I should change how I say that: this is excellent diner food which would serve as good drunk food. I am going to give them 3.5 out of 5 stars. Friendly and attentive service, enormous food portions, quality to match quantity, and a unique menu that is hard to match anywhere else.

Amy’s is located at 444 Ocean Boulevard in Long Branch, NJ.