So This is Pittstown 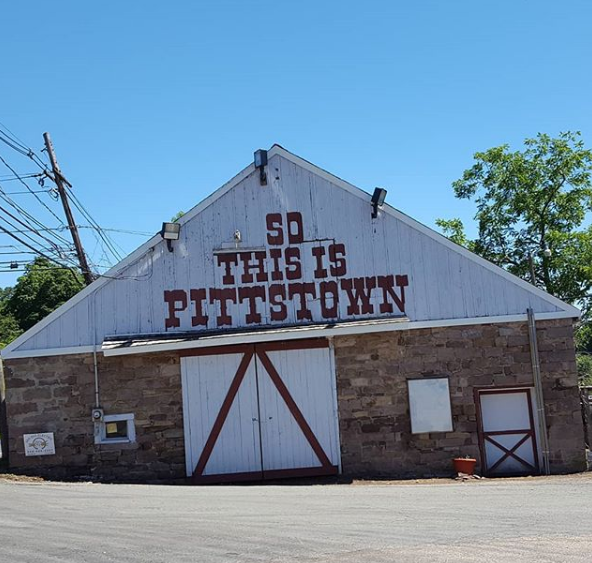 There’s a barn from the 1800’s that has a saying on its roof that reads, “So This is Pittstown”. I passed by it several times before deciding to actually pull over and take a picture of it yesterday. I had long felt that such words were put up by locals for the world to see out of a sense of bemusement and self-deprecation that they live in a location named Pittstown. Or maybe it is because Pittstown seems to be in the middle of nowhere. Apparently, years ago, there used to be another sign posted to the barn door that read, “R U Lost?” and underneath that a map so you could figure out where the hell you were. After all, what would actually bring someone to Pittstown?

I must admit, it is not quite a destination for me either. I have only been traveling through. Either en route to Frenchtown, heading back home, or taking a scenic drive to New Hope or Lambertville. The town boasts quite a few old or historic structures and is picturesque. Just yesterday though, I did some exploring, albeit not extensively. On our way to Frenchtown, Justin and I were in the mood for a jolt that only a caffeinated beverage could bring. As I was making a turn on what would put us on the last road before our destination, I noticed an old building with a tiny sign advertising coffee. We turned back. As we entered the parking lot, there was another small sign with the name of the establishment: Brew 362. This was probably the most historic building that a coffee shop would ever be located in. I later asked one of the owners just how old it was, and he said from the 1730’s. 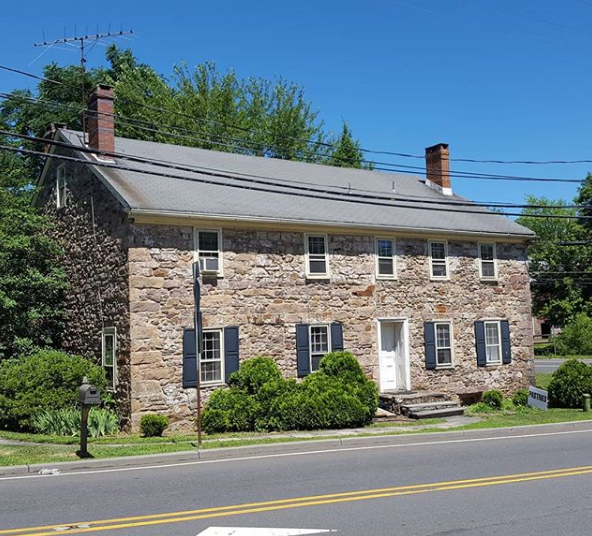 Inside is beautiful. I did some digging online and it appears Brew 362 opened just last year. They managed a modern renovation yet still kept the historic character. Bravo. When you first walk in, you are greeted by a counter, menu board, and display case. They offer more than just pastries and sweets, but sandwiches and actual food as well. The menu noted a roast beef and horseradish sandwich, while Justin saw a meat pie offering. We were going to be having lunch in Frenchtown, but still ordered a small pastry stuffed with cinnamon apple to share. He had an iced macchiato while I had a hot black dark roast.

While waiting for the coffee, I wandered around. There were two rooms I noticed: the first had a couch and some comfy chairs by a fireplace while the other had tables and chairs. There was a man on a laptop at one, and an older couple sipping coffee at another. The coffee was ready and since it was so nice out, we went outside to the front patio where there were several other tables and umbrellas. The pastry, which they warmed, was delicious. My coffee too was good—strong but not too rough or bitter. Meanwhile, Justin, who paints himself as a coffee aficionado, loved his macchiato and said he wished he got the larger size because it was so good. With that, we headed out on our journey. But Brew 362 left us with quite an impression. It comes up out of nowhere in a town in the middle of nowhere. Totally unexpected. The people here know what they are doing. The decor is minimalist, but the place is new and it is really not much of a big deal. Aside from that, it is a homerun. If I had to give them a rating, I would say 3.5 out of 5 stars based on this very limited sampling. A suggestion I do have is getting a larger sign for their business. They are barely noticeable as an old house in a countryside speckled with a plethora of old houses.

We drove around a few more minutes just to see what else was in Pittstown. There is, of course, the historic Pittstown Inn which was built in the 1760’s and was actually used by one of its owners to supply George Washington’s army as he was Deputy Quartermaster General. I would like to eat there one day.

There did not appear to be much else to see. A building right near Brew 362 seemed to be a butcher, pizzeria, and ice cream shop all in one. I later read that there is an airport nearby and a restaurant called the Sky Cafe where you can eat lunch while watching planes take off. If the occasion arises, I would not mind checking that out either. This is by no means an exhaustive appraisal of what Pittstown has to offer, but I will say it is a delightful village with enough history and charm that it is worth at least stopping by, even if it is only for a cup of coffee. This is a place that does not seem like it is in New Jersey. It is tucked away, almost hidden, just waiting to be found. So that was Pittstown.