You’re off to a good start when once again you’re the only white guy in the restaurant. Perth Amboy strikes me as one of the last bastions of the Jersey Coast where ethnic and cultural centers have not been overtaken by the bearded hipster in flannel. Such a sight would have caused me to run away screaming. I actually know the city quite well, or so I thought. Having worked there for four years at the Proprietary House Museum, the area surrounding Smith Street became familiar. However, it had been a long time since I ventured farther down past where Portuguese Manor is. Justin promised me a Latin American food adventure to an authentic spot. My request was, “Take me to a place where no one speaks English”. I asked him do the ordering so I could take it all in. He ordered in Spanish.

The only input I gave whatsoever is that I did not want the grilled chicken. This is something I can eat anywhere. I wanted something different. I also added that this place reminded me of several Filipino restaurants I had been to, where you walk down the line and point at what you want. For someone like me who did not recognize much, this is the perfect way to present the food. A menu, regardless of whether it was in Spanish, English, or bilingual, would have been useless to me. I need to see it. Justin asked me if I liked goat. I responded in the affirmative. From that point on, there was a certain energy and excitement in the air. As if to say, “It’s on!” He ordered one thing after another…after another. I was rather spellbound. I glanced around seeing a festive atmosphere. The music was not too loud, but ever-present. Families sat at tables loaded with food, enjoying their Sunday afternoon. 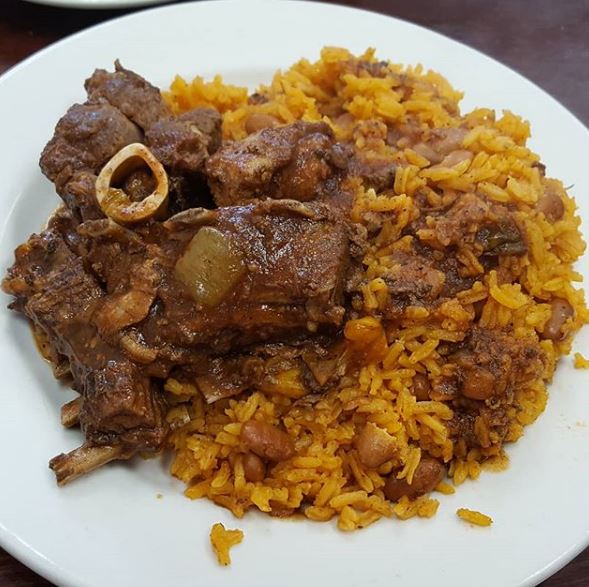 After picking out our order, we grabbed a seat and the food was brought over moments later. We each had the same entrée, a goat stew called Chivo. It was served with a heaping side of rice: mine lighter with pinto beans, while his was “negro”, containing black beans. Both were delicious. The stew itself was exceptional. I have had goat several times but this was the most tender of preparations. The meat could be easily pulled off the bone, cut up, and mixed in with that glorious rice. No knife was required. Now, at this point, we already had more than enough food. The rice must have brought the weight of the meal to over a pound. But wait! There’s more!

Hitting the table was a small plate containing a block of something which he described to me as “Spanish Lasagna”. It looked the part—a cross between lasagna and a Greek Pastichio. Another heavy dish that resembled a brick. On the bottom was a layer of ground beef. Above that, mashed plantains. Then came cheese melted over the top as it baked in the oven. Now, I tasted this and thought it was excellent. However, Justin remarked that it is usually made with plantains which are not as sweet. The difference in flavors was wide-ranging: the beef was savory yet subtle, the plantains were sweet with an almost dessert-like quality. He expressed mild disappointment in that aspect but enjoyed it overall as did I. 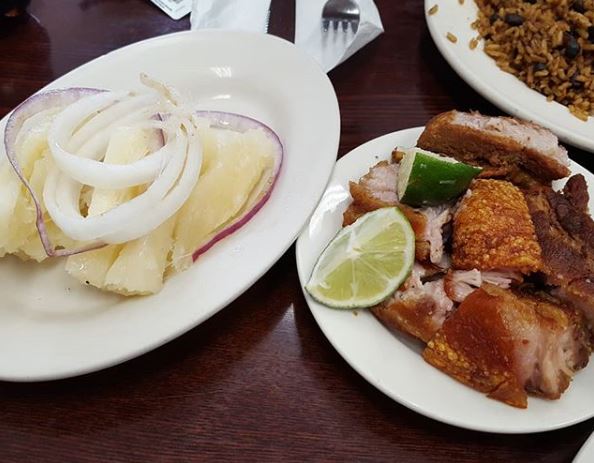 If that was not enough, on came two more plates. There was the classic staple Chicharron (fried pig skins) which I had several times before, and a warm yucca salad. In this, the yucca was sliced into strips and topped with pieces of raw red and white onions. Even though the root vegetable itself is not exactly the lightest on the planet, it was a refreshing sight. It was soft and easily broken apart with my fork. But it was the onion that was the star of this side. A nice crunch and spicy bite helped make this a palate cleanser when jumping back and forth between the goat, rice, and “lasagna”.

The only downside of this entire meal was the chicharron. Justin and I both agreed that it was not crispy enough. Now, ordinarily, this has never been something to order if watching your weight or cholesterol as it is essentially fried fat. But if sliced thin, it goes down easy like a cracklin or potato chip. This was just cut too thick. It was spongy and kind of soggy. There was no need to have more than a bite or two before pushing it aside.

As I was contemplating heading to the nearby medical clinic for a Lipitor prescription, the waitress brought over one more item: tostones. I wanted to collapse to my knees and throw my arms up in the air exclaiming, “What are you doing to me?!” Of all the food, tostones are probably the most well-known amongst us boring white folk. And what’s not to like? Take a plantain, deep fry it, cut it, smash it into patties, and then deep fry it again. While time-consuming, it is an easy dish to make, but very easily ruined. Often times, they get soggy from sitting around. When you consider a restaurant like this having everything already cooked and heated, normally you can take a pass on it. But here at Don Manuel, they were fresh and crispy. Justin had the novel idea of dousing these in hot sauce for a wonderful way to end the meal. Rather than go for some flan, which would have surely done me in, I relished an extra tostone or two, the sweet and spicy bringing me feelings of sheer joy. The total cost for this feast, including bottled water and soda? A mere $28.

It is hard to have an experience to top this. As this is the first restaurant review I am typing since our community’s beloved Anthony Bourdain died, I would like to echo one of his sentiments. Of course the food is important, but that is only part of it. The dining experience is about who you are eating with and where you are. The chance to explore another culture in a place that most would just drive right past is a special one. Eating at Don Manuel today was far from making me a world-traveler, but for just one hour I didn’t feel like I was in New Jersey. I felt transported. Any restaurant which can accomplish this deserves recognition. 4 out of 5 stars.