What we ordered could not have been anymore American: a pizza, a burger, wings, and beer. Somehow, MJ’s has eluded me in the 23 years or so that I have lived in this area. I was riding around with my friend Jason. We were originally going to head into Red Bank, but were pressed for time. With this place right around the corner, we headed over on his recommendation. He is a regular there, and he and his family love the pizza and wings. I did not know what I was in the mood for, all I knew is that I was hungry.

The interior of MJ’s, for a casual sports bar and restaurant, is actually kind of cozy. I did remember being inside this building many years ago when it was a different business, but I cannot recall what the name was. Anyway, we sat down and had an incredibly friendly waitress. I started out with a Sam Adams Boston Lager. Something just screamed “Wings!” so we ordered a dozen of those to share. Of the many items on this all-American menu, I was torn between a chicken panini and the penne vodka pizza. I then decided that I could get such a sandwich anywhere, and Jason was gushing over how good that particular pizza was. 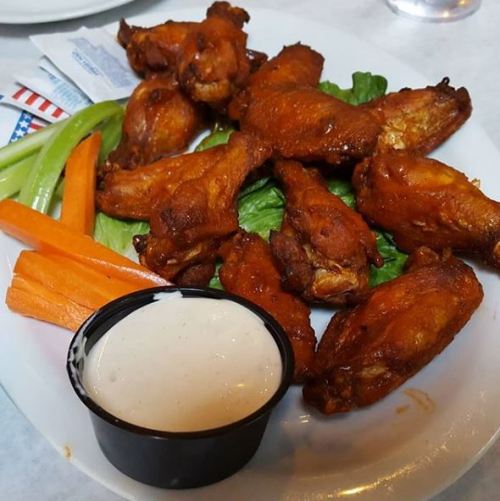 The wings arrived and we dug in. They were plump and only had a minimal amount of sauce on them, which I prefer. They still provided the mess that wings require, but they stayed crispy because of this. They were delicious when washed down with my cold beer. Jason ended up getting a barbecue burger that was on the specials menu which included cheese, bacon, and barbecue sauce.

As for my pizza, I did not know what to expect. MJ’s is somewhat known for it, but how good could it possibly be. The answer? Very! When I ordered it, I was asked if I wanted thin crust or regular. Before I could answer, the waitress recommended the regular just because of the weight of the pasta. She was correct. Such a heavy pizza never grew limp or fell apart. It was crispier and sturdier than most specialty pies I’ve had at competent pizzerias. There was just the right amount of cheese and sauce, and the pasta was cooked perfectly. The guys in the back definitely knew what they were doing. Wanting leftovers, I ordered a small instead of a personal, and was able to save two slices to take home. And they barely made it home.

This is a cool place to hangout. We sat in the dining area, but I imagine the bar room would be a lot of fun. They have plenty of TV’s, good prices (beer was $4.69), more than adequate food, and friendly service. I am going to give them 3.5 out of 5 stars. This was not just pub grub, but actual quality eating.