Even with good food, sometimes service can be the difference between a 3 and a 4. My mom and I were looking for a place to have lunch after a busy day closing our house for sale last week. Mentally, we were exhausted. It was an odd time of day, just after two in the afternoon. I hadn’t eaten anything yet. I was starving and in the mood for breakfast. The massive menu was pretty typical of any Jersey Diner—not that I am complaining. I noticed a section of stuffed French Toast and decided that is what I was going to get.

Without any emotion whatsoever, the waitress took our order. I got the banana stuffed French Toast while my mom got the one with Nutella. About fifteen minutes later, our meals hit the table. They were impressive and delicious looking. Two thick slices of Challah bread with grilled to a slight crisp, stuffed with bananas, and topped with whipped cream and wet walnuts. Add some butter and syrup to that and the result was a dangerous, succulently sweet, dessert-like breakfast meal. My mom enjoyed hers as well. 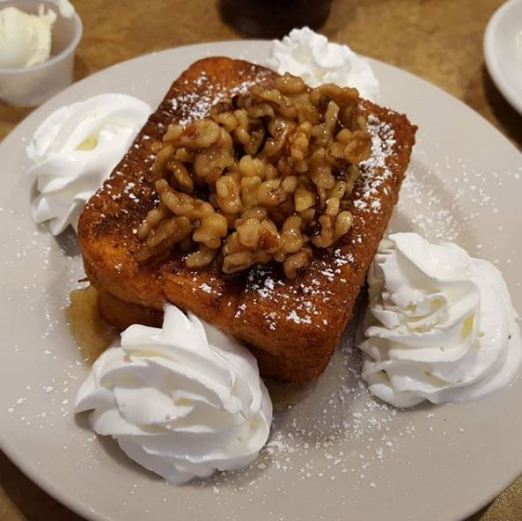 Upon setting the plates down, that was the last time the waitress came over. She literally put on a jacket and walked out of the restaurant through the back. Wanting a refill on coffee, I stared around looking for someone. There were two people behind the counter and another doing book-work by the register. Finally, another waitress pleasantly came over with a refill. She was nicer than our main waitress who emerged some time later with a notebook. I think she was taking inventory. After we finished, we sat there for 20 minutes. No one came over with a check or to ask how it was. Mind you, we were now the only table in the restaurant at this point.

Wanting to actually pay and not just walk out, I had to go up to the counter and ask for the check. When it came time to pay, I stood there another two or three minutes before the lady would look up from her work. They did not seem in much of a hurry to take my money, or anything else for that matter. Two French Toasts and two coffees, and we were there nearly an hour sitting in an empty, awkwardly silent restaurant. While the food was actually really good, I do not know if I would ever go back again. With so many diners in this area, you get one shot to stand out and make me come back. The folks at the Red Bank Diner seemed so immersed in anything and everything besides actually serving their customers, so they are getting a 3 out of 5 stars from me when it should have been higher.