Eating at a gas station-themed restaurant was admittedly never high on my list of priorities. Quaker Steak and Lube is a Pennsylvania restaurant chain where “back in the day” you could get a steak while waiting for an oil change or maintenance done on your car. While there is no longer a garage or mechanics, there is a cool and fun atmosphere inside…if you enjoy eating surrounded by license plates and automobile paraphernalia. The menu is fast-casual and gigantic. It’s like an Applebee’s on steroids. They are known for their wings and steaks, and while I was not ready to drop twenty bucks on a steak at a restaurant with “lube” in its name, the wings were worth a shot.

I was with a friend and his brother last month, celebrating his birthday. We gave him a choice of any place he wanted to go, and feeling like wings, chose here. There’s hardly anything healthy available. Only a few days away from the new year and dietary promises made our order of the “4-wheeler” necessary. This was a mammoth portion of onion rings, mozzarella sticks, fried pickles, and Bavarian pretzels. It also came with sides of beer cheese, ranch dressing, and marinara sauce. I must say, the pretzels were excellent, and so was the cheese dipping sauce. As for the rest of the fried novelties, they were not spectacular. The usual. But at least they were not greasy. 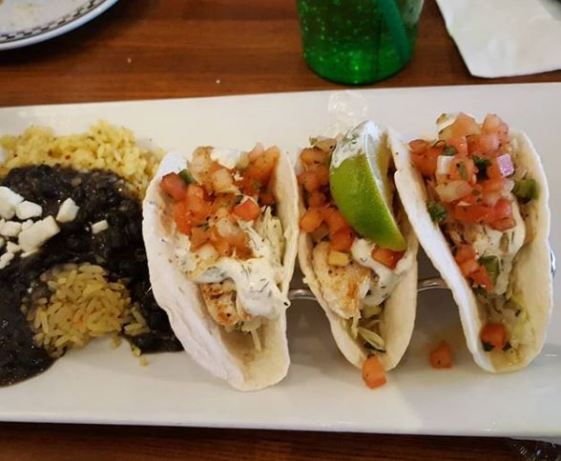 For meals, the three of us shared an order of the Mahi fish tacos and a bucket of boneless wings. These were covered in a mild sauce that tasted pretty good. As was the case with most boneless wings, these had a lot of breading. Interestingly enough, Quaker Steak has a selection of what seemed like 20 different varieties (and heat levels) of sauces, the worst topping out at 500,000 Scoville units and requiring a waiver to sign. If you finish the order, you get a t-shirt and a spot on the wall of fame. It was enticing but I decided against it. Instead, I got a side of the third-hottest (a dry-rub) which I dipped into and did not think it was too hot. Maybe next time I will attempt the challenge—I’ve built up quite a high tolerance over the years. As for the tacos, the fish was a little chewy but had good overall flavor. It was also grilled instead of fried, which was a welcome sight.

What to make of this place? I’d say for food of this caliber, it certainly ranks light-years ahead of Applebee’s, which is my go-to chain comparison for its general awfulness. For all the fried stuff we had, nothing was greasy or overly salty. Prices were fine. I would definitely go back, and maybe—maybe—try a steak. But those pretzels, man, they were good. I’m going to give Quaker Steak and Lube a 3 out of 5 stars, but there is room to grow. It seems like a fun place.

Quaker Steak and Lube is located at 561 US-1 in Edison, New Jersey.