I had a craving for Indian food in Matawan. Ordering from Neelam or Bollywood Tadka was out of the question. I then decided it was finally time to give Amravathi a try. Well, I actually had eaten there before, according to my parents. I was a small child, and we had not yet discovered Neelam. Being so long ago, this review is based entirely on my most recent order. Indian is not something I usually get for takeout/delivery, but the stomach wants what the stomach wants. 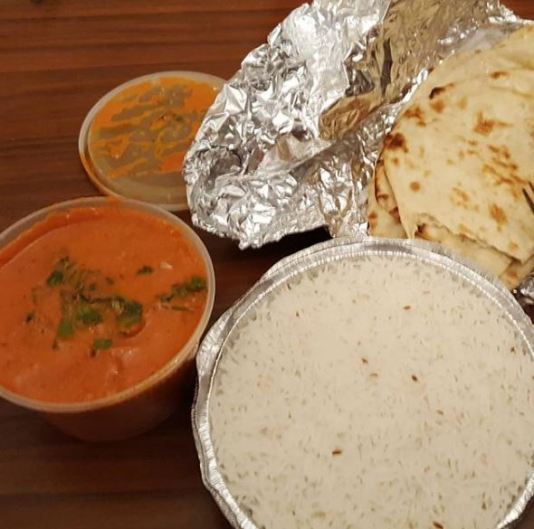 With an Indian restaurant that is new to me, I feel compelled to go with either Chicken Tikka Masala or Makhani. Both are classic staples with a creamy tomato base and if you cannot succeed in cooking them, then there is no need to go back a second time. I went with the Makhani, and asked for as spicy as possible. On the side, I got two orders of Naan bread, so my friend who was with me could try some—she never had Indian food before, but became a fan after trying some of mine.

The chicken dish was $11.95, while each order of Naan was $1.95. Not bad at all. The food arrived and my bill was over $21. I am trying to figure out how this could be unless they charged a delivery fee. However, there is no fee posted anywhere on their website, nor did the person who took my order over the phone mention it. Add a few bucks as a tip to the delivery driver, and this became one of the most expensive cravings I’ve ever had. It really caught me off-guard, and honestly, annoyed me.

But how was the food? I would not rank it up there with my two beloved Indian restaurants mentioned above, but it was good in its own right. The sauce was spicy as I asked for—enough to give me a runny nose, which was acceptable for a takeout order in a restaurant I’ve never eaten at before. The Naan breads were large, as was the tray of Basmati rice they gave with it, which was complimentary. Had this meal been a little cheaper, I’d say I got a bang for my buck because I was stuffed and could not finish the rice and bread. But for that price, I’m still left with a sour taste in my mouth.

Because my ratings are all-encompassing, I have to give them a 3 out of 5 stars. The food was good enough to entice me to dine-in next time and sample a wider variety of food on their menu. Portion size was fine, delivery service was prompt enough, and they heeded my spice request. But the price and those mysterious few dollars bring it down a half star. Perhaps another visit will entail a higher rating.