I always thought the Turning Point (a small NJ chain) was a place where soccer moms went to complain about their children’s teachers over breakfast after dropping the little darlings off at school. I never actually considered this would be a restaurant I would enjoy, despite its immense popularity. Within five minutes of sitting down on a Friday late-morning, the table next to us rattled off one complaint after another. One’s kid had too much homework. The other’s was playing in a fall baseball league and the practice schedule was too rigorous. Gee, I thought, some stereotypes exist for a reason. The only thing missing would have been a post-meal trip to Target, err, excuse me, Tarjay.

Speaking of stereotypes, my friend and I were in the mood for brunch. I had a long day ahead of me at the museum, including meeting up with some friends to play hockey a couple of hours later. Seeing an Artisan Avocado Toast option on the menu was a welcome sight. This power-meal was listed as a breakfast appetizer. It’s something I could easily do at home, but as is the case with a lot of food, it just tasted better having someone else make it. A thick slice of multigrain bread was covered with mashed avocado, plum tomatoes, extra virgin olive oil, crushed black pepper, and sea salt. It hit the spot, but that was about as healthy as it would be for me. 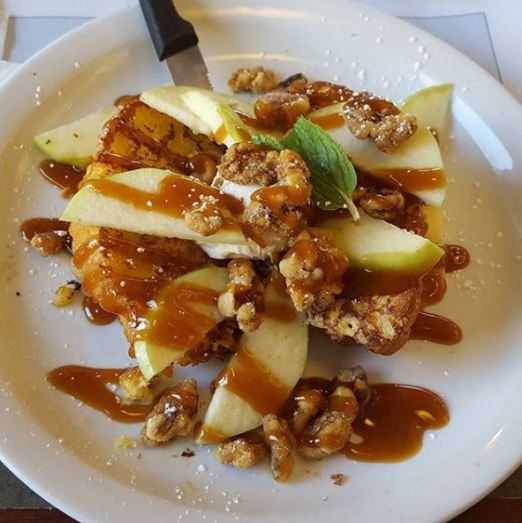 While he had the seaside breakfast hash (shrimp, poached eggs, and chorizo gravy over potatoes), I had the corn bread French toast. This unique offering is something I had never seen done before. It was mammoth when it arrived. Actually, I think it was a corn muffin, not bread, but it doesn’t really matter. The meal was delicious. The corn bread/muffin was toasted beautifully and topped with thinly sliced apples, honey walnuts, caramel sauce, and a dollop of vanilla mascarpone. All the ingredients were plentiful. There was sweet, salty, creamy, crunchy, and smooth all on this breakfast creation. But could it actually be considered “French Toast”? Not really; the bread/muffin seemed just grilled rather than dipped and grilled. This is not a complaint about flavor, because I enjoyed it, just the labeling.

To drink, I had a pot of the French press coffee. There were a few different kinds to choose from, but in the spirit of October, went with the extra strong Jersey Devil blend. And strong it was. But also delicious. Not too acidic and no unpleasant aftertaste. It was the kind of product that all bold coffees should be modeled after. The French press was a first-time for me. It was priced at $6.50, but for the quality and the fact that I got what seemed like five cups out of it made it worthwhile. They brought over a takeout cup at the end so I could take the rest home. I usually drink coffee black (and never with sugar or sweetener), but something so luxurious called for just a few drops of cream. Rather than sugar, they give you crystallized sugar on a stick. Stirring the coffee with this allows the drink to be kissed with a little bit of sweetness without going overboard. He had a special fall-themed latte and enjoyed it.

The Turning Point offers a lot of good by way of breakfast, brunch, and lunch. There are so many enticing choices on the menu that it was difficult deciding what to order. Unlike other breakfast places and diners, the quality of food is higher and the care and attention to detail in the preparation of such food is noticeable. Our server was extremely pleasant, and did not rush us at all despite being pretty busy. I would definitely go back again. 3.5 out of 5 stars.

This Turning Point location is situated at 2132 Route-35 South in Holmdel, New Jersey.