There was a cheesesteak staring at me on the menu with ingredients such as Guinness-soaked onions, hot cherry peppers, and two kinds of cheese that had my mouth-watering. Then a near-full page of French Toast beckoned. After our friendly and super-knowledgeable waitress explained the menu and noted how Meemom’s is known for their French Toast, I figured a first visit to this place required such an order. But which one? Every unhealthy and un-Godly thing somehow managed to make its way into one or another. Anything from bacon and pulled pork to peanut butter, blueberries, brownies, cookie dough, or bourbon-infused marscarpone. It’s a place you could take someone if you wanted to gradually kill them in the sweetest way possible. Admittedly, I stared at the menu for 15 minutes before I made up my mind.

The “Tipsy Piggy” French toast seemed like something I would enjoy. Three thick slices of toast topped with bacon, that bourbon marscarpone, and vanilla and chocolate sauces. The mammoth portion filled the plate, leaving enough room for a tiny silver pitcher of warmed maple syrup. That’s the item that pretty much put this over the edge: warm syrup. So many diners and pancake houses that should know better take the lazy way out. Generic bottles of syrup remain out on the table all day. They have the flow of molasses, the taste of crystallized fructose, and the ability to wreck a delicious breakfast with their frigidity. So thank you Meemom’s for taking care of this minor detail.

Anyway, on to that sugary, savory, scrumptious pile of French toast in front of me. It was almost indescribable. I mean, just look at the picture. As soon as it hit the table, I knew I was going to enjoy this monster. The bread itself was sturdy but not overdone. There was an adequate amount of bacon, chopped ever so fine. It was prepared in such a way that you knew it was there but it never out-shined the main event. The chocolate and vanilla sauces when swirled around with the maple syrup could put you into a food coma. Oh, and how could I forget the bourbon marscarpone? You actually could taste the bourbon. 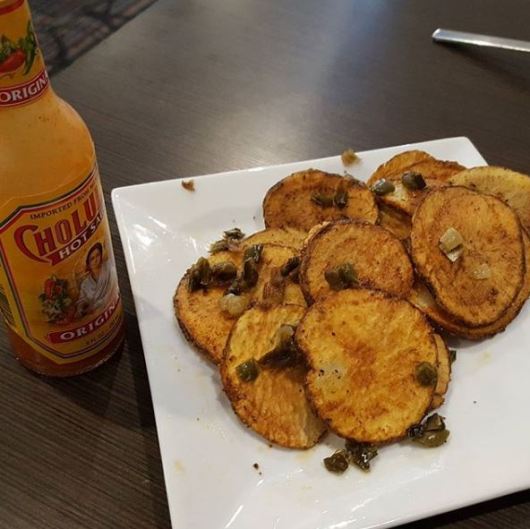 On the side of that, I figured I would try the “spuds”, which are essentially homemade thick-cut potato chips. They had a nice seasoning on them—the saltiness was much-needed to counteract all that sugar I was ingesting. It appeared they were topped with diced onions and possibly pickled jalapeno. I asked for hot sauce to go with it instead of ketchup making this simple side a homerun.

This is a place where you can just feel the love emanating from every bite you take. I don’t think I’ve ever said that. This is comfort food at its finest. The polite and warm service brings this experience up to even higher levels. While the sandwiches sound amazing, I implore first-timers go for a French Toast like I did. I am giving them a 3.5 out of 5 stars…for now. I’ll be back.