I hadn’t been to the Middletown Pancake House since I was 13 or 14—so, a long time. It’s one of those places I drive past at least once a week without much thought. When we first moved to New Jersey when I was much younger, we were semi-regulars here. Some time later, that came to an end. There were just too many diners and breakfast places around for the “MPH” (as they call themselves) to compete, especially when offering what I remember was average food and what could be downright unpleasant and nasty service. My mom and I were looking for a quick lunch two weeks ago. She had just been there with a friend and said to give it a try. When I walked in, I noticed nothing had changed.

The place is clean, somewhat charming, and very Lancaster-like. However, it is horribly dated and the country decor just screams “Grandma’s Parlor”. But that quickly makes sense when you realize the wait staff was comprised mainly of senior citizens. I don’t mean that latter part as a knock—our waitress was as sweet as anyone. Very pleasant, warm, and attentive. So that part, at least, from my childhood memories seems to have been fixed. The customer base is not much younger, though.

The Middletown Pancake House has a menu that is somewhere between a “pancake house” and a diner. They are not open for dinner, so many of those dinner classics are nowhere to be found. It’s actually kind of refreshing. There are a decent amount of sandwiches and burgers if you are in the mood, but because of its namesake, I just had to go for pancakes. But which ones? The menu had three that caused debate: carrot cake, pumpkin (seasonal), and potato. I narrowed it down to the last two and asked the waitress for her recommendation. She said that people come in specifically for the pumpkin pancakes (“they wait for it to come to the menu this time of year” were her exact words), and she guaranteed I would like them. I went with that, figuring I could get the enticing potato pancakes any time. 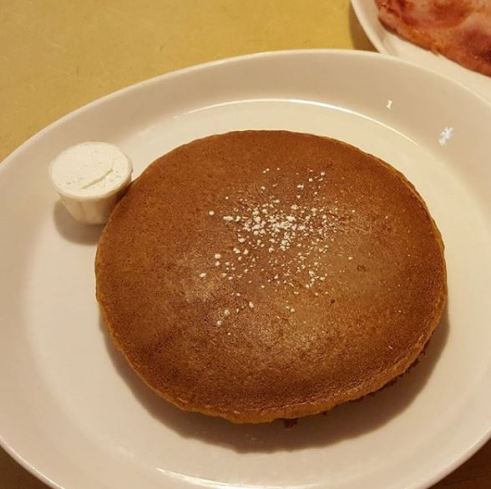 With a coming attraction full of accolades, I admit, I was expecting more. The plate arrived with three very average looking pancakes. The pad of butter with it was microscopic. At first bite (without maple syrup), I thought they were just okay. As I made my way through with some butter and syrup, I developed more of an appreciation. They were good, not great. I cannot see what the fuss is about. The consistency was light and kind of spongy. They actually tasted more like gingerbread than pumpkin spice. Different and unique? Maybe back in MPH’s heyday, but with everything pumpkin now, they did not stand out with a bang. Can I recommend them? I’m on the fence. I added a side of ham which was so incredibly salty that I had to pour syrup on it to balance out the tongue-shriveling amount of sodium that was shocking my body. Throw in some lukewarm coffee, and you have a not-bad-but-hardly-worthwhile experience. My mom’s French Toast was also nothing to write home about. I’ve made better myself.

Even on the way out when paying the bill, the manager said, “Who had the pancakes? Oh, aren’t they just great?!” I nodded. In my head I am wondering if these are supposed to be amazing and they weren’t, then how are their other products? Middletown Pancake House gets (I think) a fair 3 out of 5 stars. I still would like to come back for potato or carrot cake pancakes, but I’m not in a rush. I liked what I had, but I am still pondering how they stay in business with so much competition.

The Middletown Pancake House is located at 1610-NJ 35 in Middletown, New Jersey.