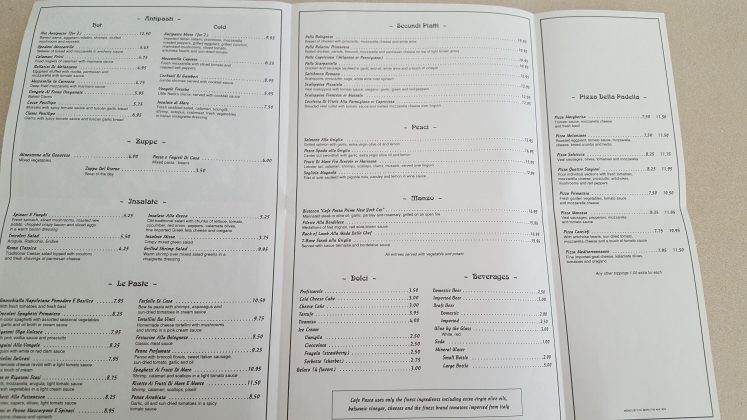 Why do certain restaurants pop into our heads? Ones that we are fond of, and some we wish we had still forgotten. That’s where this series comes in. It’s not quite in the “Restaurants We Miss” territory. These are just the places worthy of a quick reminisce, or maybe because I cannot remember enough about them to develop a lengthy post.

I remember only one thing about Cafe Pasta, and it has nothing to do with food. My parents had gone there for many years—over a decade. I was born on Staten Island in 1991 and we moved to New Jersey in 1995. We went back to this restaurant a few times after the move early on, but my parents were regulars there in every sense of the word because they lived right down the street. I get my restaurant prowess from them because even at such a young age, I was out to dinner with them. Okay, so they absolutely loved Cafe Pasta. I cannot speak for anything, though. I don’t remember what the place looked liked or how the food was. This would not have even crossed my mind if I did not find the menu pictured above.

The one solitary memory I have of Cafe Pasta occurred when I was [we think] five years old. As I said, my parents were regulars. They knew the wait-staff and even the chef, whose name was Pierre. I guess I was quite the charmer at that age, because during my birthday dinner there one night, I was asked to go into the kitchen. A waiter led me to Pierre, who was standing with a large box. I opened it up to reveal a toy train set inside. I carried it back out to my parents who were in shock at the large gift I was holding. If memory serves us, the staff had chipped in to get me a birthday present. How many people can say something like this happened to them?

Cafe Pasta closed a while ago. After moving to New Jersey, my family eventually stopped going. According to this article, a fire gutted the building in 2007 but it had closed way before that. As of 2015, the shell of the remaining restaurant has sat vacant on Hylan Boulevard waiting to be leased. The rental rate for that property was $260,000 a year as of two years ago. Who knows what it is now?

Other than that, there is not much about this restaurant online. It has a Yelp page, though it was long-gone by the time it was even created. There are only two reviews, both scathing, but they were done years after it closed…when the business could not defend itself. Thanks for the memories, well, memory, Cafe Pasta. Do you remember?