I came to appreciate a good scotch somewhat late in life. My experiences as a younger man tended to be with brands and styles heavy in smokey, peaty flavors, of which I am not a fan. So I avoided scotch, preferring instead a good Irish whiskey (Bushmills remains a favorite). It was only later that a bartender (in Stockholm, Sweden, of all places) enlightened me to the wider pallet of flavors available under the scotch moniker.

I had tried a few of the usual single malt suspects, especially the two Glens – Glenlivet and Glenfiddich – and quickly realized that “scotch” indeed didn’t have to mean the heavy flavors I had learned I disliked. I am not a foodie by any means and never became a wine snob. Yet when it comes to whiskeys and scotches, I find myself able to wax poetic about complexities of flavor, nose, palate, finish, and other equally obnoxious affectations. I learned how there is actual science behind adding a few drops of water and that the shape of the glass really does focus the aromatics and enhances the experience of imbibing.

I don’t remember exactly when I had my first glass of The Macallan, but this Speyside single malt was the first I had that lived up to the hyperbolic ‘froo-froo’ appellations of the side of the box. Like most distilleries, they offer a portfolio of different types – different ages, casks, etc. (And, to be fair, I admit I have not tried the full ranges of the Glens or other brands, so perhaps they have comparable I am just not aware of.) There is a 10 year, but I settled on the 12 since it doesn’t sell for that much more a bottle.

The website describes the nose – the smell or aromatics – of their 12 year as “Vanilla with a hint of ginger, dried fruits, sherry sweetness and wood smoke.” I would concur – Stephanie doesn’t drink scotch, but even she likes the aroma. As for palate – the taste while it is in your mouth – they describe it: “Deliciously smooth, rich dried fruits and sherry balanced with wood smoke and spice.” I found it to indeed be very smooth with a warm, slightly ‘spicy’ tone. What “wood smoke” there is remains well in the background. But what really sets Maccallan apart for me is the finish – the aftertaste once swallowed – which they describe as “Sweet toffee and dried fruits, with wood smoke and spice.” There is a rich, warm, toffee-like flavor that is not overly-sweet, but almost “creamy” in effect. I have yet to find this in any of the other scotches I have had to date – including some expensive brands. 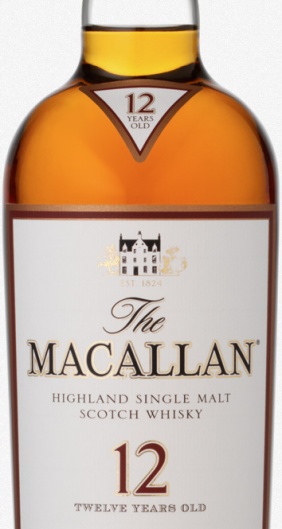 A few weeks ago, I was at a liquor store where the Macallan Double Cask 12 year was on sale, and just a few dollars more than the 12 year. I took the opportunity to give it a try. Described as “Creamy butterscotch, toffee apple, candied orange, vanilla custard, and fresh oak,” I found little to disagree with. The palate was rich enough. Where it fell short for, however, was in the finish – none of that warm, pleasing afterglow of the ‘normal’ 12 year. It just sort of stopped short after the swallow. The website describes it as “Oak lingers, warm, sweet and drying.” For my taste buds, it could be more succinctly described as “disappointing.”

The “Double Cask” refers to aging in both European and American oak. The European oak is described as imparting “dried fruit, sherry, wood spice and a richer color,” while the American “brings vanilla, citrus, light oak, and a lighter color.” By contrast, the single cask 12 year is matured in Spanish oak casks previously used for sherry. The Spanish oak is known for open grain and high tannin content. The difference between the single and double cask scotches appears to be largely from the influence of the wood in the maturation process. For my tastes, the single 12 year sherry oak cask has that extra layer and strong finish that sets it apart. I ended up leaving my bottle of Double Cask with a friend after a tasting party and haven’t missed it.

The price of Macallan explodes exponentially with age. The 12 year is manageable enough to be my ‘go-to’ scotch – as opposed to a bottle that only comes out on special occasions. The next up in the sherry cask range is 18 year and not something I will be buying frequently. Even a glass at a bar can be pricey compared with the 12. So I was eager to give it a try as part of my 50th birthday with the blessings of Stephanie. We wanted to try the new Oscar Wilde themed bar that had opened across from her office in Manhattan. Last Friday, we were going on a history of the cocktail tour in the East Village and used both this and my natal anniversary as the excuse to indulge. It is over-the-top Victorian decor to the point of sensory overload, but boasts the longest bar in the city and a vast range of alcohols and cocktails. 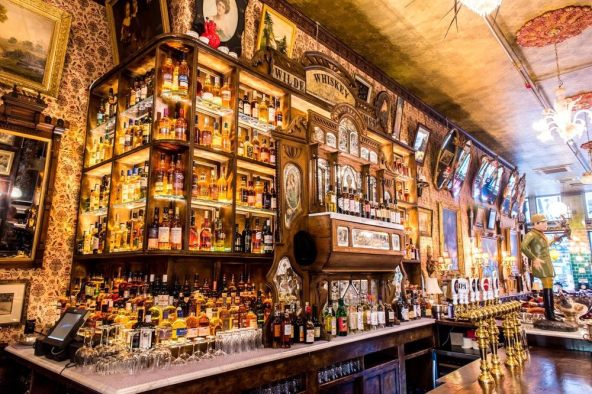 My curiosity about the 18 was, as much as anything, to see if you really do get something more for the added expense. I have had more expensive Bushmill’s, for instance, and did notice I got what we paid for. I have had expensive Glenmorangie and was left somewhat unimpressed, though it was more a matter of personal taste than a failing in quality.

I found this to be largely accurate. The nose is not dissimilar to the 12 as is the palate, though there is an added richness to the overall flavor. The finish was also robust as with the 12, but different. The rich creamy “toffee” was there, but the dried fruits muted sweetness was stronger and the slight edge of the ginger. It’s hard to say it was “better” than the 12, as much as it was distinct and wonderful it its own specific way.

Worth the money? Yes. Did it ruin the 12 for me? No. Both are delicious and keep the Macallan brand at the very top of my list when it comes to favorite scotch.

There are also 25, 30, and 40 year though unless Greg starts paying me for these contributions, I doubt I will be trying them any time soon…

Gordon Bond is a NJ native with a passion for Garden State history…and finding a good single malt scotch. In 2008, he founded Garden State Legacy, a free online quarterly NJ history magazine and resources website. He has written five books and numerous articles on a wide variety of NJ history.