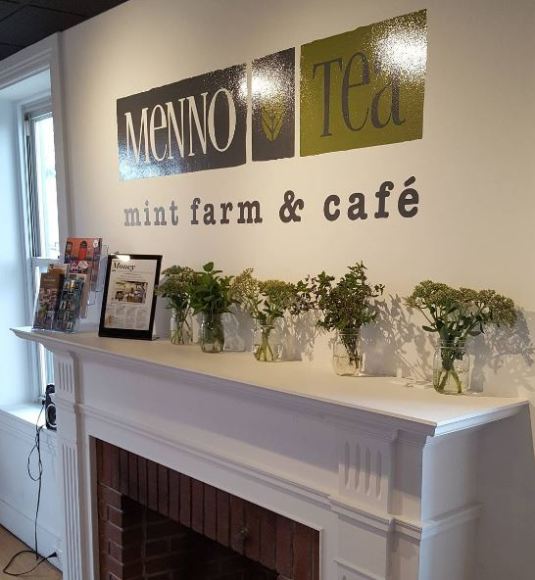 Hipsters have arrived in Lancaster County! Just kidding. Well, maybe not. Across the street from the bustling Bird-in-Hand Farmer’s Market is a charming, new cafe located in an old brick building. It’s called Menno Tea. They have a naturally grown, organic mint farm nearby and specialize in infusing coffee and tea with their mint. No doubt a play-on-words with Mennonite, this company has the right idea but the wrong execution.

I love small businesses like this, but natural and organic are only meaningless buzzwords if your product doesn’t taste good. Mint flavored tea? Certainly. But mint coffee? I thought this was an odd combination before I ordered it. I talked myself into it because cold brew coffee with mint was the top item on the menu. A specialty. Surely it must be tasty. I had mine iced and black. My friend had his with a scoop of vanilla ice cream and seltzer, a Frankenstein take on the Egg Cream. We also threw in a chocolate mint whoopie pie. After scarfing that down in a couple of bites (it was delicious) we both made our way to the coffee. A sip each and there was silence. My tastebuds did not know what to do. He made not a sound either. No comment. He swirled the ice cream around with his straw without saying a word.

After ten minutes of staring at the table, we went outside to walk to the market. I had only taken three sips when I broke the silence: “This sucks”. Wanting to be polite since I paid, he quietly responded, “I don’t know what to make of it”. On my way to the garbage can to toss this out after those three unbearable sips, I said, “It tastes like rye bread. Like [expletive deleted] rye bread”. “You know what…you’re right”, he affirmed with a wrinkled nose. Into the can mine went. I told him, “If you don’t like it, just throw it out. You won’t hurt my feelings by becoming a martyr”. He said, “Maybe if I let the ice cream melt more it will be better.” Less than two minutes later, I did the honor for him by throwing the $5 worth of funky brown water into the trash.

We both stood in the parking lot in a stunned silence. There was commiseration but no detailed pre-blog conversation. I had to break the silence yet again, “I feel like I need to eat something that’s very bad for me.” So we went into the market and each ordered a bratwurst. Memory erased. By the way, the bratwurst was very good. We ate them at a counter service called Barbie’s Sandwich Shop. With each bite, the meat in tube form blasted away the awfulness of the mint coffee.

Anyway, I guess I have to give Menno Tea an actual score. I’m going with what I think is a very fair albeit lenient rating of 2 out of 5 stars. The service was pleasant, the whoopie pie soft and fresh, and the interior design of the cafe very sleek. But nothing, and I mean nothing, can make up for what they did to that coffee. Such a combination does not need to exist. There’s a reason why the market across the street had more cars than parking spaces and we were the only two people in this place.