“Like horseshit at a racetrack” you could say of us on this two and a half day getaway to my beloved Lancaster. And that’s exactly what it was: a getaway. I can hear the sirens now. After all, in times of stress, we find comfort in familiarity. I was not even concerned with blogging or finding something new on this trip. This was an attempt to recalibrate and unwind. However, we did try a couple of new things including a cafe, brewery, and the latest Hilton hotel. Full reviews of those are coming, but below are some quick hits of our busy excursion.

After arriving in Lancaster around noon and having not eaten breakfast, we went to—you guessed it—Dienner’s for lunch. The buffet lunch was something we tried for the first time only last year, after being a breakfast-only customer for my entire life. Excellent baked ham, chicken and dumplings, and a dessert bar that could exist as a standalone. It was a great way to start the trip before heading to Cackleberry antiques.

We then headed to the Kennett Square area for some antiquing at places I have already covered, including the Pennsbury Antique Mall and Brandywine River Antiques, both in nearby Chadds Ford. I picked up another bar sign for my collection. I’m in the process of downsizing, but whiskey signs will still be collected. From there, we were off to Longwood Gardens for a luminary display and fountain show in the newly reconstructed and renovated fountains. They have been the talk of the horticultural world since their May unveiling. They were gorgeous. Stunning. However, the nighttime show left a lot to be desired. Basically, the same routine over and over again set to different colors and music. It was a masterful feat of coordination, but boring and went on forever. We left halfway through to beat the traffic. Like last year, I had the best damn pretzel ever in the beer garden (along with a decent mushroom pizza), and an ice-cold Stella Artois. So not a total loss. 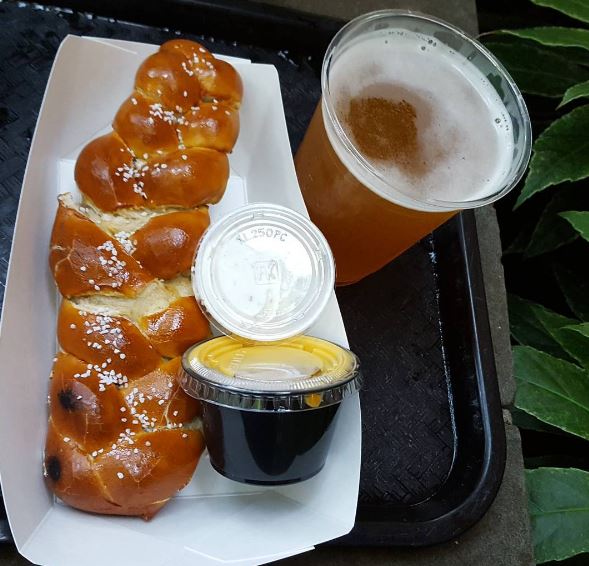 File this under “unexplained”: during the fountain show, I shot a short video. It was about 30 seconds long and posted to Instagram. It was submitted without comment so you cannot even say that my above feelings caused what I am about to tell you. By the time we got back to the hotel, the video was reported/flagged as inappropriate by three people and placed under review by Instagram. That was my 965th post and the only one to ever be flagged by anyone, much less three different people. Could it be that Longwood Gardens actually has their employees flagging videos people shot during the show so there are no freebies for people watching at home? I say this as a member and ardent supporter of Longwood, but it caught me off-guard. What else could it be? Someone please tell me.

The next day we were up early for a trip to the Green Dragon in Ephrata, his first time. After being spoiled by Roots Market in Manheim, I was really disappointed. I had not been there in a couple of years, but it seems to have taken a downhill turn. The flea market aspect hardly had any regular people selling their stuff, but rather dealers who line up rows of cardboard boxes full of cheap plastic junk. The market buildings where the food and produce are help to make up for it, by giving you a taste of local culture and the hustle and bustle. But it’s not enough to save it. Some of the sellers inside are offering collectibles and trinkets which have been sitting there collecting dust since I was a child.

Back in the county, we went to a plethora of shops. The usuals like Kitchen Kettle Village and Bird-in-Hand Farmer’s Market. The places I rarely buy anything but still need to check out anyway. We were everywhere. Paradise, Strasburg, Intercourse, Bird-in-Hand, Ronks. Lancaster has so many memories, and although I go at least twice a year, it does not get old. Aside from that, there was an excellent wine tasting and beer drinking later in the day, a bizarre restaurant experience, and the chance to explore our new hotel. But you can read all about that in the coming days. Our last meal of trip was breakfast at Dienner’s so I could get scrapple, one of my favorite things in the world.

PS: I want to insert a score for a place called Barbie’s Sandwich Shoppe, located in the Bird-in-Hand Farmer’s Market. We only grabbed a sandwich and were there not longer than 10 minutes, but I am giving them 3.5 out of 5 stars. Why, you may be wondering? Read this post to find out how the worst cup of coffee we ever had in our lives led to an awesome bratwurst.