I have been tearing through Keyport in the last two weeks. I literally live right down the street in Hazlet, but Keyport, for the most part, has been foreign territory. I’ll come for the antique shops every once in a while, but I’ve never really taken the time to eat there. That all changed with a visit to Old Glory a couple of months ago. I started to take notice of what was around. That led to trips to Nemo, the Broad Street Diner, and now, McDonagh’s Pub. I had eaten there when they first opened. I was just a kid and could not remember anything about the food. When I walked in, I was impressed with the interior. A more modern pub feel. There’s the bar, a row of booths, some tables, and an entire wall of facades including a portion which serves as a replica of McDonagh’s own exterior. You don’t see that every day.

We were walking through an antique store earlier and thinking of places to try. I mentioned McDonagh’s and pulled up the menu on my phone. The first thing my eyes caught was the 14 ounce Bavarian Pretzel. I read it off to my friend and he said, “I’m sold”. We headed on over. The pretzel was as gigantic as it would seem. It was literally hanging off the tray. Now, for something that big, you may assume that the product’s quality is that of a novelty item. A piece of food which would garner a few wows and not taste particularly great. I wondered that myself. With how massive it was, could it be cooked right? The answer is yes.

This pretzel was a work of baking art. Light and fluffy like the finest loaf of bread you could ever want, but tasting like a classic pretzel, brushed with butter and salted. It came with three dips: mustard, beer cheese, and hot caramel. The first two are mainstays with every pub pretzel I’ve ever had, but the third is an interesting take. It was delicious, and helped run the gamut on your palate with sweet, salty, savory, creamy, and spicy. The price was a little on the high side ($11.95) but for the size, it was worth it. I would definitely order again.

For meals, I was torn between a burger and the grilled cheese. My arteries tightened as I read the contents which included Irish cheddar, bacon, tomato, and here’s the kicker: fried macaroni and cheese inside the sandwich. I thought about it, but I also thought that I was not quite ready for Lipitor yet, and got a nice, healthy burger instead. (I’m kidding). Yeah, so anyway, the McDonagh’s Pub Burger is what I went with. It was 4th of July weekend after all. This was a 10 ounce patty on toast topped with melted Irish cheddar, Swiss cheese, cheddar cheese sauce, bacon, and frizzled onions. Where’s that Lipitor? 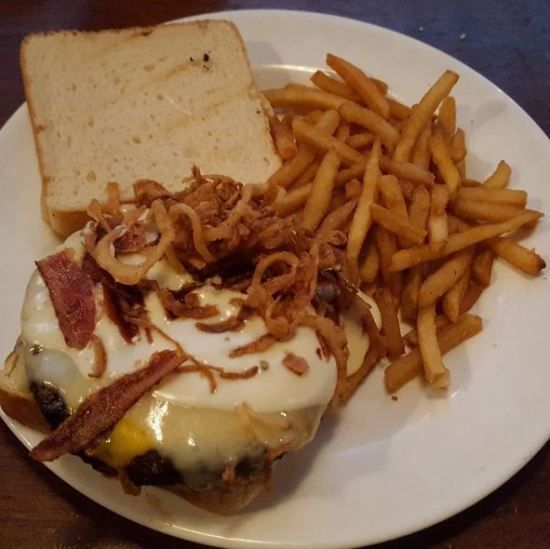 More important than how it tasted (deadly wonderful) was that they cooked it medium like I asked. Many places simply cannot (or will not) do a burger medium. It was delightfully pink and juicy on the inside with a good char on the outside. One of the better burgers I’ve ever had. He too had a burger, the Irish Cork version which had Swiss cheese, corned beef hash, and a fried egg. We swiped halves, and both of us enjoyed what we ate. These were burgers done right. The fries were thin and crispy, like matchstick fries—I just wish there were more of them.

All of this was washed down with a refreshing pint of Leinenkugel Summer Shandy for me, and a bottle of Not Your Father’s Root Beer for my friend. These were priced at $5.50 and $3 respectively, which is great for the area. Service was friendly and we were not rushed at all. This was a great experience at a place so close to home that I would not mind becoming a regular. Good food, affordable drinks, and a pub atmosphere, right in the heart of the Keyport business district. I’m giving McDonagh’s a 4 out of 5 stars rating for now, but there is room to climb. Go get one of those burgers!