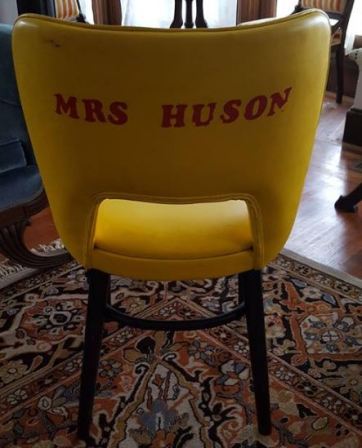 The owners of the Memphis Pig Out have graciously donated a chair from their now-defunct restaurant of over 30 years to the Atlantic Highlands Historical Society. It will reside on display at the Strauss Mansion Museum along with a small collection of photos and newspaper articles. Since the restaurant was such an important part of the town’s dining history, it only makes sense that the item would be viewed in perpetuity at the local museum. But why so much fuss over a chair? Well, it was sat in regularly by the restaurant’s most famous customer, Eleanor “Ellie” Huson. She was also the first customer of the Memphis Pig Out back in 1985 and dined there weekly in the same chair at the same table until her death in 2009 at the age of 106.

Beloved in town, Ellie’s 100th birthday party was held at the Pig Out and attended by many. In her later years of advanced age, she would be picked up by one of the owners and driven to dinner. The president of the AHHS at the time of the donation recounted upon first meeting her in 2007, “She was fond of their barbecued chicken, and always had a glass of sherry to go with it!” The Society notes they are proud and honored to house such an item (and a small collection of pictures and newspaper clippings), and grateful to owners Mark and Connie Strassburg for the donation. The museum is open Sundays from 1-4 P.M and located at 27 Prospect Circle.