Five Mini Reviews of Restaurants Visited Before this Blog

I started Eating New Jersey last September. I was food blogging on my personal website for a few months prior to that. Around that time and slightly before it, I visited a few restaurants which I did not review on my blog. I either forgot about them or felt I could not write enough for a full-fledged review. But looking back on it, it is amazing what you remember about your restaurant experiences. Because I have a few “Quick Hits” posts, I figured it was time to include these in order develop a more comprehensive dining guide. Below are a few such restaurants. While they may not have been recent, they were all within the last year.

As you may have seen in this previous post, the legendary eating establishment is closing this month after a 30+ year run. While they did have good barbecue and steaks, and an unbeatable atmosphere, the prices and portion size left a lot to be desired. I had a filet mignon the size of a hockey puck which was around $28 if I remember correctly. A tiny Johnnie Walker Red on the rocks was $8.50. My friend enjoyed the ribs he had, but the size of them for the price was not something you would expect from a place offering authentic home-cooking. As for the fries with an entrée, it would have been better if they just left them off altogether. Atlantic Highlands will not be the same without the Memphis Pig Out, but there’s a reason why I only ate there twice in my life. 3 out of 5 stars.

Fresh off Hunter’s review, I feel inclined to agree with his assessment. Overall good food and a quality of tacos superior to many similar restaurants, but high prices. Yes, it is Red Bank, so you know you are paying a bit more. I do not remember having any serious complaints. Both he and I enjoyed what we had (fish tacos and a burrito). I have not been back since, but not for any particular reason. I would definitely go again if I was in the area and craving a quick Mexican meal stop. 3.5 out of 5 stars.

When I think of the prototypical Jersey Diner, the Princetonian is one of a rare few which come to mind. I actually went there by complete accident. It was during a Trader Joe’s run across Route 1 that brought us there. We were starving. This place has been around forever—you could just tell. But it was not dated in a negative way. Just old enough to retain its classic feel. The waitress was super friendly, and rather than just constantly refill your glasses of water, they bring over a carafe of it with slices of lemons, limes, and oranges. Very refreshing on a hot summer day. My mom had a massive Greek salad (which could have fed three people), my dad had an omelet, and I had a chicken sandwich that was so big they had to cut it in three. I remember it clearly: grilled chicken, avocado, bacon, and tomato on crusty Italian bread and slathered in a type of garlic mayo. This simple addition totally made the sandwich. If it wasn’t so far away (about an hour), I would have been back several times.  3.5 out of 5 stars. 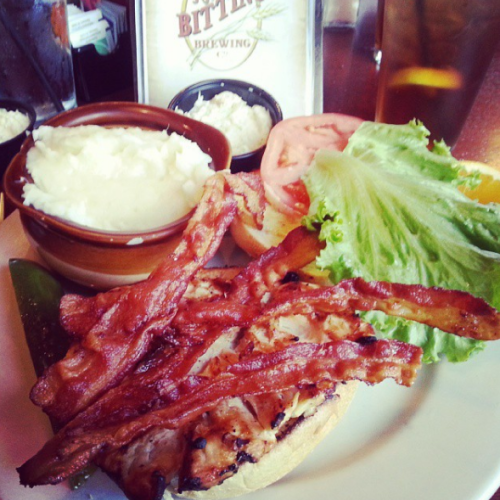 I used to love this place. When I worked in Perth Amboy, we would eat at Bitting’s regularly before or after meetings. Aside from that, whenever someone wanted to go to dinner or meet up, it would always be here. It was a nice place to hangout. Decent sandwiches, a fantastic appetizer selection, and great home-brewed beer could all be had in the atmosphere of the century old railroad-depot-turned-brewery. After more visits than I could count, last summer, I noticed the overall quality starting to decline. The service became spotty and only obsessed with refiling your glass (but was nowhere to be found for other things). The food too went downhill. They have an actual tater tot menu which no one could hate. One of the options is the Chicken Piccatta Tots. Crunchy tots are covered in bits of fried chicken cutlet and Piccatta sauce. Outstanding. After enjoying this several times, I ordered the Chicken Piccatta as a meal (one of the house specialties) and it was disgusting. A single, sad piece of chicken practically floating in butter and grease. There was no flavor and it looked downright horrid. It was the antithesis to their chicken club sandwich (pictured) which I usually ordered. One of my favorite entrees, ironically, was the quesadilla. It was gigantic (I could never finish it). I would stick to that, but Woodbridge is a long way off for some chicken in a tortilla. I love their beer, notably the Victoria Golden Ale, but I have not been back since. I miss the place and want to return, but I am wondering if it’s worth it. 3 out of 5 stars.

This is another place I used to go all the time before I eventually lost interest. The food was not bad by any means, but definitely not spectacular for the price you pay in the Freehold area. I guess I’m just used to Mexican food being cheap. My last visit was a little less than a year ago. We sat outside, each with a Nacho Supremo. This was what I ordered almost every time: eight large tortilla chips with grilled chicken and the usual ingredients for such a dish. It’s simple, made better by the substitution of the El Meson Salsa (a brown demi-glaze) instead of their regular salsa. It really brought the dish together with a sweet and savory twang. Every once in a while, I feel the urge to go there, but I have yet to feel it too badly. I’ve gone back and forth in my head for a rating, and I will settle on 3.5 out of 5 stars. Their high prices are evened out by the fact they are a BYOB. That’s a major plus.