We stopped at Ichiban for some late night drinks and snacks with friends a couple of weeks ago. It was the first time I had been in the place since it was Shogun years earlier. It looked exactly the same. The sushi bar and tables in the front, a circular bar, and hibachi grills in the back. The bartender was super-friendly. I gazed at the massive “umbrella cocktail” list for seemingly forever before I decided to go with a Johnnie Walker Black. It ended up being $9, not bad when you consider the other cocktails were between $7-10 and probably didn’t contain much alcohol. That’s always the conflict I have at places like this: fancy blue drink with an umbrella and pineapple slice or a straightforward whiskey or beer? It’s easy for restaurants to screw around. I did take a sip of my friend’s Blue Zen, and thought it was pretty good, but I was satisfied with my Scotch. 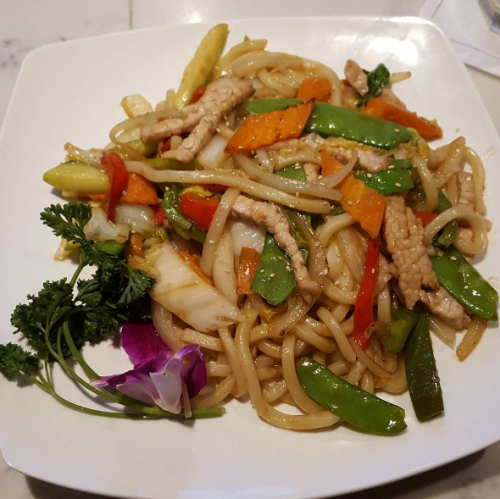 Everyone else had sushi and I went with pork yaki udon. It was as good as I’ve had anywhere else, comparable to Toki in Red Bank, which is currently my favorite Japanese restaurant. The $12 noodle dish contained plenty of pork and sliced fresh vegetables. It wasn’t swimming in soy sauce either. Overall, it was a job well done. My friend gave me a piece of her coconut shrimp sushi. I thought it was outstanding. One of the better cooked sushi rolls I’ve had. The shrimp was crispy and sweet from both the breading and a white cream sauce which was drizzled overhead. If I ever went back, I would definitely order that.

If I remember correctly, everyone had dessert as well. There was a chocolate bombe, some tempura fried ice cream, and of course, green tea ice cream for me. At only $1.95, you absolutely could not go wrong. My friend loved his fried ice cream, which I am learning is one of his favorite desserts. I am going to give Ichiban a 3.5 out of 5 stars from this limited experience. The food was solid, the bartender was friendly and attentive, and it was just a cool place to hang out. Oh, and that coconut shrimp sushi. Why don’t more places do that?