Years ago, my friend Jeff said the only two things more expensive in Pennsylvania are gas and alcohol. So far, he’s been right. I always visit the liquor stores just to see if they have anything I cannot find in New Jersey, but more often than not, I walk out empty-handed. For example, Johnnie Walker Red and Black are usually $19.99 and $29.99 respectively where I live in Monmouth County. Out here? Try $25.99 and $38.99. That’s not nickels and dimes we are talking about. Anyway, I did manage to find one thing out here cheaper—much cheaper. Lucid Absinthe which usually goes for $55-60 is only $45.99 out here. That’s incredible. I’m going to need to pick up a bottle before I leave even though I have some at home and it takes years for me to go through a bottle.

The Fine Wine and Spirits store out by the Hilton Garden Inn of Lancaster actually has a made-in-Pennsylvania aisle. There were some interesting finds to be had there, which I will blog about at a later time. I did manage to pick up a bottle of McClelland’s Highland single malt Scotch for $22.99. I was never much of a fan of this brand, but I’m not shelling out big bucks for other Scotches I can get much cheaper at home. I guess the most important question is, “Why did you even buy a bottle of Scotch in the first place?” Keep reading.

Before I complain, I’ll just say I love Hilton Garden Inns. Their bars are usually smaller and far from being stocked like regular Hilton or other hotel-brand bars are. But they have the basics and that is good enough for me. I don’t order anything crazy anyway, and most times I just tote my own booze along and avoid the bar altogether.

Last night, we went down there. I ordered a Johnnie Walker Black and the bartender said, “We don’t have that”. Okay then. How about Red Label? “We don’t have that either. I don’t think we have any Scotch.” There was a blank stare. I guess she was right. I mean, there was no effort to look or suggest another Scotch they may have. I went with my other go-to, a Maker’s Mark on the rocks—a half-assed bullshit pour if there ever was one. $7.50. Hey, for the price of three more I could buy a whole bottle. Meanwhile, my friend’s gin and tonic was put in the same kind of glass as my whiskey. A smallish rocks glass. Probably three ounces or so of tonic were kissed by some gin—an amount of alcohol so minuscule that a baby could have taken a sip. His clocked in at $5.50. “We’re going to the liquor store tomorrow”. If I wanted someone to put the screw on, I would have went to the nearest Friday’s.

On the bright side (and non booze-related) the restaurant at this hotel (Clyde’s) knows what they are doing. We ordered the bacon-bleu cheese fries through room service as a snack this afternoon and they were outstanding. Hotel food is something I always try to stay away from, but we figured we would give it a try. The fries were crispy even though covered in the tray en route. There was ample bacon, bleu cheese, and even some dressing. Not just good for a hotel. Good, period. 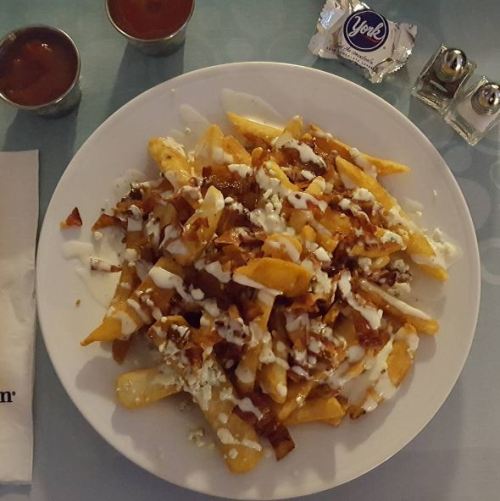