Moroccan Food at a Friend’s House 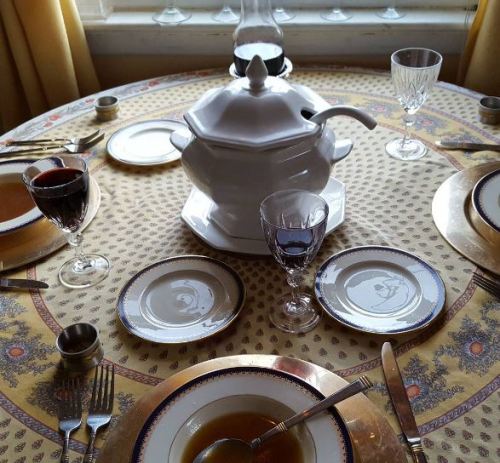 “You’re not really going to review my cooking, are you?” my friend Walter asked as I pulled out my camera and aimed it at the table. No, not a review, per se, but I did still want to blog about the experience. I met Walter through the Atlantic Highlands Historical Society last year. He wanted to have my mom and I over for dinner for some time. As it happens, we all share a common love of New Hope, Pennsylvania. Walter was the former manager of Wildflowers, a popular but now-defunct restaurant there, which featured an eight-page menu consisting of American, Mexican, and Thai food, among others.

Every time we meet, we always end up discussing what food we have been eating or cooking of late. Walter loves cuisine from all over the world, mainly because he has traveled the world. While lately he admits he has been into stir-fry, he wanted to cook us Moroccan fare in his Tagine. I was curious and highly interested because of how many Anthony Bourdain and Andrew Zimmern shows I had seen with this clay device in action. It’s conical-shaped, and basically acts as a steamer. Usually it goes in the oven, but he added an adapter to his so it could be used on the stove. The Tagine is a centuries-old method of cooking which originated in the north African country of Morocco. 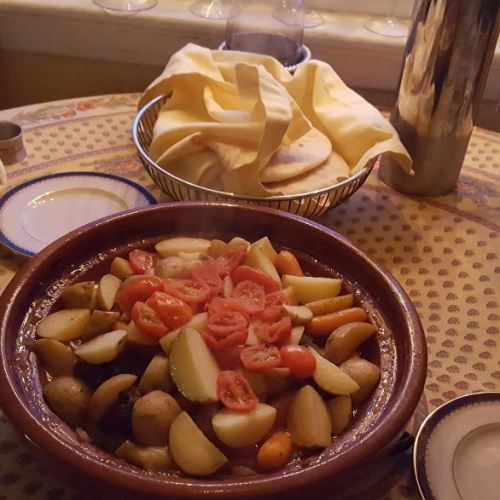 Into this oddly shaped pot went chicken on the bottom, covered with onion sautéed in garlic, and then mounds of tomatoes, potatoes, and carrots. He noted his original recipe called for only a half hour of cooking, but he kept going to about 90 minutes. The reveal, which actually is kind of grand seeing the large top come up, resulted in the table being covered in steam. When it finally wavered, the layered contents were visible. The carrots and potatoes were soft, and the chicken under all of that was fall-apart tender. Had it been left on the bone, it would have just fallen apart when picked up. The seasoning was reminiscent of the copious amounts of Indian food I’ve had over the years, just not as strong. The flavor managed to be potent and mild at the same time, if that’s even possible. A pleasant aroma and flavor which gently strikes the tongue as you dig in, with just a little bit of spice. There was also pita bread on the side we used to sop up the juices collecting at the base of the Tagine. 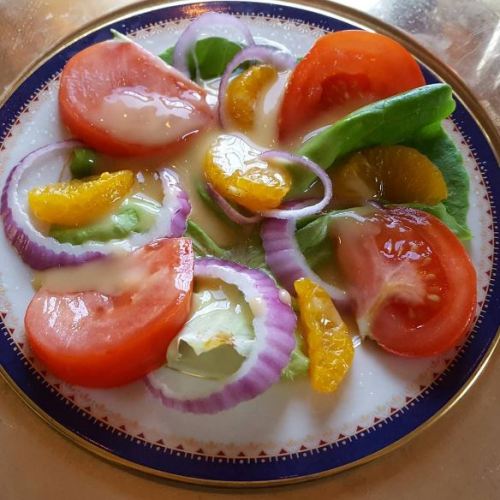 Prior to the entrée, there were two other courses. The first was a chicken soup, mostly broth with some thin noodles scattered around. It was fantastic. Salty and ultra-flavorful (derived from the chicken feet and bones he boiled down). The best chicken soup I’ve ever had. As an additional plus, I was battling an allergies-caused sore throat and congestion. Within five minutes of making my way through the bowl, I was feeling slightly better. He prompted me to have a second bowl (we all did), and literally I started feeling almost cured. My coughing suppressed, my congestion eased, and the next day, my symptoms were gone. Coincidence, or should I call Walter a food doctor too? Perhaps a little bit of both. After the soup came a welcomed cold and fresh salad to devour on an abnormally hot April night (85 degrees). A bed of lettuce was topped with red onions, tomatoes, orange slices, and a tangerine dressing. It was the perfect build up to the feast which was to come.

Dessert was a cake which I brought, but then after that, there was yet another course of Port Wine. Normally, Walter told us he would have served that with bleu cheese, but we were all so stuffed that we left that component out. Wine was very important on this night. I’m not much of a wine guy and if you sift through nearly 200 posts on this blog, you may not find an example of me drinking it. I’m a horrible Italian, I know. There’s a few I enjoy. The rest are just okay. But Walter had a Portuguese table wine which would work well with the food we were having. I liked it very much. After all, I’m not one to question someone who cooks like this. In fact, before we begun, he described his dinners as, “We talk, drink wine, have the first course, talk, drink wine, second course, talk, drink wine, main course, drink wine, talk, dessert, and more wine. Did I mention wine?” Since it was a work night, I could not knock ’em back as I would have wanted, but I think I had my fair share.

This was an incredibly enjoyable evening and dining experience—food worthy of being served at a restaurant. It’s not often you have a good friend who is also an excellent chef, former restaurant manager, and someone with so many stories and experiences from his time in the business. It’s something that a food blogger and friend cannot pass up. So as a joke, here you go, Walter: I give this night 5 out of 5 stars. Well done!