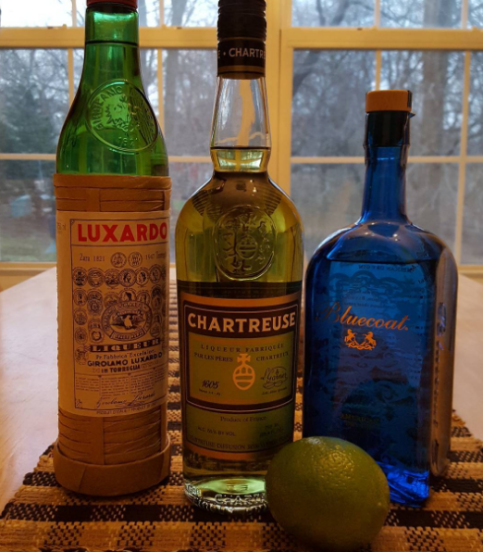 Like Absinthe, Chartreuse is one of those more mysterious spirits. It is produced in France, using a recipe more than 400 years old. That recipe is known by only two Carthusian monks at a time. They prepare the blend of 130 herbs which are steeped in alcohol. The product is either green or yellow Chartreuse, the former of which is more widely used. Green is more of a full-bodied spirit. Coming it at 110 proof, it is potent in an almost medicinal way. Since the product is made at only one monastery in the world, chances are you might not even see it on the shelves in your liquor store. When you do, the price is around $55—high, but you will use such a little bit at a time, and it will probably last you a while. I say the same about Absinthe. I am not a big fan of herbs. So I was surprised to find myself delighted upon my first ever sip of Chartreuse, which was at my friend Lynn’s house. It was mildly sweet, very pungent, and the alcohol kick subsides to an aftertaste of pleasantness. This was years after watching a food show where some dingbat host announced, “No one actually likes Chartreuse”.

There is such a complexity here, one you will not find with many other spirits. When it comes time to mixing into the most well-known (and century-old) Chartreuse cocktail, it develops even more complexity which will have your palate alive with vibrancy. It’s called The Last Word, possibly because of the amount of alcohol this little drink packs. The recipe is simple enough: one part each of green Chartreuse, gin, Luxardo maraschino liqueur, and fresh-squeezed lime juice. I went with one ounce of each, though some call for three-quarters of an ounce.

Unlike any other cocktail I’ve ever had, The Last Word hits you in waves. You will taste each of the four components, but at different times. First, ironically, is the lime juice. The freshness bursts in your mouth. Then comes the botanicals of the gin, which we all know is like a marriage with lime. Third is the herbaceous, angry-mule-alcohol-kick of the Chartreuse. Lastly, your palate eases with the sweetness of Luxardo. There’s so much going on that you will probably need three or four sips before you can even decide if you enjoy it or not. I’ve actually only seen this listed on one drink menu at a restaurant, and there was a disclaimer saying, “Only one per customer”. That might be a little overboard. If you have a full stomach like I had before trying this, you will be perfectly fine.

What exactly do we have with The Last Word? I’m going to need a few more tastes before I rank this with my all-time greats, but after my first try, I enjoyed it. I don’t want to keep drawing comparisons to Absinthe, but when all mixed together, I cannot help but detect the slightest hint of anise. It’s hard to believe this cocktail is well over a hundred years old. Such a pop of flavor combined with the “small batch”, almost hipster-like feel of Chartreuse makes this one for the ages. A drink which has and will stand the test of time.